Personally, I don’t care all that much for Shiori. But if you do, keep reading to see how she got herself stuck in this predicament!

— So how will Arato prevent Shiori from confiscating his precious Lacia? By intercepting an hIE from Egypt — the unit that has the same registration number as L–… this is really boring. Is there really no better way for this conflict to play out? Does it really have to come down to registration numbers? Yes, I know it’s likely that Lacia will end up fighting Methode at the airport, but why not just cut to the chase then? Why even bother with this convoluted business of grabbing some random ass hIE from Egypt in order to do an inspection?

— Oh my God, Methode goes and says the exact same thing immediately after the OP! Gee, why not just attack Lacia and Arato directly? I can’t wait to hear Shiori’s reply.

— She doesn’t want to engage in battle with so much uncertainty… but surely, introducing yet another element to the equation can only increase uncertainty! Look, you guys are going to battle. Face it.

— Lacia is apparently nothing special without her Black Monolith, and she can’t bring it onto the bullet train. I bet she somehow brings it along with her anyway.

— Not only that, Arato has enlisted Kengo’s help, who then calls up Kouka for assistance. So this is going to be one big reunion for at least three of the Lacia sisters.

— All Arato and Lacia has to do is erase the other hIE’s registration unit! It’s like stealing and reselling electronic goods! If you corrupt a chip and then scratch up the engraved registration number, you’re good to go. Apparently, there are absolutely no other ways to discern an hIE’s identity aside from those two methods. Amazing.

— We finally get a glimpse of Arato’s father when he appears on TV. He’s being interviewed about… important stuff. Some project involving 20,000 hIEs, but as soon as he starts getting into the details, Yuka starts opening her big mouth. She seems jealous that Arato might be spending time with Lacia. But aside from Arato, I thought everyone else thinks of these hIEs as nothing more than mere objects. What could she possibly be concerned about? Worst character on the show by far.

— The experiment sounds odd. Some hIEs will be hIEs. Others hIEs will be assigned human roles. These 20,000 units will then live together for a while. Once the experiment is finished, the hIEs that have been assigned human roles will then report their “disatisfactions and desires” to the mayor (also an hIE), who will then use the data to determine how hIEs and humans might coexist in the future. After all, humans currently see hIEs as nothing more than objects — tools to be used to their own ends. They wouldn’t want to participate in an experiment in which they have to coexist with “objects.” I’m not sure how the experiment will get around humanity’s inherent bigotry against hIEs, though. Furthermore, with all their technology at their disposal, I’m surprised they can’t simply construct a virtual simulation to gather their data. Instead, they will have 20,000 physical units pretend to live together. How do you even tackle such logistics? 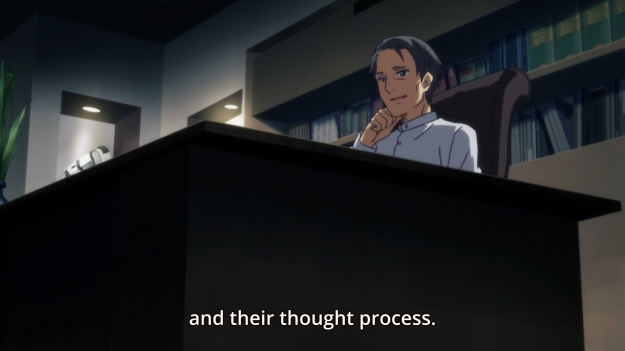 — The bad guy is watching the same program, and after he turns off the TV, he starts blabbering on and on about how it’s too late to even consider coexistence. After all, AI has surpassed human intelligence, so why would they want to coexist with us? My problem with this scene? Who the hell is he talking to? Why is he sitting in a dimmed office and talking to himself?

— So the bad guys wants to know the superintelligent AI’s thought process. This is why the Lacia-class hIEs have been sent out in the wild. Don’t you think there’s a better way to do this? Again, don’t you think you could simply construct a simulation to gather your data?

— Wait, what? What are these coins for? Is Lacia making a joke that just went over my head because I’m not familiar with these aspect of Japanese culture?

— Also, Lacia’s Black Monolith simply shows up in a car. I thought she and Arato had to race here on a bullet train just to arrive on time. Maybe Lacia already knew what would happen ahead of time, so she had her Black Monolith leave early. And if that’s truly the case, then hasn’t she already predicted what Shiori intended to do? Couldn’t she just screw with the whole registration number thing without even getting her master involved?

— In any case, the girl’s going to try and zap the registration number from a distance. Something something no scope.

— Wait, no, we are definitely relying on a scope. Lacia’s abilities are quite remarkable. Unfortunately, she seems content to play house with Arato. This is what you get to observe when you send superintelligent AI out into the wild. Other than Snowdrop, every single one of the Lacia-class hIEs have sought out a human to serve.

— Lacia’s shot ends up being blocked by (of course) Methode. Gee, it looks like we’ll have to fight after all.

— Anyways, our heroes will have to get closer in order to defeat Methode. Shooting her from afar won’t work. As a result, you have Lacia riding on top of the car while Arato drives it. You’d think a superintelligent AI like Lacia could just do both instead of relying on her human master to operate a vehicle under duress. Driving a car should be simple for her, right? It can’t possibly take up much of her computational power. I suspect we are only seeing this current setup because Arato needs something to do; he needs to appear as though he’s contributing to the battle even though he’s just a weak human.

— Lacia proceeds to turn the car invisible since Methode can’t attack them without direct sight. Despite being combat hIEs, I guess these units aren’t equipped with any other kind of vision (for instance, infrared).

— Arato then tells Lacia to move the planes in order to obscure Methode’s view! Then why are you still driving the car! There’s nothing he can do that she can’t do better… except for that whole accepting responsibility thing, and even then, I’m not so sure I’m convinced she can’t do that either. 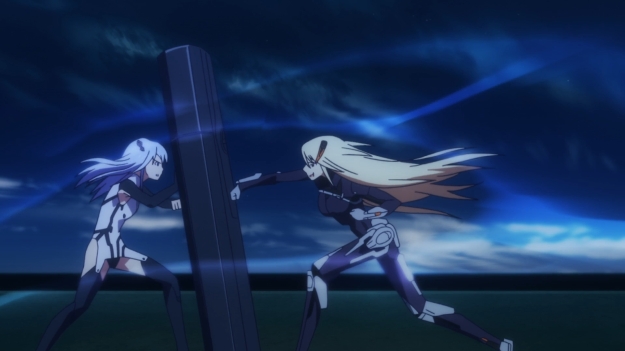 — We finally get our hIE-on-hIE combat, and it only took 14 minutes into the episode for this to happen. At the same time, however, Lacia tells Arato to retreat because she can no longer ensure his safety. But if she’s as superintelligent as they claim, then she should know that he would never abandon her. So is she just saying that to curry even more favor from him? Y’know, like “Oh my God, my hIE cares about me!” The other possibility is that she doesn’t know he would push on anyway, which is just stupid. But hell, you never know with this anime.

— Generic men in suits block Arato’s way. Oh no, is it too late?!

— Predictably enough, Kouka shows up in the nick of time to help the hero out. She then immediately engages Methode in battle. I thought she was going to help him out in terms of erasing that registration ID. Plus, where is Lacia? It’s almost like nobody even cares about the hIE from Egypt.

— So much for not wanting to draw attention when there’s a raging inferno all around you.

— Ah, it turns out that Lacia did predict all of Shiori’s moves ahead of time. No wonder she told him to retreat. She still should’ve known, however, that he wouldn’t. Anyways, Shiori’s assistant opens up the container to find that the wrong hIE had been shipped from Egypt. Not only that, all of the explosions now has Shiori trapped in the limousine. It can apparently withstand intense heat for half an hour. Someone just has to rescue her before that happens.

— But she’s been played. There’s an hIE that looks just like Shiori outside talking to people, and as a result, no one will bother with the limousine; they think that the girl is already safe. Methode knew that the whole registration thing would go badly. She also knew that Kouka would team up with Lacia. So why did she not warn her master? Because she wanted to get rid of Shiori while still maintaining the girl’s orders. Okay then.

— Methode claims that they all just want to survive. Well, the thought process for these superintelligent Lacia-class hIEs is not all that different from us humans then.

— Shiori looks really terrible here. Honestly, this whole episode is littered with terrible animation. It’s one thing if the action looks bad, when the character’s just sitting completely motionless and you can’t even draw her face properly, what the hell is wrong with you?

— In the end, however, Methode causes yet another explosion, and this one sends the limousine flying. Then after the credits, we see Arato rescuing Shiori from the car. So did the blast inadvertently send Shiori to safety? Or did Methode spare the girl? I’m not sure, but it’s probably not the latter. Even so, having Arato save the girl gives me qualms. Is she going to fall in love with him now?