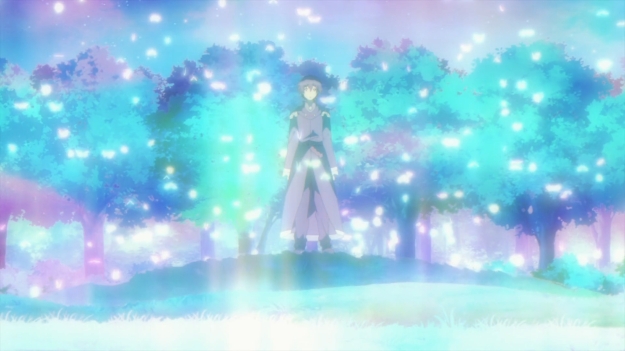 — Are we… are we back to taste-testing this MMO’s cuisine? This would make the anime more entertaining to watch, so no. One quick mention of a mutton dish is all we get.

— Simply by tipping the waitress, BBK causes her to fall in love with him. What a manly man. Then for some reason, BBK stands up and offers to treat everyone in the restaurant.

— After he finishes his meal, the waitress from before decides to make a move on him. Why? Because he tipped her? That’s it?

— The next day, the lolis are mad that he spent the night at a love hotel with some floozy waitress. Did they do the deed? Shrug, you can write your own BBK story.

— Yeah, say it louder for the camera, buddy. Wink, wink.

— As they try to depart, they come across a mean guy bullying a couple peasants. Considering how there’s actual slave-owning in this universe, this is really nothing.

— Apparently, the mean guy is also that city official from episodes and episodes ago. He takes one dirty look at BBK and leaves the scene.

— Our generous Mr. Money Bags then donates a magical potion to one of the injured peasants, which causes Arisa to whine about how he needs to keep some reserve for them. As a result, BBK is going to now stop in the middle of his journey just to make more potions. I thought he had to return elf-type loli to her home. Is that literally going to be the plot of this episode? Is that literally it? We’re on episode 11, and the show has no direction. The guy just does whatever.

— There are silly rules like how the potion has to be stored in a special vial or else it won’t keep its freshness. I’ve never seen this in any JRPG or MMO, but sure.

— BBK sees that he’s low on potion-making materials, so he decides that he’ll take a detour tomorrow. Again, I thought he was on a roadtri–… ah, it doesn’t even matter.

— More hot crafting action at night! It’s all all-you-can-craft episode! The guy ends up creating an explosion and spooking his lolis.

— In the new city, BBK bumps into that evil guy again, but he doesn’t realize it. After all, he’s got a hoodie! Hoodies make for excellent disguises! You also know he’s evil because he has a male slave. Don’t do that. Only villains would do that. Good guy BBK only has wholesome female slaves.

— There’s a terrible CG spinning globe in the back for no particular reason. It feels magical, I guess.

— Is this supposed to be a sex joke?

— For some reason, the wizard lady will only sell scrolls to BBK if he gives her some cores. Apparently, that’s illegal, so our hero returns later that night in this amazing disguise.

— Even later that night, we see BBK explore the darkened areas on his map on his own. His loli slaves have no clue what he’s up to. And now, you have tense animal-stalking action!

— He’s like one of those asshole tourists who can’t help taking selfies with the local fauna.

— Eventually, he crosses through a barrier and stumbles onto The Forest of Illusions. This triggers a battle against some armored enemies, but they probably don’t have souls. They’re probably just empty vessels created solely for battle. Needless to say, BBK meets the latest loli to add to his collection: a witch-type loli!

— Unfortunately, witch-type loli already has a keeper. Now, how do we get rid of this old hag…

— Oh, she’s already subservient. She saw that bell he had gotten from those rat dudes in last week’s episode, so she thinks he’s an emissary of Bolenan. Well, this makes BBK’s job a whole lot easier.

— There’s some boring stuff about how the old woman and her apprentice have to deliver 600 potions to a count every single year. She also teaches BBK a recipe in exchange for a favor: simply delivering some letter. Considering how she has magic as well as a giant-ass bird to fly her around, I don’t really understand why she needs BBK’s help. Hell, she even lights up a path through the forest to help him leave. What exactly does she need him for?

— The next day, BBK overhears a pair of evil men conspiring to commit crimes — crimes related to the old witch and her apprentice. If the witch fails to fulfill the conditions of the pact, then she’ll lose protection for her precious forest. As a result, the evil assistant viceroy can simply bulldoze her home and establish a new city for himself. Oh no, he’s an evil land developer! If only we could identify these evil men! Those damn hoodies are in the way, though!

— Although he is able to stop her pursuers, she still ends up crashing her wagon full of potions. If this pact is so goddamn important, why did the witch send a small child to do the job? It makes no sense.

— In the end, BBK and his lolis are only able to salvage roughly 120 potions. Thanks to dumping a bunch of character points into negotiation, coercion, and other speech-related skills, he is able to convince the evil land developer to let him craft the missing potions for the pact.

— But oh no, we need vials to store said potion! Oh no, we only have three hours until sundown! Good thing BBK had met a guy at the tavern who would teach him the wonderful world of pottery! So tune in next week for not only exciting potion-mixing action, but a mind-blowing pottery class as well! Or he could just find where the evil guy is hiding that stash of potion vials. Either or… All we need to know is that if BBK plays his cards right, he might even liberate witch-type loli from her keeper!