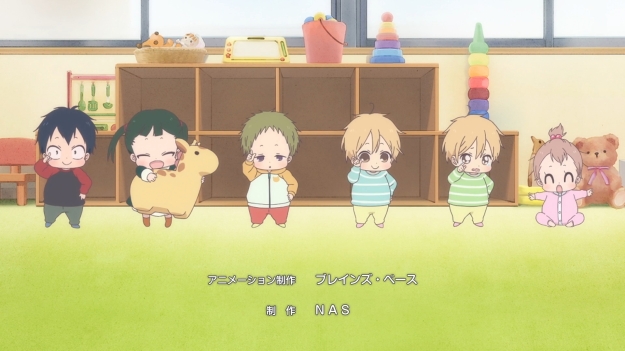 This is it, folks. No more babysitting after this week. Say goodbye to the little kiddies!

— Ryuichi’s friends invite him out to the movies, but he can’t leave his brother behind. This is where Saikawa comes in and offers to watch Kotaro for the night. Is this the first time we’ve seen Ryuichi do anything fun without his brother? I… I think so. All it took was, well, the very last episode.

— Even right before he leaves, the kid still offers to cancel. Saikawa, however, counters that it’s a priority for him to cultivate relationships with his classmates. The butler ain’t wrong. Ryuichi won’t be well-adjusted if the only people he ever spends time with are a bunch of toddlers, an abusive Hayato, and the battle-axe Maria.

— Look at that photoshopped pot of flowers.

— Seriously? You’re going to use a cat’s toy to entertain the kid? Sadly, it works.

— I don’t even know who these guys are. They’ve probably shown up in the classroom scenes, but I bet they’ve never had more than just a couple lines of dialogue per episode.

— Hayato shows up with a bite mark from Taka. Children who bite often have little to no self-control. Also, the kid grows up in a violent household, so yeah… The anime probably think it’s cute that Taka wants to be his big bro all the time.

— Man, I hate to have to agree with the child-beater.

— Saikawa is now training Kotaro to play fetch. He’s treating the kid like a pet.

— Kotaro eventually wanders into a mini-library, which triggers Saikawa’s memories of the chairwoman’s late son and daughter-in-law. The man is drawn like he’s in his late 40s at the very least. His wife, however, maintains her youthful beauty. Odd. We also learn that the chairwoman still cleans the room.

— Kotaro eventually picks out a book on love poetry for Saikawa to read to him. It seems like the kid’s doing perfectly fine on his own. The sight from the outside is almost enough to make the chairwoman think that her son and daughter-in-law have returned. I guess the show wants to make me tear up, but there has been absolutely no mention of the chairwoman’s dead family since the first episode. I’m not invested to any degree in this little subplot, but I guess it’s better than the ridiculous child-beating that we often see from this series.

— After the movie, Ryuichi takes off running, because oh my gosh, he’ll be returning slightly later than he had anticipated. It doesn’t help that Kotaro is sitting in front of the front door, waiting for his brother to return like some loyal dog.

— In any case, Ryuichi finally feels at home at the chairwoman’s place, so we get that ol’ “tadaima-okaeri” exchange. That wraps up the first half of the episode. Now for the very last story of Gakuen Babysitters…

— All of a sudden, it’s now Christmas-themed.

— Usaida teases Taka about Santa only visiting good boys and girls. This makes the kid cry, because everything makes him either scream or cry. So what happens? Hayato punches Usaida in the head. Ho ho ho, that’s so funny.

— Taka then asks his brother if Santa will come to their house, but this is Hayato we’re talking about. As a result, he tries to tell their presents have already been bought by their mother. Ryuichi freaks out, however, and covers up Hayato’s mouth. After all, you can’t shatter a kid’s dream or something. But growing up in an Asian household, Christmas was never a big deal to my family. I don’t know if it’s any different in Japan, but my mother never bothered to let me believe in Santa, the tooth fairy, or any of that made-up stuff. I feel like fried chicken is more traditional for Japan than Santa, but maybe I’m wrong about that.

— Well, we all know where this is going: someone’s going to have to dress up as Santa.

— Kirin’s dad is back for one brief scene, and he’s as gross and disgustingly over-protective as ever.

— Meanwhile, the girls are content to just spy on the toddlers as if they’re at a zoo. Don’t tap on the glass.

— That’s why you always use protection, kids.

— As you might expect, this guy immediately got a swift beating from his friends even though Ryuichi doesn’t even care. People are so quick to resort to violence on this show.

— At some point, the conversation turns to Ryuichi not having a phone. If you’ve forgotten, Kotaro had dropped it into the toilet. Ryuichi’s friends tell him to ask the chairwoman for a new one, but the kid’s such a saint, he wouldn’t dare ask her for anything.

— This is why we now suddenly see Hayato standing outside the chiarwoman’s office. I don’t know if we’ve ever seen these two interact before. Aaaaand… we don’t see them interact ever. We just cut right to the chairwoman’s home.

— Yo, that’s not fried chicken.

— Both the chairwoman and Saikawa are busy, so Ryuichi starts freaking out. After all, there’s no one to keep Kotaro busy while he tries to get into his Santa costume. Dude, at least eat the food first before worrying about becoming Santa.

— That’s when the doorbell rings and “Santa” shows up anyway. And of course, Ryuichi gets his new phone. Yawn. Is it over yet? 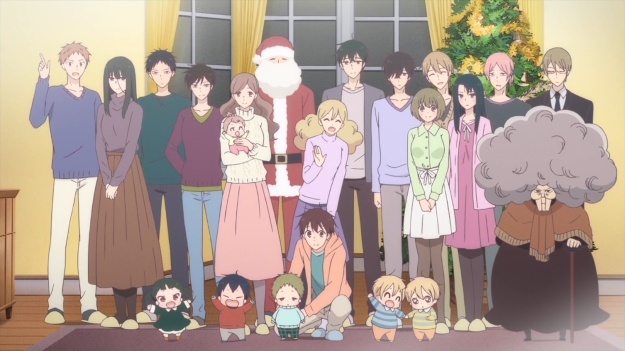 — Even in the final group picture, neither Maria nor the chairwoman will smile. In truth, I don’t smile either, so I can’t judge. I simply just avoid all pictures. But that’s it for Gakuen Babysitters.

Final thoughts: The show accomplished exactly what it set out to do, but what it set out to do wasn’t all that impressive to begin with: a cloying story about a saintly brother working part-time at a daycare room. Proper execution could’ve still saved Gakuen Babysitters from the trash heap, but there was no character development whatsoever. Even though we followed Ryuichi and Kotaro for an entire year, nothing important ever happened. Ryuichi’s struggle felt disingenuous, because we never ever see him act like a teenager. We never saw him try to juggle schoolwork, making friends, and babysit his brother. All we saw, actually, was the babysitting part. Being a teenager is difficult. You know it and I know it. We’ve all been there before. By focusing just on the babysitting angle, the story did itself a disservice. It failed to properly engage the audience by excising the one part that most of us could honestly identify with. For the most part, Gakuen Babysitters is your average, half-assed slice-of-life anime in a nutshell.

If I could just stop here, however, I would’ve given Gakuen Babysitters a C-grade. Unfortunately, that’s not all. The show also had a bizarre violent streak that it not only attempted to normalize but also play off as humor. There was a dash of sexism here and there, but I found it absolutely galling that we had to see Hayato punch everyone in the head from start to finish. I mean, if you want to talk about a lack of character development, you need not look any further than that guy.