For the most part, Shirase has recovered from last week’s events. How’s she doing? Pretty good, it seems. Pretty, pretty good. Out of nowhere, Shirase wants one of her friends (not Mari) to cut her long hair. In fact, she wants it trimmed all the way up to her shoulders. That’s a pretty drastic change, but y’know, maybe she wants a fresh start. Maybe Shirase feels a little more grown up after what she’s just been through. There’s also another really important factor. In last week’s episode, Shirase often spoke about a certain disconnect that she felt. She was retracing her mother’s footsteps, but she couldn’t get as excited as she thought she would: “The most I could muster was ‘Wow, it’s just like in the pictures.’” After finally breaking down and allowing herself to truly mourn her mother, however, it appears that Shirase can finally the greatest amount of appreciation for even the smaller things in life. Something as simple as a haircut is enough to make her beam. Essentially, she’s proud to be her mother’s daughter. It’s not that Shirase was ever ashamed of Takako. No, it isn’t that. She just always had a cloud over her head — a cloud of anger and sadness. It gave her the determination to reach Antarctica, but it also dampened her enjoyment of the trip and, well, life in general. But now, Shirase no longer has any baggage left to carry.

During the going-away party, Shirase stands before the entire team and delivers a speech that pretty much sums her the entirety of character development over the course of the series. She couldn’t fully appreciate Antarctica because she never got over her mother’s death. She never cried, so she never mourned. It was if she was trying to hold onto any tiny glimmer of hope that her mother would still be alive in Antarctica somewhere. But if you refuse to cry, you also refuse to hit the proverbial reset button on your emotional state. As a resulted, dark feelings built up inside Shirase until she became numb to Antarctica. Interestingly, a small part of her also resented her mother’s obsession. From a certain point of view, you could say that Takako’s love for Antarctica drove a wedge between her and her family. But after coming here and experiencing the awe-inspiring continent for herself, Shirase can understand the love that her mother must have felt. It wasn’t easy, and she definitely needed all of her friends to help her, but she can now honestly say that she’s finally moved on. 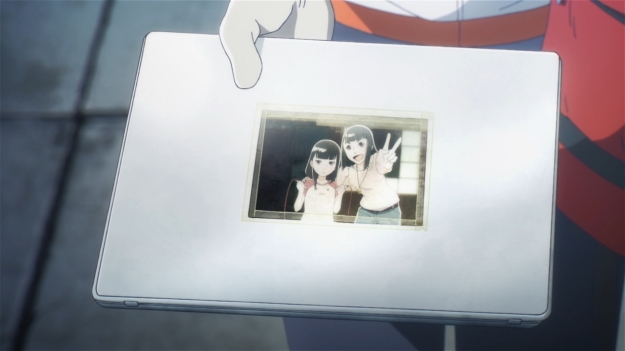 Off to the side, Gin can’t help but shed a few tears, which is rare because she’s often so stoic (even though she did shed tears in last week’s episode as well). What’s interesting from all of her flashbacks is how she initially resisted becoming any sort of parental figure in Shirase’s life, but Takako kept leaving Gin alone with her daughter. Naturally, the two bonded over time. She taught the girl how to jump rope, she taught the girl about Antarctica, and she also taught the girl about basic common sense like not giving money to strangers. This is noteworthy, because Shirase doesn’t have a father figure in her life as far as we can tell. In fact, it’s as if she’s been raised by two mothers. This is a low-key but fascinating element to Takako and Gin’s relationship. So fittingly enough, Shirase decides to leave her mother’s laptop in Gin’s care right before she leaves. Even though it was an unrealistic, one-in-a-bajillion-trillion hope, the girl had hoped to come to Antarctica to bring her mother home. But now that she’s returning home, this is her way of accepting the fact that her mother belongs in Antarctica with her other parent. It’s her way of letting go of the past.

Later that night, Gin takes a peek at Takako’s laptop. It doesn’t surprise me at all that she would know her late friend’s password. On it, she of course finds all of Shirase’s unread emails. More importantly, however, she sees something I never noticed: a curious outbound message. It was there in last week’s episode too, so I guess Shirase couldn’t spot it either. The girls are now on the boat that should take them all the way back to Fremantle. Now that summer has ended, Mari and the girls get to see aurora australis after all. All of a sudden, Shirase gets her mother’s last email. It had remained unsent for so long, but inspired by the girls, Gin helps the email complete its journey.

What a surprisingly great show. Let’s get the negatives out of the way first, though. A couple of the middle episodes flagged a bit, and I didn’t love the way they resolved Hinata’s subplot with her former track teammates. The animation is clean and the character designs are pleasing to the eye, but the show’s direction is relatively straightforward. But other than those relatively minor blemishes and nitpicks, however, A Place Further Than The Universe is a heartwarming, emotional triumph. I never thought I’d like one of these “cute girls doing stuff” shows, but this anime is more than that. It’s not just some aimless slice-of-life anime with no beginning nor end. It’s a coming-of-age story that combines friendship, loss, and a fantastical journey in one shiny Madhouse-animated package. And unless something drastically changes over the last few days of this winter season, I think it’s safe to say that A Place Further Than The Universe managed to deliver the highest emotional moment of any other show this season. I don’t think anything we’ll see from Violet Evergarden or After the Rain can compete with Shirase turning on her mother’s laptop and seeing all of her unread emails stream in.

— Mari woke up from the alarm clock and still managed to be late? Hmm.

— I bet the pork is half frozen.

— This is it. This is the denouement to mark the end of our journey.

— Some people feel the Calpis is too weak, others think it’s too strong. I don’t like Calpis at all.

— Yuzuki briefly mentions that she’s been interviewing people, which reminds me that the whole high school girls reporting and blogging about Antarctica hasn’t really gotten as much attention as I thought it would. For example, are they getting low views or high views? Is the public’s interest in Antarctica improving at all? Will this civilian expedition team fare better in the future? Maybe this episode will finally tackle those questions as we wrap up the series (note: it did not).

— Me too. Honami’s kinda childish, though. What’s her deal? We just never had time to devote to any of the side characters, so she and Nobue are kinda gimmicky. Honami cries a lot, and Nobue… well, she cries too but for her boyfriend Yuu.

— Even though we’re so far away from the characters, we know exactly who screamed this.

— Supposedly, you’re not allowed to remove anything from Antarctica, so they’re grabbing these chunks of ice to take back to the base with them. Thanks to its high air content, the ice pops in your mouth, so I guess it’s kinda like an icy version of soda.

— Since it’s technically summer in Antarctica, it’s only fitting for the group to enjoy shaved ice before the show comes to an end.

— Yo, that penguin is sneaking up on Shirase.

— Oh god, they dug a small trench just for nagashi soumen. It’s where noodles come flowing down a half-tube. I’ve actually done this before, and um… it’s novel, to say the least. I wouldn’t call it tasty, though.

— Perpetual day sounds like a pain, but I wouldn’t mind experiencing perpetual night.

— It slowly sets in for Mari that she truly has to leave soon, so she becomes a dreamer all over again. She suggests that the four of them could stay even longer. But of course, that’s an unrealistic. The premise is already outrageous enough as it is. They’ve been their families, friends, and of course, school. And that lady’s comment about readjusting to society isn’t entirely a joke either. They’re about to enter one of the biggest transitions in their lives. I don’t know about Mari, but I imagine most of these girls will want to attend college. She should too, but for some reason, I just imagine her finding higher education to be a chore.

— Oh yeah, Yuzuki’s got that drama she’s starring in.

— Still, she makes her friends promise that they’ll return one day for the winter. Sure, why not? Once they’ve all grown and taken care of everything in their lives, they can join whatever iteration of the civilian expedition team if it’s still around.

— The whole team plays baseball at the girls’ request. Wait, I thought this guy already got over Gin. He’ll probably ignite her “fighting spirit” or something.

— Shirase stands bravely in the batter’s box simply ’cause she heard her mother could hit Gin’s wild pitches. You don’t swing at balls, though.

— That’s high and in. That looks like a ball. Also, both her feet aren’t planted.

— I thought Hinata would try to demonstrate her running prowess by going after the ball, but she just lets it sail over her head.

— Naturally, no one wants Mari to come anywhere close to Shirase’s hair. I like how this anime likes to build on jokes from previous episodes.

— According to the sad guy’s bio, he’s apparently a big fan of Yuzuki, but he doesn’t have the guts to tell her. C’mon… you’re a grown man.

— I’d be surprised that there hasn’t been any signs of couples hooking up, but this is anime, after all. Can’t talk about the sex.

— Gin and Kanae almost don’t notice Shirase’s new hairdo. Those bangs, though. The show’s character design has a real obsession with bangs.

— Honami doesn’t know anything about Shirase’s story, so she wants to know if the girl cut her hair because of a broken heart. Hinata fittingly replies, “But maybe, in a way…”

— There’s no longer any discernible nervousness in Shirase’s voice when she speaks in front of the crowd. She does, however, has her head down.

— Most people have parting gifts for the departing girls. Nobue, the geologist of the group, wants the girls to hand her boyfriend a tacky, knitted sweater. Oh lord. Girl, green on purple is terrible.

— That’s one angry-looking penguin. Shirase has her usual reaction. It’s like she lusts after penguins.

— Kanae also reveals that the girls had given her the courage to continue with the civilian expedition team. If a bunch of high schoolers can make it to Antarctica, surely the adults can.

— As an aside, I often confused Kanae and Honami.

— Oh yeah, the girls have to take the boat back. Time to throw up some more.

— Shirase is still nervous about those reports, though.

— The girls plan on going on another journey, and Hinata mentions the fact that she and Shirase still have their savings. The latter quickly states, however, that she no longer has any of her money. Really? All one million yen?! I guess they’ll have to come back for it one day… or maybe that’s the Ainu gold…

— Every time Mari does something amazing, her family breaks like five dozen eggs.

— I was wondering why Mari didn’t meet up with Megumi… what a fitting comeback.

7 thoughts on “A Place Further Than The Universe Ep. 13 (Final): The end of the road”