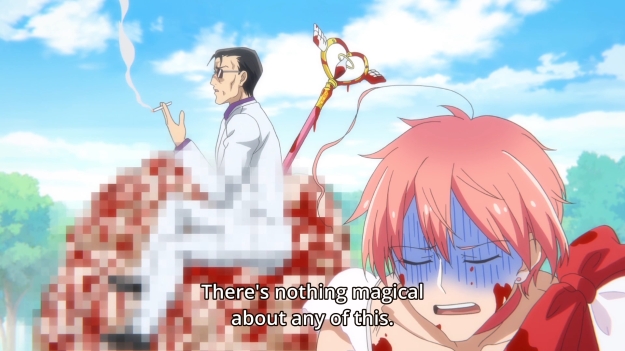 Once the novelty wears off, what you have left is a pretty boring show. I really tried to give this anime my fullest attention, but it probably would’ve been better served as a short. But let’s start from the beginning. At night, our heroine dreams of being a mahou shoujo, but during the day, she’s one-half of an unpopular idol duo. The other half of the group is her well-endowed best friend Sakuyo. Speaking of Sakuyo, Saki pines for her best friend’s older brother Mohiro. He, too, is an idol, and a very popular one in fact. Ironically, he has the personality of a tree stump. See? This show is already incredibly subversive. The story is flimsy at best; the girl is only in love with Mohiro because he’s the quiet type who once saved her in a generic anime flashback incident. It’s questionable if the guy even cares about the girl at all. Mohiro certainly seems more impressed with guys than girls. Nevertheless, she became an idol hoping that her senpai would eventually come to notice her.

One day, Saki returns home to find a yakuza screaming outside her home. He’s looking for her mother, and at first, our heroine thinks her mother was involved in something shady. The woman soon reveals, however, that she used to be quite the heroine herself. After all, every neighborhood needs to be protected, and the one that they live in is no different. Unfortunately, the mahou shoujo business is for young, cute girls and Saki’s mother is getting a little long in the tooth. As a result, the yakuza turns his attention to Saki. Our heroine barely has any time to consider the full ramifications of becoming a mahou shoujo when she learns that her crush Mohiro is about to be dragged to the underworld by a bunch of weirdly cute but simultaneously ripped demons. Saki has no choice but to transform into a mahou shoujo, and… well, you can imagine the rest. Eventually, Sakuyo also joins Saki in becoming a mahou shoujo, because she has a crush on her best friend. There’s some additional nonsense like how Mohiro’s partner is likely the bad guy pulling the strings in the background, but at this point, who even cares? 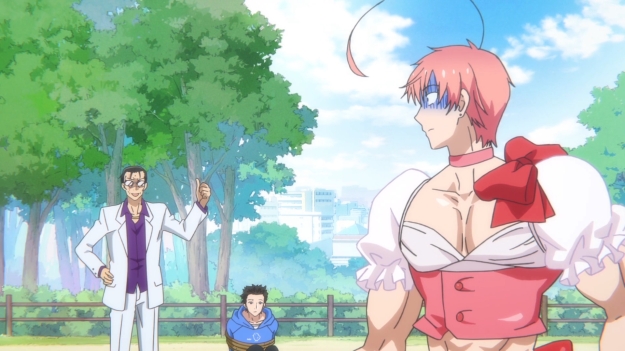 Phew. That was boring. It was so boring that I struggled to even get through the first two episodes. The primary problem is that the jokes suck. There’s no real comedic timing, and the gags either fall flat or are just plain dumb. For instance, Saki never leaves home without something to munch on… like a huge plate of pancakes! Or this bowl of rice, soup and salmon! Haha, what a topsy-turvy twist on the classic anime toast! The second dish legitimately looks tasty, but that’s beside the point. Shoving bulges in my face over and over doesn’t make it funny. Adding blood to the violence doesn’t make it funny. Tentacle rape doesn’t magically become funny either just because a dude is now involved. The screaming yakuza mascot also wears thin by the second episode. This is a short post, because I have nothing else to add. Lest you think I’m offended by this show, I’m not. If anything, it plays it too safe. Mahou Shoujo Ore is simply pedestrian.