It’s probably a mistake on my part to start blogging this show, since by nature, shounen stories are designed to move at a snail’s pace. Still, let’s see how far I can go before I throw in the towel.

— I wish the bad guys would get more character development. Being a hero is all fine and dandy, but I’m often more fascinated in not only what would make someone turn to evil but also stay there.

— Deku blushes when Uraraka gets close to him, then she starts blushing in return when she remembers that she might actually like him. Yep, that’s it. That’s all you going to get, folks. Come back in a bajillion episodes if you want to see if their relationship ever goes anywhere. That’s the curse of shounens. On the plus side, at least Deku isn’t pining for a girl who prefers his edgy best friend.

— I’ve pretty much forgotten almost everything about Class 1-B. Can you blame me? Who can keep so many Quirks straight in their heads? This is why the show always quickly reminds us what some rando character can do, but it’s quickly forgotten anyways.

— So these ladies will help train the kids, and according to Deku, this is their 12th year on the job. That means they’re like… in their 30s? No matter this lady is so mad. So is it impossible to update your costume or something? Do you always have to prance around in the same outfit that you wore as a kid?

— Then we have some punk kid with a Jojo hat. Okay then.

— Basically, Class 1-A has to make their way to camp, and they’ll have to cut through “The Beast’s Forest.” Just one beast? Anyways, one of the Pussycats can apparently control dirt. Nice. Dirt.

— The texture on that cliff wall looks as equally terrible as the treetops. Yeesh.

— The worst character needs to pee, but he quickly runs into this monster made out of dirt. Deku doesn’t hesitate to save the pervert, but I wish he really hadn’t. It’s not like the adults would have let anyone die anyways.

— Pixie-Bob? The blonde lady who got mad at Deku is named Pixie-Bob? Isn’t that cute cat? Oh, right… they’re the Pussycats. Hah.

— According to Aizawa, this particular class is getting an accelerated education program, because the bad guys have become more active than ever. I’m more amazed that none of the kids’ parents have tried to pull them out of the school.

— Instantly, the four hero bros leap into action and take down Pixie-Bob’s first dirt creation. You know who they are. They’re the ones who have hogged the spotlight since the start of the series. Honestly, Deku is the hero and all, but he’s got the most generic power. Too bad it seems to be one of the strongest, because, well, he’s the hero.

— Luckily, we get to see the rest of the kids demonstrate their abilities as they make their way through the forest. Still, this feels like a montage crafted simply to remind us what each of these kids can do. Hopefully, the anime will have gotten this out of their system, and we can pick up the pace.

— Damn, who pissed in this kid’s cereal?

— I never like these training episodes anyway. There are too many characters, so there’s rarely any meaningful character development. Honestly, I don’t care about the bit players. It’s like watching Dragon Ball for Yamcha.

— Oh look, the four hero bros continue to receive all the praise!

— Deku, dude, get a longer tie… or just don’t wear one at all. Look at Bakugo. He’s an ass, but he looks way cooler than you. Image matters!

— If you really wanna be nitpicky, your tie should ideally reach your belt. But what am I even doing talking about ties? I guess I just don’t have much else to say right now. Not until the villains make their move, anyway. 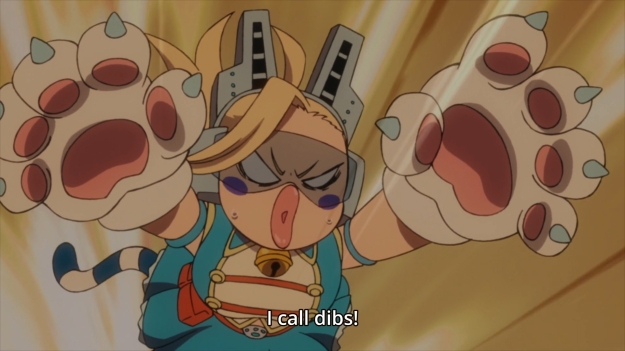 — So Pixie-Bob starts embarrassing herself around the four hero bros, and her partner simply says, “She’s a little desperate, since she’s about the suitable age for, you know…” Ah anime, never change.

— Deku tries to befriend the mean kid, but he quickly gets a punch to the balls. Wow. Rude. But this gets us the best line of the entire episode.

— Still, the episode is more than half over and barely anything has happened.

— Even the gyoza gets the same lazy coloring treatment as the cliff walls and treetops!

— Deku is really obsessed about Kota. Like why do you care so much? So what if he hates heroes? Lots of people hate heroes. Let them be.

— Oh good, there’s going to be a hot springs scene. That means the worst character gets to have lines.

— Haha, some kid violating the girls’ privacy is so funny! What a great joke! 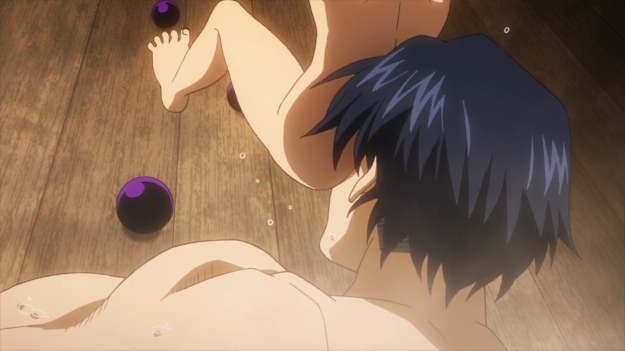 — The invisible girl is clearly the hottest.

— Anyways, Kota trips and falls, so Deku has to save the kid. He then brings Kota to the Pussycats and we get a heavy dose of backstory. Again, Deku is really concerned that a child doesn’t care for heroes. I dunno, I just find it odd.

— Aw man, Kota’s a jerk, but I get how he feels. His parents were heroes, but they died in the field of battle. As a result, the kid ended up becoming an orphan. Look, if you’re hellbent on being a hero, maybe you shouldn’t have kids. At the very least, if you’re going to have kids, you should retire and find a “boring” job. Sure, sure, if you have the ability to save lives, you should do so. But isn’t it irresponsible to bring a life into this world only to abandon it? In terms of utility, being a hero that can save society easily trumps being a parent to a single child. Then again, utility would also tell you not to have that kid in the first place. Of course, Kota’s parents didn’t plan on dying, but something has to give. You can’t do it all. You can’t be the greatest hero and also the greatest parent all at the same time. Something has to give, and sadly, their decisions eventually led up to them abandoning their kid. That sounds harsh, but I’m frustrated with people’s selfish desires to procreate. People have kids for all the dumbest reasons. Oh, it’ll save our broken relationship. Oh, we need to continue the family name! Oh, we just want kids even though we can’t provide for them. Selfish, selfish, selfish. Lives are too precious to be created on a whim. 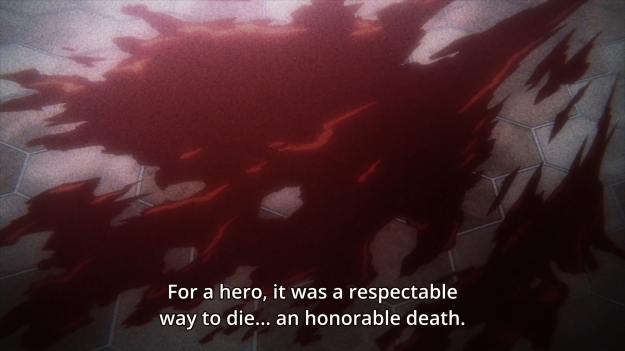 — Maybe I’m just biased. After all, I don’t plan on having kids. Even though they don’t exist, I can’t bear the thought of letting them down.

— In the morning, Aizawa has Bakugo chuck the same ball from the fitness test (episode 5, I think). The kid only manages to best his previous record by four meters. Well, it’s only been three months since they started attending this academy. As a result, their Quirks have barely developed. So yeah, more training to follow. I can only wonder when the bad guys will finally strike. For now, however, this episode was a bit dull.