I don’t know how I’m supposed to feel about this anime. I was hoping for wall-to-wall tension as Sugimoto and Asirpa raced for the hidden gold. What I got instead — for this week anyways — was goofball humor mixed with Asirpa’s good ol’ survival tips.

— Right off the bat, Asirpa drools as she teaches Sugimoto how to trap squirrels. We’ll soon see, however, that squirrel traps are surprisingly effective against humans as well.

— Animation-wise, Geno Studio is not off to a hot start.

— So our duo visits Otaru, one of the largest cities in the Hokkaido region. According to the narrator, it was once considered “The Wall Street of the North.” Huh, I wonder what’s happened to it since then. After all, this is actually the first time I’ve even heard of this city. I’m no expert of Japan by any means, but still, that’s quite a fall from grace.

— Basically, it’s information-gathering time. Sugimoto hits up the communal bathhouses while Asirpa pesters random people on the streets. Unfortunately, none of the escaped prisoners are dumb enough to show their skin around town.

— Luckily for them, one of the prisoners has decided to come to them. Armed with just a gun, this guy thinks he can get a jump on a trained soldier and an Ainu hunter. Granted, he doesn’t know he’s up against the “Immortal Sugimoto,” but still…

— Oh yeah, he also gets caught in a squirrel trap. I mean, it’s not like the wire is even super thin. 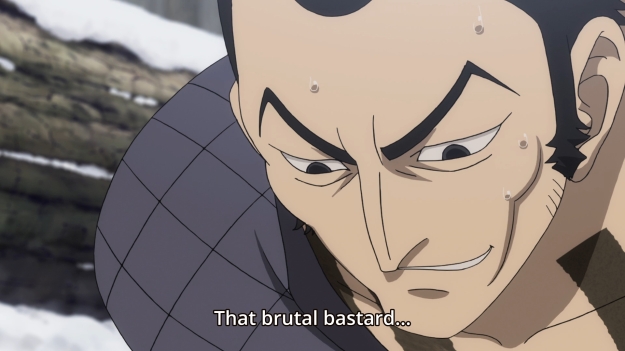 — According to the prisoner, they had all planned to stick together until one of them started trying to kill everyone. In other words, he realized that you needed to skin people to decipher the map.

— Unfortunately, Sugimoto can’t get anymore information out of the guy, because Asirpa is quite the pacifist. I guess that’s to be expected. The girl is apparently adept at drawing, so whenever they manage to catch a prisoner, they’ll just have her copy the tattoos onto paper. Still, don’t you think it’s unwise to free a dangerous criminal? Does she really want to risk having them come after her and Sugimoto later?

— This is what I’m talking about. Random bits of humor is fine and all. But this show has a lot of these goofy moments. Plus, there isn’t really a whole lot of danger in the story. I just feel vaguely bored and disengaged while I’m watching this show. Last week’s episode worked, because there was first the mystery of who had killed the prisoner, which was then followed by a serious battle against a bar. In this week’s episode, we’re catching prisoners with squirrel traps, then making squirrel meatballs. No, really. Squirrel meatballs. We’ll get there.

— Anyways, the prisoner bites it when someone suddenly snipes him out of nowhere. To make matters worse, his blood somehow gets all over Asirpa’s sketch. Whoops.

— A hooded figure is our shooter, and at this point, I got my hopes up a bit. Finally, we’re going to get some serious excitement, right?

— …aaaand he falls for a squirrel trap, too. 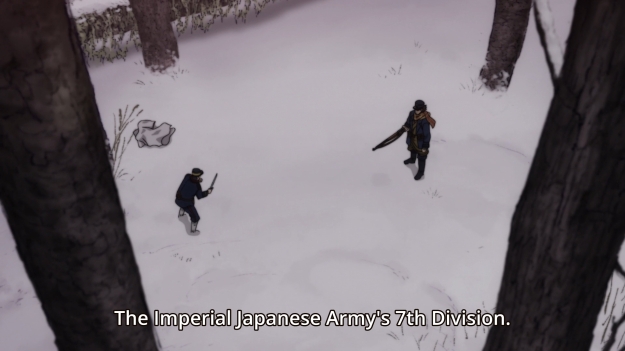 — He only loses his gun, so he’s not completely defenseless just yet. He and Sugimoto will still have to throwdown. But then the narrator suddenly chimes in out of nowhere to tell us that our uninvited guest is a soldier from the army’s 7th Division, aka the most badass, super duper division of them all! I’m sorry, but is this really information that I needed to know? He’s a soldier, so I know he’s trained. I know he’s dangerous. I just don’t really see why you need to break the flow of the storytelling in order to inform the audience of such an inconsequential fact.

— Yes, I know that the 7th Division is also after the gold. But so what? It could be any division, and the effect would still be the same.

— Look at this guy’s face. Like is he really that emotionless or is Geno Studio just fucking this up?

— Sugimoto: “There’s one way to not die that I learned in the war. Don’t be killed.” It’s true. People die when they are killed.

— The soldier eventually falls into a river, and Sugimoto assumes that he’ll soon die. As a result, he and Asirpa can rest easy and retire to their spacious hut. Looks like a tight fit.

— And now, we get to Asirpa’s Surviving the Wilderness TV special. What’s on the menu tonight? Squirrels, of course! Tune in today as she teaches you how to skin, gut and cook a squirrel! We’re making chitatap, an Ainu delicacy! Don’t worry, it’s more than just steamed ham! 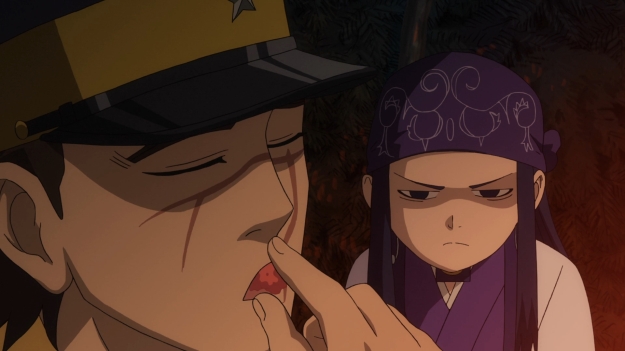 — The guy doesn’t care much for the brain, but he definitely approves of the chitatap!

— Is it really safe to light a fire in a hut made out of leaves? I wouldn’t really know. You’d never catch me camping, and I was one of the few people who refused to watch Yuru Camp last season.

— Elsewhere, the 7th Division manage to fish up that soldier that Sugimoto had just dealt with. Welp.

— The next day, yet another prisoner falls into a squirrel trap. Like seriously, what is this?

— But this guy is apparently some sort of Japanese Houdini. He manages to slip away while our heroes were distracted by a rabbit.

— Now, at this point, I thought that Sugimoto would give the prisoner a chase, and they’d both run into the 7th Division. They would then have a tense battle for their lives or something. But no, these two idiots fall into a river, then they start desperately trying to start a fire before they succumb to hypothermia. Hey, this could be a tension filled moment, too! Eh, not so fast, my friend! The story takes on a decidedly silly tone as these two comically stumble around in their efforts to keep themselves warm.

— And just look at this. From this angle, the goofball prisoner is making a face right at Sugimoto. But when we cut closer, he’s just dazed, staring up into the sky.

— Eventually, the prisoner somehow regurgitates a bullet that he had swallowed, and the two men use that to start a small campfire. Just look how happy they are.

— Sugimoto then hears all about how the lead prisoner — the one that had broken them all out of jail — is apparently an old badass dude. Like, we can’t just have dangerous criminals on the lam. They also have to be anime supervillains.

— Then we cut to this guy in the 7th Division! What the hell? He looks like a Bleach villain reject!

— Well, that’s the end of our episode. I wonder if Asirpa ate that rabbit without Sugimoto. Anyways, I just wanted something decent to watch on Mondays, but it doesn’t look like Golden Kamuy is going to deliver.