If you ever want to score some cheap points with the anime-viewing audience, just say that your favorite food is curry. This saves you the trouble of having to be creative. When Little Aoi was on the verge of death, she actually asked the ayakashi if she could eat her mother’s curry and rice. If you watch nothing but anime, you’d think that Japanese curry is the food of the gods. Every goddamn anime character lists it as their favorite food. So when I finally got the chance to try Japanese curry, boy did it not live up to the hype. Indian curry is so spicy! Thai curry is so fragrant with all the herbs and coconut milk! Japanese curry is… salty? “Roux-y?” Don’t get me wrong, it’s fine. If you put a plate of tonkotsu curry in front of me, I’d finish it no problem. But it’s probably the last thing I’d ever get at a Japanese restaurant. It’s just the hype is so crazy. During the Mawaru Penguindrum craze, I even remember seeing bloggers put up photos of their attempts to make Ringo’s curry. Sorry, just felt like going on a mini-rant. Let’s get on with the rest of the episode.

— For doing a good job feeding the chicken man last week, Aoi gets a makeover! Guuuuurl, you look so fab~!

— It’s interesting that these faceless girls don’t freak Aoi out one bit. Try to imagine a person standing in front of you, but simply lack any facial features. Where you’d see eyes, a nose, and a mouth, there’s nothing but flesh. Go ahead. Don’t tell me you wouldn’t find it unnerving.

— She then gets this hairpin, which will magically bloom overtime. Sounds cool, right? Not exactly. When it blooms completely, it means that Aoi’s time is up. Odanna teasingly reminds her to pay her debt soon. Oh boy, it’s almost like Beauty and the Beast.

— But none of this interests me. I just want to see the girl open a restaurant. I want to see the menu she’ll put together, the staff she’ll hire, and how she plans to operate it. The romance in this show is the last thing that I care about mostly because the girl is stuck in a situation that she never wanted. 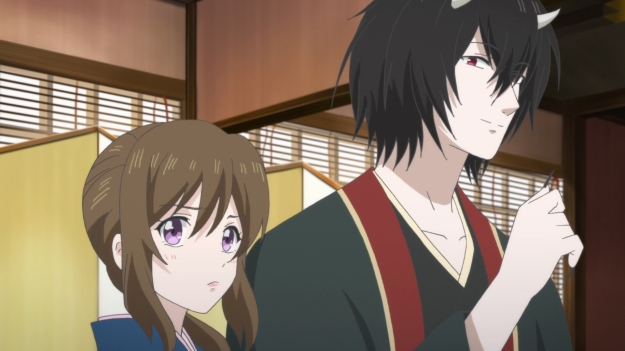 — And I think that’s why shoujo romances never quite appeal to me. The heroine almost always finds herself in the less and ideal situation, and she’s supposed to just bear it with a smile and make everyone around her happy. Take this very anime, for instance. Aoi simply has to repay the debt, no ifs, ands, or buts about it. If you thrust that fate upon me, I’d come away very bitter and resentful, which is why I can never relate to a heroine like Aoi.

— This is apparently the capital of the hidden realm where the king lives. In fact, the whole place seems kinda small. On Earth, you can blast off into the sky and eventually reach the mind-warping vastness of space. I wonder what would happen if you tried the same thing in the hidden realm. It’s probably not even possible, huh?

— When Odanna gets off the ship, some random nobody yells out, “Such a fine ogre as always!” I’ve no clue what that even means, but it’s nice to see that the ayakashi also foolishly worship celebrities like we do. I’ll never understand why anyone gives a shit about famous people, but I suppose it’s just our version of hero worship. Maybe the problem is that I don’t actually have heroes that I look up to.

— He puts Aoi in such fine clothes, but then this is the mask she’s supposed to wear to disguise the fact that she’s human.

— It’s… a bowl! Odanna offers to buy it for Aoi, but I dunno, man… sounds like a ploy to rack up even more debt.

— The girl doesn’t say no to free food, though.

— Aoi then tries to make small talk by asking Odanna what he likes to eat. He replies, “If I had to choose, it’d be the blood, entrails, and such of a young human girl.” Uh. Yeah. Check please.

— But seriously, you never know what you’re going to get. One minute, he’s showing you with fine clothes and jewelry. Another minute, he’s threatening to eat you. How exciting! I love how these bipolar relationships are mistaken for passion.

— Aoi then meets Suzuran, a geisha who apparently has a long history with her grandmother. Man, Shiro really got around.

— Afterwards, the girl turns around for a brief second, and just like that, she’s instantly separated from Odanna. This is such a silly and lazy plot contrivance. Only in fiction do characters lose each other that easily. All of a sudden, a convenient breeze knocks her masks off, and she quickly finds herself surrounded by a bunch of ogres hungry for human flesh. Luckily for Aoi, one swing of her pot leaf sends them all flying… literally. I mean, I knew pot gets you high, but damn… chicken man really hooked her up.

— The girl doesn’t like to keep her nose out of trouble, though. Y’know, if a bunch of ogres just tried to eat me, I’d be like, “Okay, I’m done. Get me outta here!” As for Aoi? She sees a mysterious figure disappear into a dark and scary alley, so she decides to follow them!

— Her reward is finding out that Oryo was the culprit. You’ve ever had someone be so jealous that they tried to have you eaten in public?

— That’s when Suzuran suddenly comes running down the same dark alley. She’s being chased, because she’s been sold into marriage to some jerk. What a shitty world. I feel like Aoi doesn’t seem to care enough about the fact that her gender can be bought and sold in the hidden realm. Hell, she was put up as collateral! Yes, I know this sort of thing can happen in the real world, but not in developed countries like Japan. As a result, there’s just this weird cognitive dissonance in the heroine that I find difficult to accept. It’s like how the main character in Death March to the Parallel World Rhapsody is magically transported into a world full of slavery, and not only does he not seem to care all that much, he ends up becoming a slave owner himself! Aoi should be very mad that her own autonomy has been stolen away from her just because her grandfather was frivolous with money. And yet, I suspect that neither she nor this show’s intended audience are losing any sleep over this precisely because Odanna is hot and apparently a self-made ogre who can pluck flaming arrows out of the air. Imagine if he wasn’t, though. If she had been hitched to an ugly bastard instead.

— Odanna’s argument: “It seems that Suzuran doesn’t like you. Isn’t forcing her to marry you a little selfish.” Dude. Dude. Aoi simply quips, “Look who’s talking!” I care more about the fact that she’s forced into marriage than she is!

— In the end, however, Aoi is the one who saves the day by relying on her pot leaf again. Odanna then introduces her as his fiancee. What a fucking hypocrite. But he’s so dashing; she’s too swept up in his charisma to even protest.

— I feel short-changed. I thought we were opening a restaurant.

— Uh oh, Oryo’s in trouble. Even Odanna starts yelling at her. Her punishment? She’s now trapped in her room. What a shitty world.

— Aoi then asks Ginji if he has any suggestions for the menu. He goes, “Let’s see… Curry and rice, maybe?” Oh lord. Aoi even plans to make it sweet by adding fruit. Oh lord.

— Gosh, how did Ginji know that she liked curry and rice?! But before we can answer that question, Kasuga shows up with an unconscious Oryo in tow. Oh no, not Oryo!