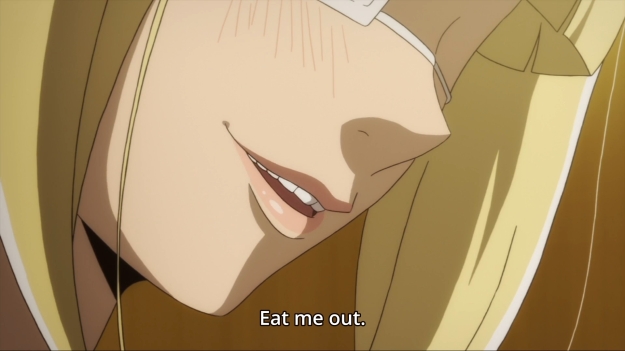 This is one of those shows in which everyone kinda sucks. The protagonist isn’t bad, per se… but she’s not particularly endearing either. It’s just one unending suck after suck.

— We open with a Seiya, a male host, trying to trick Ayaka, one of his customers, into losing a duel; basically, he wants to make her his slave.

— I hope they explain why she has an eyepatch.

— Of course, she catches on quick to what he’s trying to do, so she opts instead to win against him. So why did he do this? Why did he risk it all in an attempt to enslave this girl? Oh, no particular reason. He simply found her annoying. He was hoping to just make her hand him money without him having to deal with her shit. This is why this dueling thing is so dumb. The risk vs reward just doesn’t make sense. Whether or not she becomes his slave, she would’ve given him money anyway. The only difference is that he would’ve had to work for it… but, like, that’s his job. All he gets is the peace and comfort of not having to deal with one annoying customer for… what? An hour a night? On the other hand, what he ends up losing is, well, everything.

— First, the girl makes him eat her out right there and then. It’s one of those murky things where it’s rape, because he doesn’t want to do it… but then again, he’s doing it because he technically feels obligated to per the show’s specified rules from last week’s episode. Nah, let’s just call it rape. Nevertheless, I feel no sympathy for the guy, because he wanted to enslave her in the first place. Play stupid games, win stupid prizes. 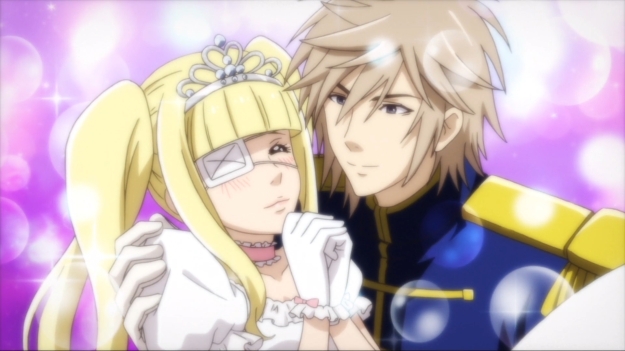 — Of course, Ayaka is no genius by any means. She’s a complete fool. She honestly thought that she had any sort of connection to this dude. This whole thing reminds me of The Great Happiness Space, an interesting but sad documentary that I saw about male hosts. On the one hand, these guys are obviously taking advantage of some very emotionally vulnerable women. On the other hand, where do we draw the line? At what point do we say that personal responsibility takes over? We can’t keep victimizing everyone. They chose to hand their hard-earned money over. They’re big girls. They can make their own decisions in life, right? Well…

— According to anime, all women wear tie side panties. In practice, however, I’ve never seen any of my partners wear one.

— Anyways, we cut to Yuga and Eia. The guy has an app that can help him locate other SCM wearers. Isn’t that convenient? Also, if you’re in close proximity to another SCM wearer, the device will vibrate. The company behind the device really thought this out.

— Meanwhile, Ayaka has forced Seiya to break up with his current girlfriend, so she can move into his place. So again, risk vs reward… even if there was a 99% chance of victory, I wouldn’t risk it. Slavery, man… it kinda sucks. And yet, none of these characters really take it all that seriously.

— Anyways, the very people that Yuga manages to find on his app are Ayaka and Seiya. As a result, he and Eia drop by the club to spring a duel on both of them. I don’t know why Eia has such a shit-eating grin on her face, though. Before we continue any further, right off the bat, I’m thinking, “Just because you want to duel me doesn’t mean I have to accept. Like… who gives a shit that you want to duel me? Fuck off.” Ah, if only our characters were that pragmatic, huh? 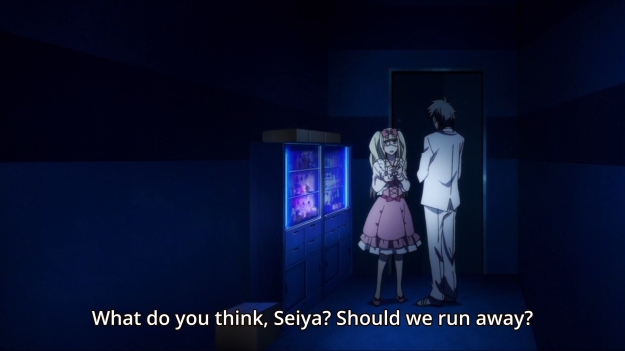 — Of course, we know what Seiya is up to. It doesn’t take a rocket scientist to realize that he wants to get out from under Ayaka’s thumb, so he’s obviously going to trick her into accepting the duel. But why is the girl so dumb? He’s all, “If we run, they’d probably find us.” But so what? What the hell are they gonna do? Keep pestering you for duels? Oh no! Ah well, dumb girl is dumb.

— The proposed game is some thumbs-up game? Never heard of it. Not gonna waste any brain cells thinking about it either.

— Seiya probably knows that the girl is dumb, so if he can simply trick her into playing, she’ll eventually lose. And lose she does. Both he and Ayaka become Yuga’s slave. Ayaka demands to know how Eia could remain so calm during the duel, so she reveals that she was never wearing an SCM in the first place. Alright… first things first, if you’re going to accept a duel, make sure everyone in the room is wearing the damn device.

— Much to Eia’s dismay, Yuga won’t release these two. Instead, he keeps them on as slaves. He tells them to return to their normal lives, but they’re still his slaves. He tries to assure Eia that he won’t hurt them, but yeah… yeah… she’s going to keep hanging out with him though, so she’s complicit.

— Seiya later apologizes to Ayaka for punching her, but… whatever. 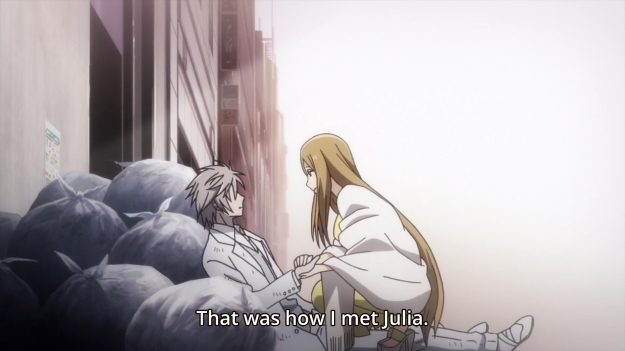 — For some reason, we then get his backstory of how he met Julia, the girlfriend that he had to dump. This, of course, just makes him even less sympathetic, because he risked a great relationship for cheap money.

— All of a sudden, she shows up behind him and reveals a tattoo on her arm. Apparently, she now belongs to some dude who goes by the name of Ryuuou. Hoo boy, anime sure loves its NTR. Next week’s episode is probably going to be full of Julia being forced to do some trashy shit, huh? Ehhhh. I’m thinking about relegating this show to the “Everything Else” weekly post. I don’t really wanna do three updates every Thursday night. Obviously, I’m not going to drop Megalo Box, and between this and Wotakoi, the latter is obviously far more enjoyable to watch. Hm, we’ll see.