I’d be so screwed if all it takes is eight seconds of continuous eye contact to fall in love with someone.

— The episode opens with Nyanko Big sitting on top of a sleeping Mitsuyoshi. The cat wants him to wake up and feed it, which is pretty typical. Luckily, my cat doesn’t do this. She doesn’t smash her belly all over my face either. Oddly enough, she respects my space while I’m sleeping. It’s a whole different story if she knows I’m awake, though.

— For some reason, this episode is accompanied by Nyanko Big’s narration. It’d be cuter if the cat didn’t talk.

— This smorgasbord is apparently what Teresa gets to have this morning for “breakfast.” Disappointed with his dry food, Nyanko Big takes one gigantic leap of faith. Even if he was in shape, he’d never make that jump.

— Alec has obviously never been around cats. You don’t grab them like this. I’m surprised she didn’t get the cat’s claws to the face.

— It’s Saturday morning, so Mitsuyoshi is manning the store alone. Apparently, coffee shops are slow on Saturdays? That doesn’t sound right to me, but whatever. Being the kind-hearted airhead that she is, however, Teresa volunteers to help. And wherever she goes, Alec goes. She’s just got that magic quality about her. 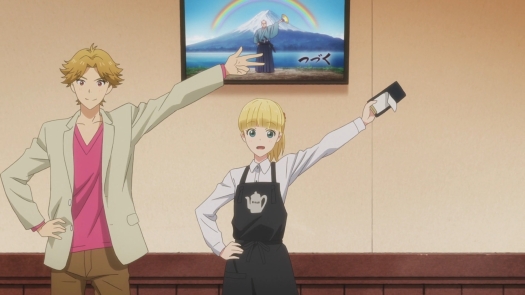 — The show’s kinda about nothing. It’s really about Mitsuyoshi and Teresa slowly falling in love, but unlike other romances, there is absolutely no conflict to be found in Tada-kun wa Koi wo Shinai. If you’re tired of love triangles, overly dramatic situations, and contrived plot developments, then I guess this anime is right up your alley. For me, it’s a change-of-pace, I guess.

— I’ve never heard of a kappa sandwich. What is that?

— When this young couple arrives, this is where the eye contact thing comes up. Again, I’m supposed to make eye contact with everyone I speak to. It’d be rude not to, so eight seconds wouldn’t work. But maybe it’s different in Japan or something.

— During a lull in the morning, Mitsuyoshi brews his friends some coffee. Teresa trots out these chocolates that you can dip into coffee for a little added flavor. Kaoru acts all surprised, which makes no sense. Surely a guy who regularly visits an authentic Japanese coffee shop has heard of caffe mocha?

— Kaoru is obnoxious. He can never shut up. He’s one of those people who are uncomfortable with silence, so he feels the need to always fill the air with his inane chatter. Mitsuyoshi is uncommonly tolerant, which is probably why they can be friends at all.

— On the other hand, I used to think Alec was cool, but after the Naruto nonsense she pulled last week, no thanks.

— Like Nyanko Big, Mitsuyoshi is not supposed to be a enamored with girls. And like his pet cat, he’s also not supposed to like sweet stuff. But of course, cats can’t like chocolate… it’s bad for them. I’m also told that cats can’t taste sweetness. My cat loves ice cream, but only for the cream.

— Much to Nyanko Big’s surprise, Mitsuyoshi takes a sip of Teresa’s cup of coffee and enjoys the flavor. This means Nyanko Big is going to fall in love, huh? That’s how these things work.

— In any case, I am surprised at his audacity to be normal. As an anime character, he’s supposed to squirm and blush over the fact that he just drank from a girl’s cup. That’s an i-i-indirect kissu! But no, he doesn’t bat an eyelash.

— Teresa, on the other hand, is not such a cool cucumber. She doesn’t freak out or anything, but she does blush as she stares at her cup of coffee. Because Mitsuyoshi had no reaction at all, I didn’t even think of the “indirect kissu” nonsense at first, so I was like, “Why am I watching her drink her coffee in slow motion? Why is she blushing?” Only when I look over my screenshots of the episode now that I finally realize what was going on with the girl. Ahh, the most dangerous “indirect kissu” is subtle.

— Anyways, in the second half of the episode, everyone gathers at a nearby park to snap some pictures. But in practice, all we get are some more flashbacks. Mitsuyoshi apparently saved Kaoru from a kappa, but not really. The kid isn’t even in the deep end of the pond. On the other hand, a chibi Teresa had jumped into moat just to get her crown made of flowers back, so Alec actually did have to save her. Okay. That’s cool to know, I guess?

— Anyways, that far cuter cat from the very beginning of the series makes its reappearance. Its name is supposedly Cherry, and Nyanko Big falls in love at first sight. He quickly embarrasses himself by trying to stupidly leap across the pond.

— Oh, he’s fine. You don’t have to worry, because most cats can swim despite their aversion to water. Hell, most cats don’t even mind water. Needless to say, Cherry is thoroughly unimpressed.

— See? Look at that fat log. He slips off the branch at one point, so Teresa steps in to catch him. Cats are supposed to land on their feet, but I guess you could argue that Nyanko Big could’ve been too tired to do so.

— Then to ramp up the romance just a tiny bit, the momentum of the fat cat sends her stumbling backwards, but Mitsuyoshi is right there to “catch” her. Doki doki.

— Nyanko Big can’t help but tell us that “[l]ove goes hand in hand with pain.” Sure, you have to put yourself out there for love. Mitsuyoshi seems like he’s always been a stoic kid, but maybe he’s been extra guarded ever since his parents died. But on the other hand, this feels a little too dramatic for a show like Tada-kun wa Koi wo Shinai. It’s so carefree that it’s hard to imagine the main character being saddled with any sort of real baggage.

— In any case, Teresa finds herself lost in thought as she stares at a picture of all of her newfound friends. No doubt, she’s focusing on Mitsuyoshi out of everyone in the group. Eight seconds, huh? Kids fall in love so fast these days.