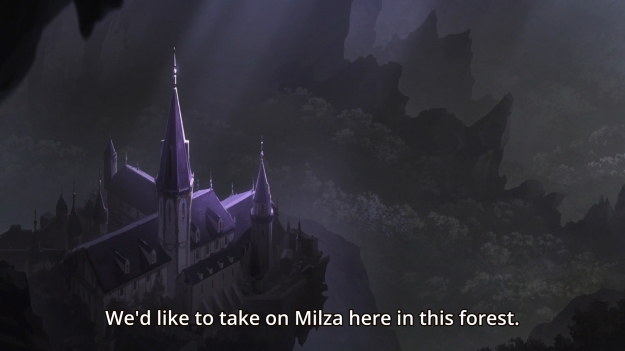 Guerrilla warfare isn’t just hiding in the trees, utilizing hit-and-run tactics, and ambushing them from all angles. It’s also about inspiring the people. It’s the perfect David vs Goliath scenario. Not only do you crush your enemy’s spirits, you also rally the people to your cause. Over and over again, Milza is warned that Theo has a way with the masses, but as always, the villain’s hubris is his downfall.

— But before any of that can get started, we have to deal with Jana, the Black Witch. Siluca tries to grill the woman for information, especially regarding the Great Hall Tragedy. Unfortunately, Jana just snaps and starts laughing like a maniac.

— Plus, the Mage Academy is all too eager to pin all the blame on Jana. Not only do they have a new court rank for Theo (and some extra video game-like goodies to go along with his successful liberation of Sistina), these schmucks want to burn the Black Witch at the stake without a proper investigation. There’s something fishy about this, and Siluca agrees. Unfortunately, she has pressing matters to deal with (like Theo’s return to Altirk), so it wouldn’t really make sense to raise a stink about Jana here and now.

— Also, this animation continues to bring shame to A-1 Pictures’ name.

— I mean, just look at that fire! For Christ’s sakes, it looks like a fake stage prop!

— Anyways, Jana refuses to go down quietly even though she’s seconds away from immolation. All of a sudden, she summons a Demon Lord right there and then.

— I think you guys should maybe run. 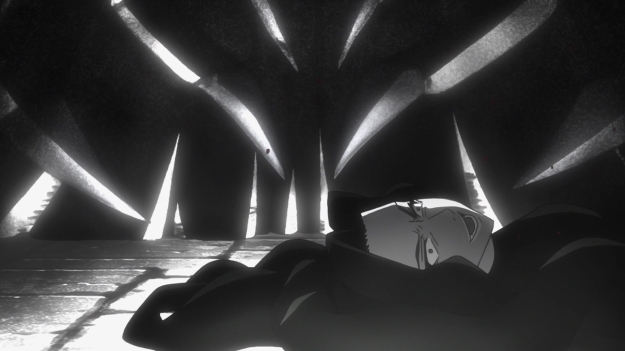 — Oddly enough, the Demon Lord simply executes Jana with its sword, then vanishes right before everyone’s eyes. Um, okay then. I doubt that’s the last we’ll see of her, but still, I didn’t quite expect this to happen. The story simply reminds us that the whole “ULLLLLTIMATE CHAOOOOOS” dealio is still a threat that our heroes will eventually need to deal with, but not now. Maybe at the end of the series or something. But that’ll be weird, won’t it? We’ll have watched two whole seasons of war and politics only for some supernatural threat from the netherworld to suddenly become a serious problem. Ah well.

— Elsewhere, Milza’s assigned mage warns him about Theo’s exploits in Sistina, but the Dartanian Prince doesn’t care. After all, he’s bested Theo once before in one-on-one combat, and our hero didn’t put up much of a fight.

— There are, however, dismaying news of a direct attack on one of Milza’s fortresses. When the guy arrives to inspect the damage, he asks, “…why aren’t my citizens obeying us?” Uh… are you serious? You’re a foreign invader who just aided in the death of their beloved lord. What did you expect?

— Milza then continues, “I’m only exercising my legitimate right to rule over them, according to the court rank system.” Yeah, I’ll try using that the next time I conquer another nation.

— I thought Milza’s mage might be smart, but not really. He suggests that the prince retaliate against the people: “…that blame should rest on those people who are using them as a front to revolt.” Ooh yeah, that’ll definitely make them obey you. It’s hilarious, though. These chucklefucks can easily invade other countries, but they’re complete dimwits when it comes to actually running one. They can only hold power through fear, so they’re always in danger of being usurped by the next great warrior. But instead of actually self-reflecting on their shortcomings, they instead worship at the feet of strength and power. If someone overthrows me, that just means that they’re stronger! And if they’re stronger, that just means that they’re most just! What a sad, miserable existence. 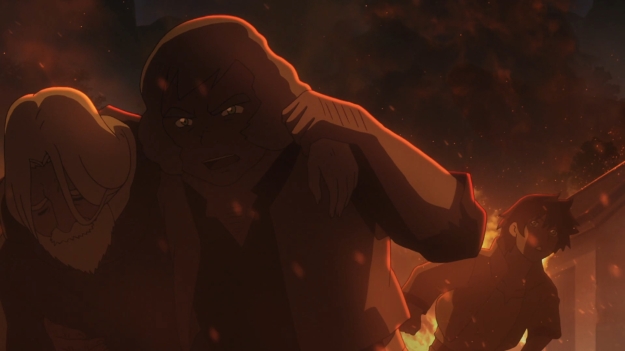 — So Milza listens to his mage and directly attacks the White Witch’s village. Refugees flee into the forest and hide out in Theo’s castle, a.k.a. Dimitrie’s castle. Say, what is that silly vampire up to these days?

— Luckily for the White Witch and the werewolves, Milza doesn’t continue pursuing them. Instead, he’s busy butchering someone I don’t even recognize. Oh well.

— Milza then adds, “From now on, I will mow down anyone who stands in my way.” Um… you weren’t already doing that? Did I miss the warm and cuddly Milza phase?

— Upon Theo’s return, he gets a big bro hug from Lassic. I still don’t understand why Lassic has such a hard-on for our hero, but at the same time, I don’t really understand why Siluca loves him either. That’s our punishment for rushing this adaptation. But honestly, would anyone really minded having this adaptation stretch out over multiple seasons? Fleshing out all of these characters and their relationships to Theo can only be a good thing, right? Since so much has been cut out from this adaptation, I just can’t see how a longer, more concerted effort could’ve hurt. Other series will suffer, because they’d end up being bogged down by filler episodes or whatnot. On the other hand, Record of Grancrest War is so devoid of proper character development that I can’t see how 50 or even 100 episodes can honestly be seen as a detriment.

— Oh, uh, this girl is still alive. We saw drink poison right in front of Marrine, but I guess it was all just a ruse.

— Moreno warns Siluca that the other Altirk Lords will blame Theo for leaving. Apparently, a bunch of them went the way of Sir Neyman and died offscreen while our hero was busy liberating his own people. Oh well!

— Theo is a natural politician, though. As soon as the conference begins, he immediately calls for a moment of silence for the fallen lords. Ooh, that’s good. Act like you care.

— But the problem is that we know he does. Theo is not some sort of Machiavellian mastermind. He’s not even Lelouch. He’s legitimately a vanilla, goody-two-shoes. Is that bad? Not necessarily. It’s just that he can be a bit two-dimensional at times. His bold love for Siluca is the only hint of spice to his personality. Otherwise, he’s about as bland as your typical A-1 Pictures protagonist. We should thank our lucky stars he doesn’t have generic black hair (it is instead generic green hair).

— One of the lords in attendance starts passive aggressively griping about Theo’s recent absence, but our hero also has a few defenders in the crowd. I wish I could remember their names, though. At the end of the day, however, they’d still prefer to follow Lassic into battle. Sistina’s liberation has earned our hero a new rank, but he still needs to prove himself in battle.

— Theo plays to their hearts by agreeing that leadership should not be changed for now… but he still volunteers to lead the charge against Milza. In other words, he’s the leader. It’s a clever ploy, but he’s also putting his money where his mouth is. They’ll need to rally most if not all of the free lords’ armies in order to take back Castle Unicorn. If they lose here, they may as well just surrender everything else. With Theo in charge of such an invasion, he’s their leader in all but name. At the same time, he’ll still have to succeed. There’s no hiding from Milza at this point.

— Elsewhere, Marrine is also having a little pow-wow with her precious conference of, like, three people. She’s even baked madeleines for them! One can hardly imagine that this is the same girl who gassed an entire castle and fucked a dude just for his cooperation. She also seems either oblivious or indifferent to the bad blood between her own allies.

— Apparently, the slaves in Starck are in revolt, but I can barely remember where Starck is. Is that the nation that got gassed by Marrine? Ah well. Marrine tells the red-headed girl that she won’t tell her lords how to manage their territories, which just makes her even more unlikable. She’s on this great big conquest to unite all of the lands under her name, but she doesn’t give two shits about the people. But that’s not even the funny part. The funny part is when Milza starts lecturing the red-head: “Suppressing them by force will only breed ill will.” Ahahahahaha, this coming from the guy who just retaliated against a peaceful village!

— Anyways, Marrine is also concerned about Theo. She’s seen firsthand how he can rally troops to his cause! But blah blah blah, Milza don’t care. That’s when Aubeste shows up with perfect timing to deliver the bad news. Theo intends to take back the Forest of Eternal Darkness, and Milza is not pleased. Oh man, that poor madeleine! Now you’ve got sugar and grease all over your hand, dude. How are you gonna grip a sword in battle like that?

— Basically, Milza’s troops outnumbers Theo’s troops 5 to 1 (I can math!), but our hero will make like the Vietcong and force the enemy to fight them within the Forest of Eternal Darkness.

— Not only that, Theo has people to fan of the flames of rebellion. To nobody’s surprise, there’s an anti-Milza faction lurking about. Not only that, there’s that slave revolt in Starck. So who should step up and take charge here? Why, it’s Juzel Rossini! Bearing no ill will towards Theo at all, he has followed his brothers’ murderer to Altirk! Amazing! Theo has such a way with people!

— Meanwhile, Milza’s mage correctly points out that they’re walking into a death trap. We can’t do it, man! We can’t face the Charlies in the treeline! But does Milza listen? Of course not. If anything, he feels insulted anyone would even doubt him. Still, I don’t expect him to lose his life in the upcoming battle. Instead, he’s going to lose a lot of troops and get pushed back to Castle Unicorn. Just earlier in the episode, Marrine had warned him not to hesitate to request for backup against Theo, but I suspect he’ll realize this too late. Oh well, the sooner we deal with him, the better. ‘Cause Marrine needs to be punished shortly afterwards.