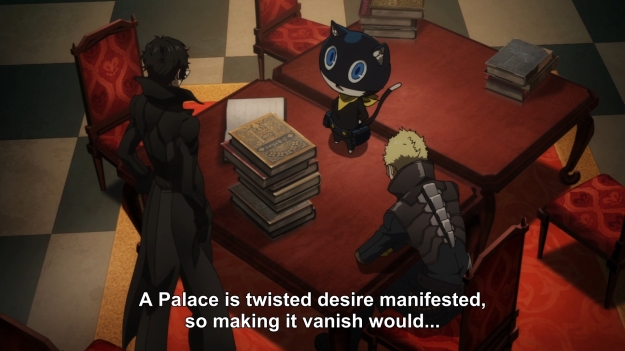 I just finished watching a pretty damn good episode, so let’s see how Persona 5 The Animation is going to bring me back down to Earth.

— Those 3D items on Igor’s desk look embarrassing. I now wish someone else had gotten their hands on this adaptation. Considering how the game’s anime cutscenes were done by Production I.G, maybe this should’ve just gone to them instead.

— Also, why is this explanation coming from the Velvet Room inhabitants? This is what Morgana is for.

— Ryuji is drooling over the thought of Ann in a bikini, but she’s got no booty. Unfortunately, none of the girls do. JRPG devs have a lot to learn from PlatinumGames.

— Hm, what did Akechi notice when he saw Ren and Ryuji? Could he have already realized who Ren was this early into the story?

— We get to see how Morgana was stalking the guys, but I’m still salty about how last week’s episode ended. What’s supposed to happen is for them to leave the place without offering to help the cat out with Mementos (something that will be introduced later in the story). He would then get angry with them for ditching him. See, Morgana doesn’t really care about Kamoshida or the guys’ school. Unlike the friendly and lonely Teddie, the cat is initially only in this for himself, and he sees Ren as a useful pawn. I like this early characterization, because I always felt turned off by how much Teddie fawned over Yu (everyone in Persona 4 worshiped him, to be honest). He’ll eventually grows into an indispensable member of the team, but that whole dynamic has been downplayed a lot by leaving out his early minor conflict with the boys.

— I don’t remember the boys questioning Shiho directly, but I might’ve forgotten this part.

— We finally get to see that all-important scene where Ren talks to Ann and understands what she’s going through. Basically, the rumors about her and Kamoshida aren’t true. Unfortunately, I think Ann’s delivery was stronger in the game. We’re also missing Ren’s attempt to cheer her up afterwards.

— Still, I’ve always liked this scene. The first time I saw it, I thought it hit the right emotional note, and it really endeared me to Ann as well. Morgana tells the boys that they can solve their Kamoshida problem by stealing his treasure, but the cat can’t assure them that Kamoshida won’t die as a result. Sure, Ren and Ryuji want to stop Kamoshida, but they don’t exactly want murder on their hands. Who would? Ren’s talk with Ann, however, pushes him one step closer to accepting the fact that even if Kamoshida does end up dying, it’d still be preferable to his continued abuse and predation. Of course, the tragic event is what seals the deal, but Ann’s breakdown is an important step towards that.

— It’s unfortunate that Ann’s importance kinda faded over time after this arc. Yukari always remained central to Persona 3’s story even if Aigis kinda came out of nowhere and started usurping her role as Makoto’s love interest. On the other hand, there wasn’t really a main girl in Persona 4 until the dreaded Marie showed up.

— Just as an aside, I really hated Marie’s stupid poems.

— It’s supposed to be the history teacher leading the class during Shiho’s suicide attempt, but the adaptation probably changed it to Sadayo, because it didn’t want to show us a new face without actually introducing us to him. I don’t think it would’ve hurt, but whatever.

— That fall really bruised her face…

— The adaptation adds a small moment where Ren convinces Ann to go with Shiho. Hm.

— In the game, this is where Kamoshida’s true nature finally comes out in full force. In the anime, however, we’ve already been warned ahead of time that he’s evil. It takes away from the impact of the revelation.

— Mishima is sad and pathetic, but I never really minded him too much. I mean, he’s supposed to be annoying. All of the Moon arcanas are. From P3 to P5, they’re all supposed to be extremely flawed individuals with Nozomi truly taking the cake. Still, I really liked the fact that you had to turn Ai down if you truly wanted to pursue a romantic relationship with her.

— It’s a good thing I didn’t mind Mishima either, since his social link rewards you with bonus exp after battle. I couldn’t help but cringe at the fact that a lot of streamers could’ve shorten the amount of grinding that they needed to do if they had just befriended Mishima.

— Hm, we completely skip the part where Ann gets sucked into the other world and freaks out at the sight of Ren and Ryuji in costume. It’s one of the story’s many humorous moments.

— All of a sudden, a siren goes off, so we’ll get to Ann real soon. Still, why would a castle have a siren?

— …no comment. Actually, no, I’ll say this: it’s just funny at this point. It’s hilarious.

— Still, I always thought it was badass for her to grab the sword and cut up the fake Ann. Instead of being ashamed of her sexual appeal, she’s taking control of it. This, however, looks like bad female anatomy in action.

— The adaptation downplays a major aspect of Kamoshida’s evil, though. When the guys enter this room, they’re supposed to see a bunch of girls writhing around in sexual pleasure. Basically, that’s how he sees the female students. Maybe the anime just doesn’t want to deal with it, but this part is cut out completely. Also, the adaptation seems to lean heavily towards the idea that all he did was beat Shiho up.

— I like Ann’s design, but those pink gloves are tragic.

— I’m amused how Pixie keeps showing up in these fights. She should’ve been recruited by now.

— C’mon, why would you leave out the characters’ unique backgrounds? For instance, check Ann’s out:

They show off so much personality! Ann’s background still makes an appearance on her phone, but still…

— I wish my cat was smart enough to sit still in a bag.

— Oh, they’re finally going to have the main character use a gun? Took them long enough.

— At least they didn’t leave out Ryuji’s amateurish art on the calling card. In any case, it looks like we’ll finish up Kamoshida in just four episodes. I guess that makes sense considering how many palaces that we still have, but the story is so abridged. Our hero still hasn’t visited Tae. He also hasn’t been to the weapons shop either. It has one of the best tracks in the entire game! Needless to say, I’m really disappointed by this adaptation. I’m going to stick it out simply because it’s Persona 5, but yeah…