You didn’t think we were done with ugly CGI, did you?

— After nearly freezing to death at the end of last week’s episode, Sugimoto eventually returns to Asirpa’s makeshift hut to find a nice stew of rabbit chitatap. This time, the dish even comes with mushrooms and leeks. Still, there are many ways to cook a rabbit. On the other hand, squirrels have so little meat, so it makes sense to turn their flesh into meatballs. And now, I’m kinda hungry for rabbit curry…

— The guy thinks miso would really improve the dish, but Asirpa has never heard of the fermented soy bean product. When he whips a container out of his belongings — he always carries miso with him? — she recoils in disgust because she thinks it’s poop. I’m not 100% sure if she’s serious or not. I don’t care for miso, but it’s nothing like poop to me.

— In the morning, the girl suggests that they trap and kill a bear dozing in its den. You can barricade the entrance and stab the bear with poison arrows when it pokes its head out, or you can take the hardcore option. According to the Ainu, “bears won’t kill someone who enters their den.” Uh-huh. I’m not going to test that theory, and it looks like Sugimoto doesn’t want to either.

— Unfortunately, our duo’s casual jaunt through the woods is soon interrupted by the 7th division. With their pursuers on skis, Sugimoto realizes that he and the girl can’t get away on foot alone. As a result, he suggests that they split up. If the girl gets caught, he just wants her to surrender and play dumb. He’s confident they wouldn’t hurt a kid. Hm.

— She also tells him not to fight back, but he’s cocky. After all, he’s the Immortal Sugimoto.

— A soldier eventually tracks Asirpa down, so she hides the copies of the prisoners’ tattoos in the tree branches. A rogue squirrel, however, wants revenge for its fallen allies. For some reason, I find this highly amusing.

— But again, as soon as the girl finds herself in a sticky situation, her white wolf comes out of nowhere to save her hide. Once is fine, but how many more times is this going to happen? It’s a little too convenient, isn’t it?

— Meanwhile, Sugimoto also tries to play dumb when the other three soldiers catch up to him. Unfortunately, his face is a little too recognizable. Still, the guy spies a nearby bear den, so he decides to test out that Ainu theory. 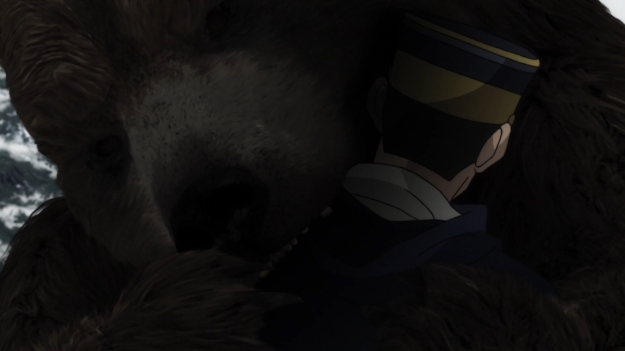 — We cut back to Asirpa, and she stops the wolf just short of killing the soldier. After all, this will curse the wolf. She had said something in a previous episode about how a bear would become a wenkamuy if it kills people, so it stands to reason that the same thing could happen to the wolf.

— Still, it seems like a mistake to leave these soldiers alive. This can potentially come back to bite her and Sugimoto in the ass.

— Let’s go back to the bear. Aw fuck… the soldiers managed to kill the bear.

— Aw fuck, the bear tore that guy’s face off.

— All of a sudden, Sugimoto just casually emerges from the bear den with a bear cub in his arms! What?

— We then cut back to Asirpa once more to see her petting a very silly-looking Retar. Man… I’m not saying that the show is bad. It’s just too goofy for my tastes. 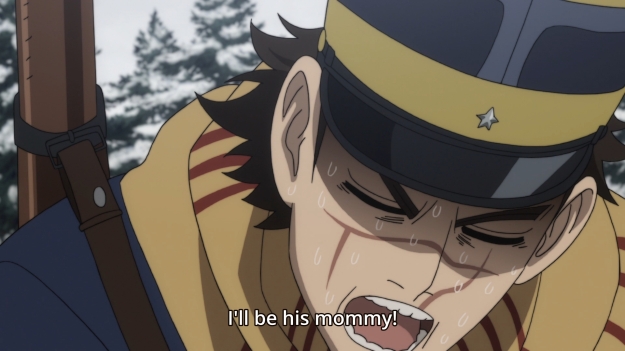 — Meanwhile, Sugimoto foolishly wants to care for the bear cub. He even thinks he can hide it from Asirpa in his jacket. Dude, you can’t just raise a bear! It’s a wild animal!

— Asirpa assures the guy that she won’t eat the baby bear. Instead, they can bring it back to her village where it’ll be raised… but not for long, though. I’ve heard about this. The Ainu people have something called an Iomante where they’ll raise a bear for two years then kill it. Yeah, yeah, it’s called a sacrifice, but to me, it’s the same thing. We slaughter animals for food in practically every culture.

— Sure enough, the two of them pay Asirpa’s village a visit. Look at all those bear skulls. The villagers are not scared of Sugimoto. But we then ominously cut to the soldier that had attacked Asirpa. She assumed that he wouldn’t be able to move after Retar had broken his legs, but not only is that not going to be a problem, he now has this unquenchable desire to hunt and kill Retar. Man, that wolf better not die.

— Anyways, Asirpa’s grandmother starts going on and on about how the poor girl can’t get married because she’s been raised too much like a boy. In fact, the old woman claims she can’t die until the girl is married off. Since she’s already at that age, the grandmother asks Sugimoto to take Asirpa as his wife. Oy vey.

— Luckily, the old woman can’t speak any Japanese, and Sugimoto doesn’t understand a lick of the Ainu language. It’s kinda weird that Asirpa’s grandmother is so worried about the girl when she can hunt and survive on her own in the wilderness. Then again, traditions are hard to shake off. I really don’t want Sugimoto and Asirpa to be a thing, though. They can be a team, but c’mon, let’s not give them a romantic relationship. After all, she’s an Ainu girl for a new era, right?

— We learn more fun Ainu facts like how this kid is named after poop. Why? ‘Cause naming kids after gross stuff will ward off diseases or something. Then when the kids grow up and form a personality, they get their actual names. See? Fun facts. Asirpa’s first name was fun too!

— And now, Asirpa tells Sugimoto the bad news. No, they do not raise bears here to send them back into the mountains. Yes, they will eventually kill his precious baby bear. It’s just their way of life.

— Elsewhere, we see Lieutenant Tsurumi lead a bunch of men in a search of the four soldiers from earlier. Captain Wada suddenly shows up and tries to lecture Tsurumi, but the latter is so unhinged that he just bites the man’s finger off. He then commands the rest of the soldiers to execute their captain. Welp.

— We then see another prisoner in the middle of fucking a woman (probably a prostitute in a brothel) when the so-called former Demon Vice Commander of the Shinsengumi bursts into a room.

— What the hell is wrong with that guy’s forehead?

— In any case, these two men form a shaky alliance for now since they both know they’ll eventually have to cross paths with the 7th Division in pursuit of the Ainu gold.

— But that about does it for our third episode. It was more fun to watch than last week’s episode, but I still don’t know how to feel about the humor. Again, it’s not really to my taste. I always find it weird to go from extreme violence to laughter. Also, what are the chances that Sugimoto tries to leave Asirpa behind? Wouldn’t that be such a cliche thing for him to do? I just get the feeling that he won’t want to endanger the girl any further, so he’ll try to leave the village without her.