Wow, Joe’s going to go into his first official match ever without any Gear. The kid is right to be concerned; even though Joe has no intention of losing, this is almost suicidal. But hey, he could always market himself as an old school hipster who insists on boxing the way it used to be done. Onto the rest of the notes.

— How do you ever manage to climb if no one wants to fight you? Personally, I’ve never gotten into boxing or any of the fighting sports. The idea that people could just duck fights is kinda lame.

— As if Joe didn’t already have a big enough handicap, he’s going forward with this “Gearless” gimmick just to drum up any sort of hype and excitement.

— Samejima is pissed off and understandably suspicious of Joe’s motives. Fighting “Gearless” doesn’t seem safe (nor would it be much fun for the spectators if one side is so overmatched), but I guess the officials never even thought that anyone would be foolhardy enough to pull this sort of stunt.

— Then again, sparks are literally shooting out of Shark Samejima’s Gear. That doesn’t seem safe either. Maybe the officials in charge of the rule book just don’t really give a shit. 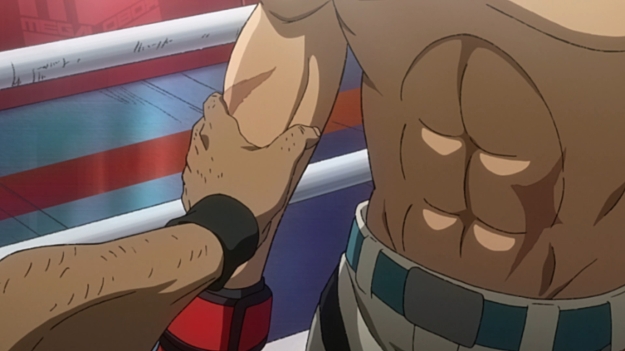 — I’m glad to see Joe trembling a bit right before the match starts. Gansaku has to grip his arm just to keep it still.  Fear and excitement are just two sides of the same coin. He put on a brave face when he initially climbed into the ring, but now reality is starting to settle in: “I’m really going to fight without a Gear. Am I stupid?” I was worried that Joe’s characterization might lack nuance — that he might be too brave and strong. But this is good. Seeing a little fear in him is good. It shows that he’s stupidly courageous for pulling this stunt, but at the end of the day, he’s still human.

— Gansaku offers Joe one last chance to back out, which the guy obviously does not accept. Nevertheless, would the old man really have been okay with this? After all, they’re both up the shit creek if they don’t at least make it into Megalonia.

— Plus, he’s not that disadvantaged. Again, the Gear is only strapped to your upper body. Your footwork is all yours. Joe just needs to channel his inner Floyd Mayweather and become annoyingly defensive in the ring. None of the viewers will have a good time, but it’s not like he should give two shits about them.

— Joe takes advantage of his speed early, but he can’t even block a blow without getting the wind knocked out of him. He can’t afford to take any hits period.

— Then Megalo Box does that thing that you can find in every boxing-related fiction out there: our hero is unable to get up as the countdown continues ticking. Oh no, is he going to stay down and lose?! Of course not. Joe gets up with just one second left on the clock. If he’s going to lose like that, it’s certainly not going to happen now.

— Gansaku tries to make sure Joe understands the gameplan, but our fighter is not quite all there upstairs. I’ve never experienced a concussion, so I have no clue what it must feel like. Still, blurry vision is one of the symptoms. Continuing this fight is foolhardy, but then again, he won’t make it into Megalonia if he doesn’t win here. Damned if you do, damned if you don’t. His coach can’t pull him out either, ’cause again, they’d both be screwed.

— Even the nerves are getting the best of Gansaku and Sachio as they trip over themselves.

— Apparently, Samejima will be banned from the sport if he fouls out one more time. Yeesh, how many times do you have to fuck up for them to throw a ban at you? 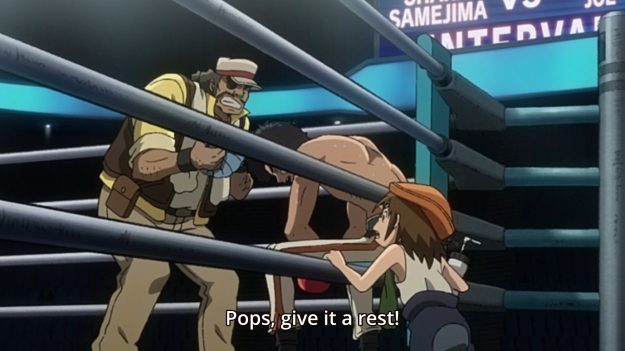 — Sachio pleads with Gansaku that something is wrong with Joe. After all, he is still young and innocent enough to still care about someone’s health. Plus, he wouldn’t know anything about the guy’s debts. Luckily, round two ends before Joe has to eat anymore punishment.

— Joe: “And if he can’t hit me, I won’t lose. No matter how many rounds we fight.” Are you sure about that? Maybe Megalo boxing is different from the boxing I know. Otherwise, even if he runs the clock out, the judges will grade their performance in the ring. So far, Samejima must have the advantage since he nearly knocked Joe out.

— Gansaku isn’t taking into account that Joe’s nerves are fried. On the other hand, Joe is too stubborn and thinks he can do this by himself. A child ends up having to lecture both men. How embarrassing.

— Gansaku: “Listen to me: fear is a human instinct.” You’re goddamn right. It’s alright to be scared.

— So after swallowing their pride, the two men agree that they need to work together to beat Samejima. Classic “minna, ganbatte~” scenario from anime.

— From here on out, the match decisively turns in Joe’s favor. When Gansaku spots an opening, he yells at Joe when to go for the knockout punch. And with that, our hero is now officially 1-0 in his professional career.

— We gotta cut to Yuri hearing about this “Gearless Joe” on the news, right? C’mon, you can’t end this episode without showing us that.

— So how much money did they get from this one fight? Can these three even have a celebratory feast afterwards?

— And just like that, Joe’s second and third matches come and go as we find ourselves in the middle of a montage. We also get to briefly see how Sachio contributes to the team. He’s basically using his gadgets to help scout out future opponents. Well, I guess there are more pertinent stories to tell in later episodes, so we can’t get too caught up in these low-ranked fights. Still, it would’ve been nice to see them anyways. It would’ve also been nice to see the slow-developing teamwork between Joe, Gansaku and Sachio.

— How cute: the kids are lending a hand by drumming up hype for Joe.

— Well, we got a Yukiko reaction shot. I guess that works too. Still would’ve liked to have seen Yuri, though.

— Joe’s next opponent is ranked 17th. The plan was for our protagonist to start using a Gear around this time, but people don’t want to see “Gearless Joe” suddenly go against what he’s known for. Will he be pressured into doing this fight without one as well?

— The 17th ranked boxer is someone whom Gansaku used to coach. Well, I guess it’s personal now.

3 thoughts on “MEGALOBOX Ep. 4: Hang your pride up”