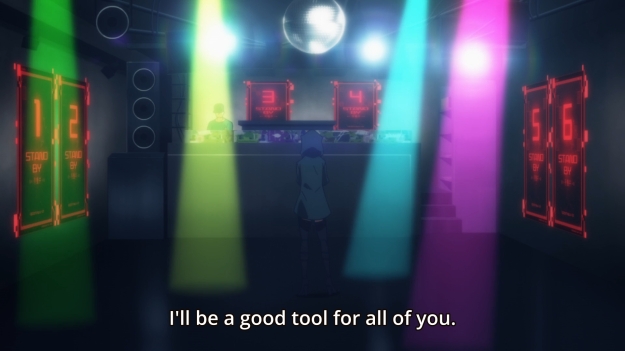 The bad news is that there won’t be a new Darling in the FranXX episode this week. But the good news is that Beatless is back! Hey, where are you guys going?

— Wait, we’re here? What happened at that party? How did that party end? Why did Erica call them all there just to give one tiny speech?

— After the OP, we see Kouka negotiating to be owned by the antibody network, a.k.a. the hIE-haters. She feels as though they’re the only ones who would give her the long leash that she desires. Still, the idea is just plain paradoxical in the first place. Without an owner, these hIEs are unable to do anything. As a result, they need an owner just to be free at all. Sure, they were designed to be this way, but that doesn’t make it sound any less stupid.

— Apparently, Memeframe has framed Kouka (no pun intended) for the airport attack from a few weeks back.

— A long, dry conversation between Erica and Saturnus (I know her new name is Marriage, but screw that) follows, but we do learn an interesting thing about Kouka: she’s designed to fight, but she can’t beat society by herself. Erica argues that the hIE had chosen the wrong owner, but I mean, there’s really no one out there who can help her fight an entire army. She’s essentially born to die… again, this is assuming that the hIE can’t resist her urge to battle. But I mean… if these hIEs are so smart, can’t they conceivably “fix” their own programming? Or is that not remotely possible? Again, it’s one of those paradoxical ideas in this story: AI has supposedly surpassed human intelligence, but they can’t even alter the course of their own actions. What is intelligence without freedom? 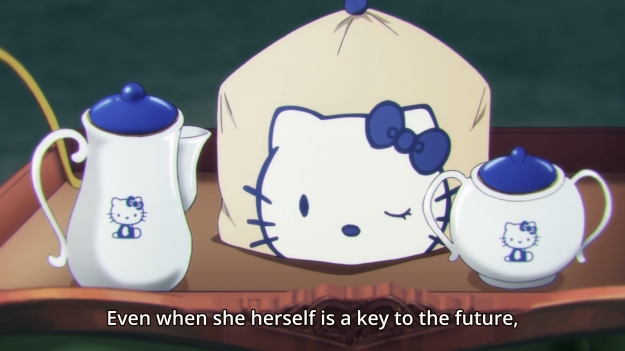 — What’s with all the “Hello Kitty” image placement?

— Nevertheless, Erica reasons that a successful alliance with Lacia’s owner would ensure Kouka’s survival. Really? Why do so many people think so highly of Arato? The idea here is that Arato desires a fair and equal society between humans and hIEs. In his future, you wouldn’t treat Lacia any differently than any human. Still, that’s just his desire. Simply desiring something doesn’t make it so. Why does everyone think that he even has the capability to pull off this grand dream of his? What makes this kid so special? He’s not a genius. He’s not superstrong. All he has going for him is his compassion for hIEs, but he’s not the only one. His own damn father is trying to build a society in which hIEs can coexist with humans.

— The perspective here is pretty bad.

— By the way, there’s gonna be yet another recap episode after this one. First, that’s nuts. Have you ever seen three goddamn recap episodes for just thirteen actual episodes? Second, a recap episode implies that this one will wrap up a major arc. Considering how Memeframe now wants Kouka destroyed at all costs, well… let’s just hope nothing happens to our redheaded hIE. I mean, I don’t particularly care for her, but I like her a whole lot more than Snowdrop, Saturnus, and Methode.

— Elsewhere, Lacia is continuing her modeling career. Yep. You’ll notice that the fellow in front of her is not Arato. Luckily for Lacia, her owner is not the jealous type. In fact, he’s quite self-assured.

— The human model is jealous of all the attention that Lacia is getting. Meanwhile, Arato doesn’t like the fact that Lacia has been reduced to nothing more than an image. But uh, that’s kinda what advertising is. 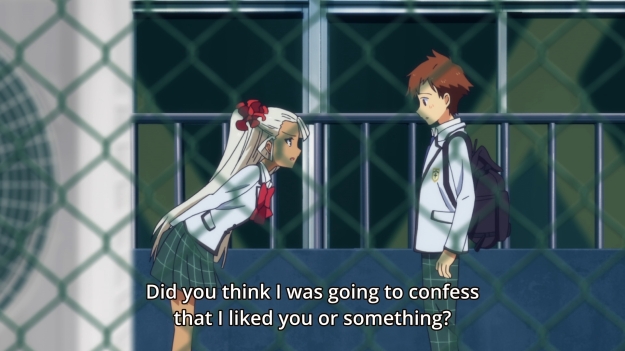 — The following day, Arato finally gets to go back to school. If you’ve forgotten, he was suspended for the airport incident. Anyways, he can barely even get settled in before Erica suddenly wishes to talk to him privately.

— Basically, Erica wants Arato to come forward and make the fight for his future public. What fight, you ask? Well, what do you think Lacia is modeling for? This whole “Boy Meets Girl” modeling campaign is designed so that humans will look favorably upon a coexistence with hIEs. Erica even suggests that this was Lacia’s plan all along. Yes, Yuka signed her up for the gig, but Lacia could’ve stopped it at any point in time.

— Arato starts to worry about his love for Lacia. She never did tell him that she loved him back. Could he just be a tool in her grandiose plan to ensure the survival of all hIEs? After all, “Boy Meets Girl” would never work if Arato doesn’t genuinely love Lacia. You need that authenticity. Otherwise, it’s just another soulless marketing campaign. Having said that, he has to keep in mind that he barely knows Erica. He has no reason to trust the girl over Lacia. Sure, he can’t be completely sure that Lacia cares for him, but he’s gotta be way more confident in her than he is about anyone else! Nevertheless, the kid is clearly rattled.

— Elsewhere, we see Kengo get all pissy with a poor hIE. He argues that there’s no need to smile back at them, since they’re just soulless automatons. Sure, you could argue that. But if you argue that, you must also believe that there’s no reason to get mad at them either.

— He thinks back to when he and Arato used to be kids… well, more than they are now. Let’s just say that our protagonist has always been a little screwy in the head. 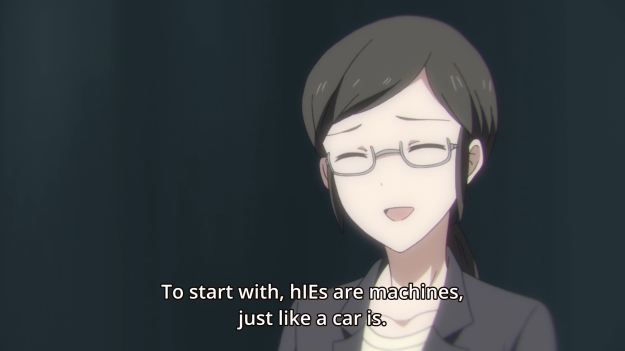 — Everyone else argues that hIEs don’t have feelings. Instead, they’re just imitating us… huh. You know how when kids hurt themselves, people will tell their parents not to freak out? ‘Cause if you freak out, then your kid will freak out as well. But if you stay calm, your kid will also stay calm. Kids tend to imitate their parents. In fact, that’s how they learn to conduct themselves. Later in life, they start imitating other sources like their teachers, their friends, so on and so forth. At some point, however, the imitation stops being an imitation. At some point, we point to a person’s emotion and say that it is a genuine emotion of theirs. But when does that distinction occur? Can we ever really know such a thing?

Let’s say an hIE drops its ice cream cone, so it cries. In Beatless’s universe, they would call this act of crying, a emotional display of sadness, nothing more than an imitation. But is the hIE imitating human behavior every single time it cries? Or does it only have to imitate a human once, then afterwards, it simply knows what to do? Would that make a difference? Is causality to blame? What I mean is that you can presumably trace all hIE “emotions” back to some original act of imitation, but the same can’t be done with humans. There’s no such record, and furthermore, our memories aren’t that good. But just because the chain of causality doesn’t exist for us doesn’t mean that we’re any less of an imitation of the world around us. We are imitators too. At some point, however, everything gets fuzzy and we start claiming ownership of our emotions. Why can’t hIEs do the same?

— The teacher then asks, “You wouldn’t ever think about marrying a car, would you, Mr. Endo?” Well, about that…

— Arato responds, “But the hIE I saw at my dad’s company was super pretty.” Good lord, don’t tell me that he and Lacia are “childhood friends.” 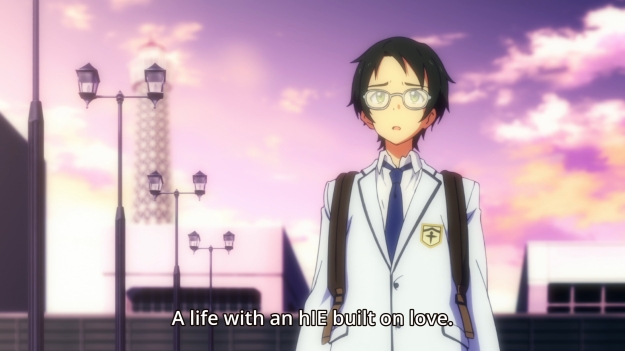 — Back in the present, Kengo maintains that his friend Arato is an idiot: “How can you marry something that can’t have feelings?” Yo, lots of people marry people without feelings.

— Anyways, we return to Arato, and he openly talks to Lacia about his encounter with Erica. At least these two have good communication.

— He clearly thinks that they can trust Erica, but luckily, Lacia is not so gullible. She warns him that Erica is incredibly deceptive and shouldn’t be trusted. The guy can’t help but admit that his hIE is right. But if Arato is this easy to manipulate, then he must naturally wonder if Lacia has been controlling him from the very start. Of course, this has been Ryo’s argument all along. Still, it’s not as if Lacia’s goal is a bad one. What’s so bad about an equal coexistence with hIEs?

— Lacia finally turns to him and says, “Please design a future where we can be together.” And yet, she doesn’t say that she loves him. She merely trusts him. On the one hand, if she merely wants to manipulate him, then it should be no problem for her to lie and say that she loves him. In fact, she’d be foolish not to. Then again, trusting someone is so vague… she can simply trust him to do what she needs him to do.

— I still think, of course, that Lacia genuinely cares about Arato. It would be super cool if it turns out she’s just been manipulating him all along, but I can’t see an anime being this cynical. It’s rarely the case that a show would ever piss off its viewers, so I doubt Lacia would ever shit on Arato’s feelings.

— Just to wrap up some loose ends, Shiori learns that she’s no longer allowed to have anything to do with Memeframe or the Lacia-class hIEs. Welp. 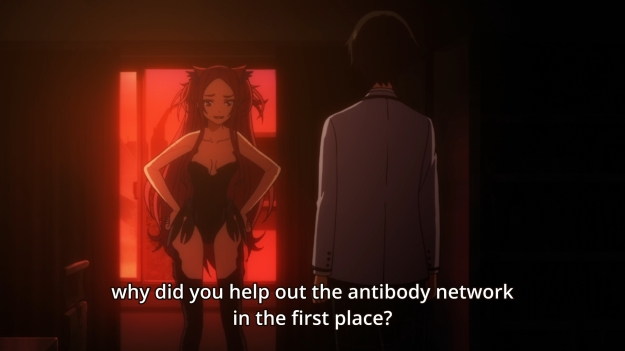 — Meanwhile, Kengo continues to rage out some more in his home: “Suddenly, there are these things everywhere that are indistinguishable from humans.” I mean, if you can’t tell them apart from humans, why not just call them humans?

— He then adds, “And because of [hIEs], people are treated like objects.” Uh… when? You mean when the fancy ones like Mikoto collect data from humans in order to govern them? I don’t think that counts…

— Eventually, the truth comes out: “I’m just left behind on the second floor of this failing restaurant. Endo and Kaidai just keep going on ahead without me!” To put it bluntly, Kengo is an impotent child, so he’s throwing a tantrum. He’s not as special as his friends, so he’d rather just take his ball and go home, i.e. “screw the future.” No wonder he joined the antibody network. They’re a bunch of whiny babies resistant to change. That’s pathetic, isn’t it? Unfortunately, this also appeals to Kouka, the least special of the Lacia-class hIEs. Compared to Lacia and Methode, she’s a meathead. As a result, she identifies with Kengo: “I’ll stop the world from changing…” ‘Cause that’s mature. Ah, you lovable scamps. Anyways, see you guys in two weeks for more Beatless fun!