Eh, this episode is moderately more interesting than what we’ve been getting the last two weeks, but I wish the story had done a better job of giving Sarina a more compelling set of motivations. Unfortunately, she’s a monster like most of the characters on this show. As a result, her showdown with Aya is so unsatisfying. In one corner, we have a wimp who is so goddamn nice to everyone that she ends up saving her would-be killer. Then in the other corner, we have a sociopath. I don’t want to root for either of them. Anyways…

— Looks like Tsuyuno has been pulling out her parents’ killer’s teeth one-by-one.

— Yeah, I definitely didn’t need to see this much detail.

— No matter how much of an evil dirtbag the guy might be, I can’t justify torturing another person. I just can’t. Tsuyuno comes off pretty terribly here. Of course, she’s a traumatized young child, blah blah blah… but this confirms it in my mind that there isn’t a single likable soul in this entire series. Yes, this includes Aya.

— I guess Sarina must have been following Aya, ’cause she’s now decided to make her presence known. The bully takes one look at the tortured serial killer and goes, “This is way worse than anything I ever did.” I always find it stupid when people try to compare and contrast heinous acts.

— Meanwhile, Nijimi is slowly making her way to Rina. I don’t think fingernails are supposed to be brittle. Also, I can’t take the acting here seriously whatsoever.

— Aya manages to pick her best friend up and dodge Sarina’s attack, so the yo-yo ends up cutting the serial killer in half instead. Whoops. 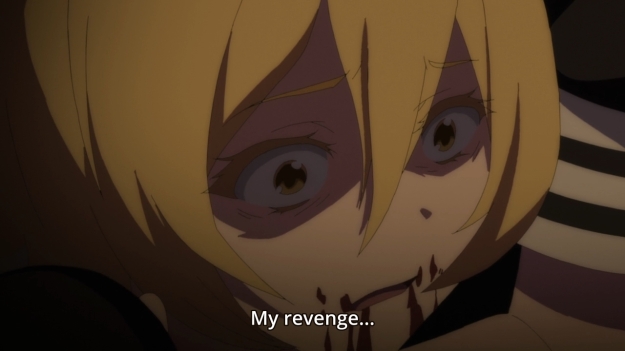 — Tsuyuno is literally devastated that she can no longer continue torturing someone. Oh no.

— It’s hard to give a shit about either side, because one side is so incredibly dumb: “You’re just an idiot pretending to be a victim, trying to play the tragic heroine.” What a hot take from Sarina. I mean, I don’t really care for the good girls either, but god, Sarina is so dumb.

— Anyways, a protective box suddenly prevents Nijimi from getting her revenge. Tsuyuno is pulling out all the stops to protect her former friend. Unfortunately, she’s going to end up killing herself at this rate.

— Aya finally realizes that she has to do something if she and Tsuyuno both wanna make it out of here alive. But y’know, if you’re going to shoot a gun, you might want to keep your eyes open. Just a thought.

— Jesus Christ, I know Sarina’s a mahou shoujo now, but I didn’t know it came with amazing acrobatic abilities. She’s dodging all of Aya’s shots by backflipping all over the place.

— Luckily for Aya, her gun also serves as an indestructible shield. How convenient.

— Things start to go out of control when Sarina begins to throw her yo-yo in every single possible direction. Of course, she never accidentally hits herself. I mean, c’mon… do you think this is her first day on the job or something?

— Aya somehow manages to grab one of the sticks in Tsuyuno’s possession and erect a protective box around the two of them. Now it’s time for Dumb to have a little debate with Dumber.

— Our heroine claims that she’ll do whatever it takes to save her best friend. Whatever it takes, huh? Would you even take a life? Somehow, I doubt that, and that’s the most infuriating part about the girl. Look, I don’t condone unnecessarily taking a life either. But if you have to subdue someone in order to protect yourself, well… so be it.

— Sarina stupidly counters that Aya had killed her friends. Y’know, the wannabe rapist and the rapist accomplice. Killer argument. There’s really no drama here, because Sarina is plain wrong. There is no possible world in which anyone would ever feel sorry for her. As a result, this argument between Aya and Sarina is a waste of time. There’s no point in trying to reason with idiots. Nevertheless, Aya still feels guilty. It’s that easy to get to the girl.

— Aya finally stands up for herself: “And did you ever once consider how I felt?” Unfortunately, it doesn’t matter what she has to say. No matter what argument she brings forth, it’ll fall on deaf ears because she’s not talking to an actual person. This is just some soulless monster in the shape of a cute anime girl for our entertainment.

— As predicted, Sarina’s response is braindead: “Don’t you talk back to me! You make me sick! I never gave two craps about how you felt, you ugly pig!” Well, there you have it.

— All I’m saying is that this is supposed to be a powerful moment where Aya finally heeds Tsuyuno’s advice and resolves to become stronger, but the scene instantly falls flat on its face because her opponent is nothing more than an edgy caricature.

— Anyways, Sarina accidentally did so much damage to the building during her rampage that the entire apartment complex is now falling apart. Whoops. You know exactly what’s going to happen next, right? Oh, you know… 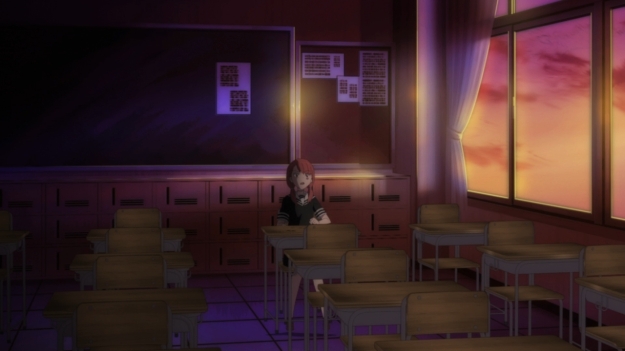 — That’s right! Aya ends up saving Sarina! She’s going to do whatever it takes to save Tsuyuno, you guys!

— Sarina is even warped back to Aya’s desk, but do you think the bully feels any sort of contrition? Of course not: “You think I’d back down because of this?”

— Even though the entire apartment complex came crashing down, Aya still managed to protect Tsuyuno and herself at the last second. Good job!

— We briefly visit Nijimi, and for some reason, this involves a bunch of reused scenes. I guess the episode needed to pad its length. All you need to know is that the dog idol eventually realizes that Aya and Tsuyuno have been protecting Rina this entire time, and she’s going to go nuts on them. Her stalker is also… well, stalking her, but until he actually does something important, I won’t comment any further on his character.

— Aya and Tsuyuno are both rushed to the hospital. The former will probably be fine, but the latter…? Eh… Don’t worry. It’s only the fifth episode, so Tsuyuno ain’t going anywhere.

— Also, I guess the serial killer’s body will be buried underneath all that rubble for now? If the authorities are thorough, they should eventually discover his body chopped up into two halves, but we’ll see.

— Oh look, Aya’s parents are pretending to care about her!

— Nijimi tries to pay Aya’s home a visit, but all she finds is Kaname. She should have no trouble enslaving the guy… in theory.

— Last but not least, we are introduced to a whole new character. This girl likes to pop pills and breathe heavily. More importantly, she has a keen interest in Rina. The box cutter seems to suggest that she might hurt the comatose girl, but it appears that the new girl also wants information about the Tempest. So y’know, I don’t think she’s going to hurt Rina at all. But what is she going to do? Heal the girl by carving her up?