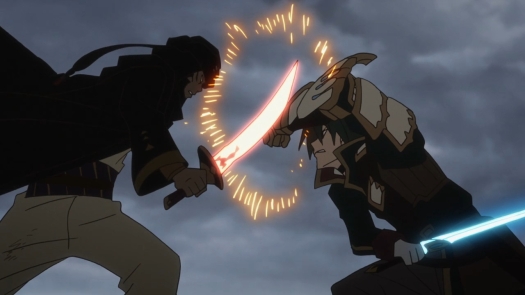 It’s the moment we’ve all been waiting for! In this shoddily animated corner is the the Blaaaaaaack Prince of Dartania! And in this corner is Theo Coooooooooornero of Sistina! Two men will enter, and only one will leave! Place your bets now!

— Rather than sit idly by until Marrine can join up with him, Milza wants to sally forth despite his disadvantage position. To sally… now there’s a verb that you don’t often come across in your everyday conversations. Naturally, Telius thinks this is a foolhardy move, but he should know the rules of the game by now. If he tries to protest, he’ll find a blade to his throat.

— The Black Prince is confident that he won’t lose. At the same time, he says it’s a bad idea to involve Marrine’s knights, because they’re too slow to escape should they fail… but I thought he just said he won’t lose.

— Well, let’s face it… he knows he’ll lose. He’s too prideful to admit it, but he wouldn’t pull this stunt if he didn’t know he’d lose. His only gamble is to trick Theo into a one-on-one duel. That still wouldn’t guarantee victory, but it’s really his only chance at this point.

— Anyways, pride will be his undoing. I still don’t understand why Telius is so loyal to this dude. He’s literally in tears over this. He’s not even contracted to Milza, so why risk his life for him?

— True to his might makes right philosophy, Milza suspects that Theo might be onto something with this whole “power of the people” nonsense: “Perhaps soon we’ll see an age when the people choose their own Lords.” It’s all about victory to the Black Prince. If democracy is the just course of action, it is only just because it wins on the battlefield. Nevertheless, I prefer not to think of my elected officials as lords, though. 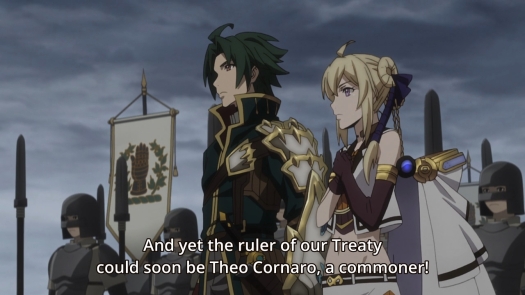 — Theo needs a new outfit. Now that he’s become a respected lord, he needs to step up his fashion game. That’s just how RPG heroes work. Ramza got a whole new look after the first chapter. Denam of Tactics Ogre fame also some swanky uniform for the fourth and final chapter. Meanwhile, Theo and Siluca are still rocking the same clothes they’ve been wearing all series long.

— Unfortunately for our hero, a lot of his so-called allies are elitist jerks: “Only those who come from a long line of eminent Lords are fit to rule as leader.” They rightfully understand that they will be obsolete in the new era. At the end of the day, it boils down to fearing their loss of status and prestige. Reminds me of this article, actually.

— I don’t know who this guy even is, and yet, he’s prepared to die right here and now. I’m sure he was more than likely introduced in a previous episode, but I can’t be assed to care about some minor character. I guess we have to trim the fat before Theo and Milza can officially have their rematch.

— Less than a minute later, this dude has already been defeated. Amazing.

— Milza’s army is running circles around the good guys. This is hilarious. Of course, things will get serious once he has to face off against Theo, but it’s funny how a bunch of nobodies will have to die until that happens. Lassic finally joins the battle because he won’t let the Black Prince get to Theo, but I don’t understand why they’re not leveraging their superior numbers all at once to just crush Milza right there and then.

— Theo tries to do the generic good guy thing and send his volunteer army away, but they convince him that this is their fight as well. After all, what’s the point of rallying the people to your cause if you’re just going to let the lords and knights do all the heavy lifting? There can’t be a revolution if people aren’t willing to die for their cause.

— Telius: “Is this devious, underhanded strategy Siluca Meletes’ handiwork? Damn that devilish woman!” Dude, you’re following Milza. I don’t think you’re in any position to judge. Besides, what is underhanded about raining arrows on your opponent?

— Theo’s party members all take their turns throwing themselves in Milza’s way, but they can’t stop the Black Prince. Nevertheless, they don’t lose their lives either. It’s funny how that works. Our villain can butcher an entire army by himself, but he’ll politely brush the two loli werewolves aside. Can’t kill them! Can’t even wound them where it might affect their appearances! They’re too cute!

— God, this looks embarrassing. Every single moment. Maybe A-1 Pictures will touch everything up for the blu-rays, but that’s even assuming that anyone will buy this series.

— Theo shows up fashionably late just so he can heroically rescue Siluca from certain death. Oh, these heroes…

— Milza challenges Theo to a one-vs-one duel, and you know the latter’s going to accept. This is exactly what Milza wants, but it’s not as though we should be worried. After all, Theo’s going to win. Record of Grancrest War is not the sort of anime to throw massive plot twists at the audience. This ain’t Game of Thrones.

— The prudent thing to do here is to say “Fuck you” to Milza, and take the Black Prince down with the rest of your team. Anime heroes gotta anime, though. Could you imagine if Cecil tried to take Zeromus on by himself?

— Siluca voices her concerns, and the guy simply says, “It’ll all work out somehow.” Bruh.

— When she tells him that he better win, he then goes, “That might be impossible.” Bruh.

— In fact, the animation quality for this entire duel is absolutely pitiful. C’mon, this what we’ve all been waiting for. Everyone who has stuck by this dreadful adaptation has been eagerly awaiting the duel between Theo and Milza for weeks and weeks, and this is all that A-1 Pictures can deliver? Christ.

— Theo’s armguard is “made of metal from another world?” Okay, then. Just leave that bit of information there without any further context.

— Our hero also continues to rely on his strategy of defending until his opponent is too tired to fight back. For some reason, however, Milza is tiring out quickly.

— Milza has apparently been giving up bits and pieces of his Crest ever since he took over Altirk. This explains why he isn’t as formidable the last time he and Theo clashed. Plus, hasn’t Theo gotten stronger?

— The Black Prince’s army has surrendered while he is busy fighting Theo. So much for that. At the end of the day, Milza lost sight of the big picture. He thought he could win by himself, so he ended up neglecting his own men. Even if he won’t ever acknowledge that the era of the people are coming, no leader should ever lose sight of their army.

— Was it really necessary to kill Milza? I’d rather imprison him so he could live with his failure for the rest of his life. It’s not as though he’s a danger without his crest. Ah well, it belongs to Theo now.

— Stupid is as stupid does: Telius decides to commit suicide now that Milza has died. Why? Why throw your precious life away like that? What a fool. 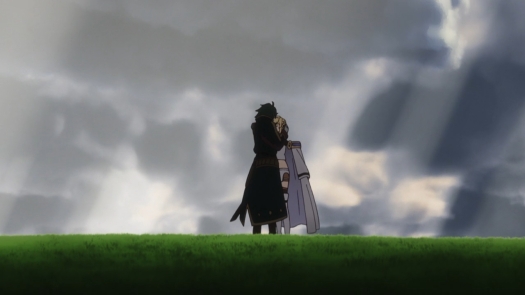 — Siluca wants Theo to promise that he won’t ever foolishly accept a duel again. He assures her that Milza was the only person that he ever wanted to take down himself. So was this his way of avenging Villar? Or did he want to reclaim his pride because Milza had been trashing him since he showed up?

— Look at how light is now shining down upon our heroes and Castle Unicorn. It’s a cheesy reminder that the gods are on the good guys’ side.

— Meanwhile, Marrine wasted all her time and energy just to have to turn around at the last second. We have plenty of episodes to go, though. I can’t see her going down anytime soon unless there’s a supervillain waiting behind her.

— If I was Marrine, I’d be disgusted with Milza… but I guess he was useful soldier to her. How dumb would it be, however, if Theo spares Marrine and she ends up getting back with that pathetic ex-fiance of hers?