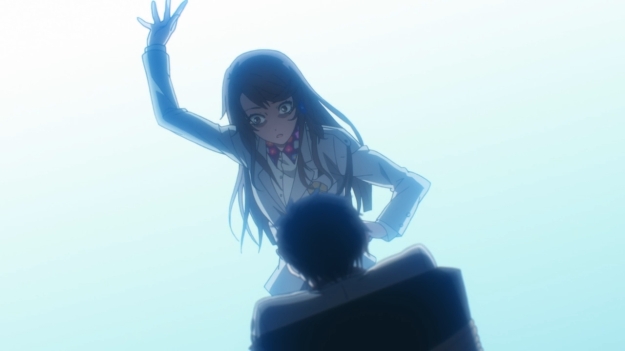 According to this week’s episode, anyway.

— Before I go any further, I gotta mention how I goofed up a lot regarding last week’s episode. I kept referring to the doll guy as Kotono when his name is literally just Shounen Doll. Whoops. Kotono is a completely different character, and we’ll actually meet her in this week’s episode. With that out of the way…

— So Caligula was originally a PS Vita game developed by Aquria. They’re not really well-known unless you’re into weeb games. Recently, they’ve been responsible for a few of the Sword Art Online games. Anyways, Caligula is getting a PS4 remake (or remaster?), and it includes a route where Ritsu can become a double agent and align himself with the Musicians. The remake will soon come out this month in Japan, so I guess the anime is supposed to hype people up for the game. Y’know, Caligula is more than likely better as a game than an anime. You can ignore a lot of the storytelling flaws when you’re having fun playing a game. I could check the game out, but only if the PS4 version is localized. I’m not particularly interested in playing anything on my Vita unless I really have to (e.g. Persona 4: Golden).

— This rich-looking dude drops by the music room, because he wants to be woke too. Unfortunately, everyone but Suzuna seems to be out.

— Meanwhile, Ritsu and Kotaro meets with Marie at the opening of Sea Paraiso. Uh, why are we here? What is happening? Why did this three just decide to go hang out at an amusement park? How did we go from last week’s ending to this? 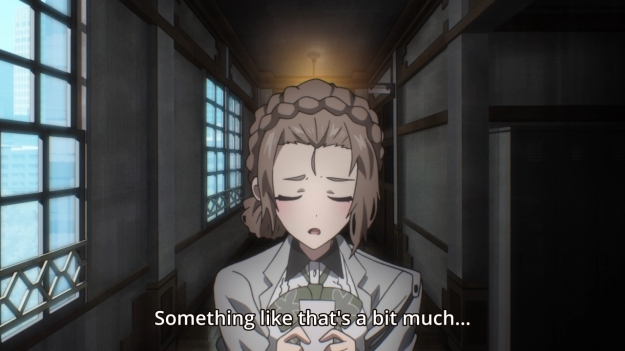 — It turns out Ritsu had gotten exactly three tickets to the amusement park, but other than Kotaro, everyone else was either busy or just too plain shy to accept his invitation. As a result, he invited Marie even though she’s nowhere close to being as woke as him. That’s right, you’re gonna see the word “woke” a lot in this week’s post.

— I guess he can’t recruit Marie, because she’s blissfully unaware like everyone else… but it’s also perfectly safe to befriend her.

— We see this Digihead somehow turn into a normal girl. This is the actual Kotono, and she’s one of the more popular girls here. Every once in a while, she’ll notice Aria, so she’s on the verge of wokeness. That’s just hilarious to me.

— Sea Paraiso also doubles as a coupling event. You go here to hook up with sweet high school girls. It’s almost like a hostess club… but for kids… kinda. Not really. This is probably too lewd for kids.

— All of the girls are led by Mirei, the queen bee of the whole event. She’s also a bit of a sadist. Guys seem to live for taking her punishment.

— At one point, Kotono’s “date” spills water on himself, so she goes to wipe his pants. Geez, he’s a big boy. He can wipe his own damn pants. Nevertheless, all of the other guys take notice and become jealous. As a result, they also spill drinks on themselves in the hopes that Kotono will attend to them as well. This behavior disgusts Kotono, which actually triggers her wokeness. No, seriously. The more she despises men, the more aware she becomes! 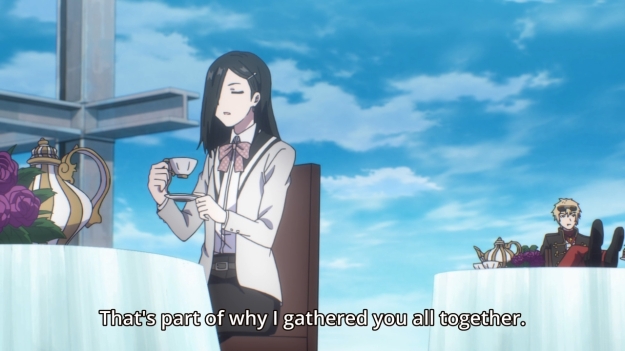 — Ooh, it’s the gathering of the baddies. And like most anime baddies, they’re content to sit around and talk idle nonsense. Should we stop the good guys?! Eeeeeh, let’s just chill and let them power up, gather allies, so on and so forth.

— Aria eventually convinces Ritsu to approach Kotono. This is purely for recruiting purposes, though. Their team needs more members in order to form a resistance against the Musicians! Unfortunately, Kotono thinks Ritsu is trying to hit on her. Whoops. Not quite woke yet.

— In fact, all of the men get mad at Ritsu for trying to cut in line. Yes, you need to grab a ticket in order to spend time with Kotono. She’s just that awesome.

— She eventually deals a deathblow to Ritsu’s pride.

— If you’re wondering what Mifue and Naruko are up to, they’re still looking for the former’s mother. Eh.

— Meanwhile, Kotaro and Marie continue to wait for Ritsu to return when they notice a bunch of kids entering a suspicious-looking building. The guy is rather adventurous, so he decides to take a peek inside. At first, the place seems innocent enough. We appear to have an aquarium at a sea park, which makes perfect sense. Plus, anime seems to have this idea that there’s nothing more romantic than a date to an aquarium. Maybe it’s cultural thing, ’cause I’ve never taken a date to an aquarium in my life.

— Upon further inspection, however, Kotaro and Marie discover that couples are up to no good in some of these closed rooms! 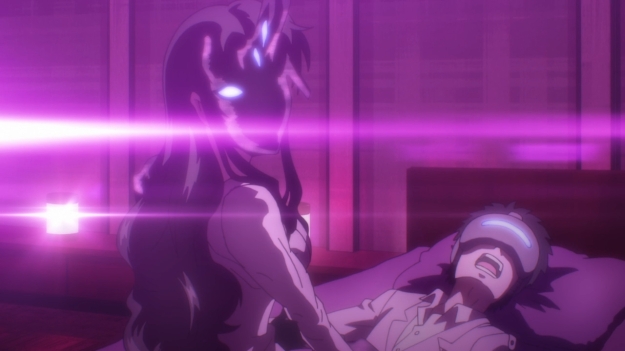 — So… virtual sex while a Digihead is grinding on you?

— Apparently, Sea Paraiso is place to indoctrinate young men back into loving Mobius. You lure them in with cute girls, then you brainwash them! Even Ritsu isn’t impervious. You just have to let him drone on and on about all his favorite esoteric subjects. Make him feel like a genius, and you’ll have in the palm of your hands. But… they’re already in a virtual reality. Do you really need to strap a device on their virtual heads in order to brainwash them? Ah well.

— Plus, is this place just not interested in brainwashing heterosexual girls at all? Maybe there’s a female-equivalent to Sea Paraiso somewhere out there.

— Unfortunately for our villains, Mirei can’t keep her composure. She ends up getting jealous over all the attention that Kotono gets, so she challenges the girl to a duel.

— So the main event begins, and it’s a popularity contest between Kotono and Mirei. The latter wants to brainwash the former, but not before establishing her supposed superiority. You already know what’s going to happen next. This contest will trigger Kotono’s hate in men, so she’ll become permanently woke. As a result, she joins the good guys. Had Mirei just kept her jealousy under control, then she could’ve just brainwashed Kotono without all this ridiculous song-and-dance. We even open up with a swimsuit competition. This is so stupid.

— Somehow, Ritsu is magically transported on stage to serve as the final deciding vote. Again, why? Why choose him over all of the guys in the audience? Of course, Ritsu resists picking between Kotono and Mirei, and this angers the girl even further. She’s mad at his indecisiveness, so this pushes her closer to being woke. So like I said, had the Musicians just picked anyone else, they could have prevented Kotono from joining the other side. It’s almost as if they’re sabotaging themselves. Maybe it’s this “self-handicapping” thing that Ritsu was just talking about earlier in the episode. Or maybe they’re just idiots. 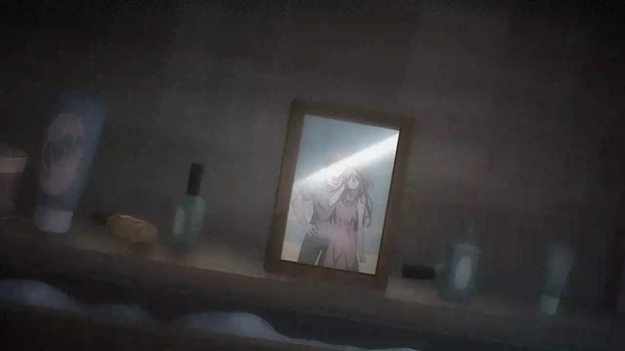 — So real world Kotono was probably an alcoholic, and ended up abandoning her precious Tak-kun. I think Tak-kun is a former lover…

— Anyways, the girl realizes that she no longer wants to remain in Mobius. She wants to go home and be with her Tak-kun. Maybe her hate for men is just an excuse to avoid the fact that she had hurt him terribly. Maybe she’s trying to assuage her guilt with misplaced anger.

— Thinking that Ritsu is Tak-kun, she embraces him. Not only does he end up voting for her, every guy in the audience does so too. Mirei is furious, but Kotono doubles down on the fact that men are idiots… but she now accepts that she still loves one of them? And this realization is what makes her permanently woke? Oh lord.

— More importantly, Kotono undergoes the Catharsis effect, so the girl is now armed with a bow. Fancy. So we have at least two… but we’re already five episodes in and Ritsu still hasn’t gotten his fancy weapon.

— As Kotono makes her triumphant speech, we also get to see Mifue reunite with her… mom? Like, it’s her virtual mom, right? Why is she so attached to someone who isn’t real? I guess she doesn’t realize that yet even though she’s supposedly woke. Also, Shogo is chasing after someone, but the person slips out of his grasp. These guys have way more baggage than Ritsu, which is probably why he’ll end up being the leader.

— We’re not out of this yet, though. Mu starts singing, so Digiheads start appearing all over the place. We’ll probably have a big fight to open next week’s episode. 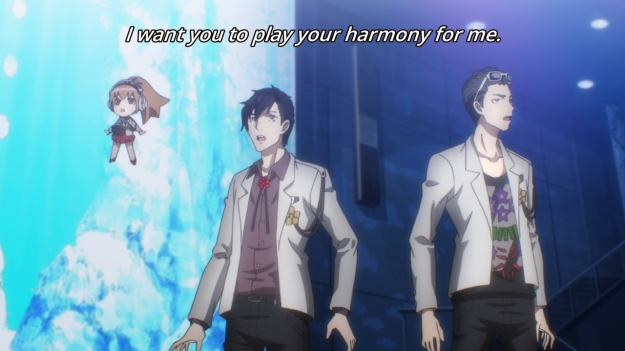 — Eh… another week, another mixed bag of an episode. Yeah, I’d probably enjoy this story more in the game than as an anime. In fact, I can’t see how the adaptation could possibly wrap up this story at the pace that it’s going. Then again, according to “How Long To Beat,” Caligula only takes about 20 hours to beat (assuming you don’t do extras). That’s pretty short for an RPG. Nevertheless, I could see the story ending on a cliffhanger, thereby requiring you to get the game in order to see the conclusion. If the PS4 version ever comes out at like… 40 bucks, I’d give it a shot.

2 thoughts on “Caligula Ep. 5: Hating men is the first step to being woke”