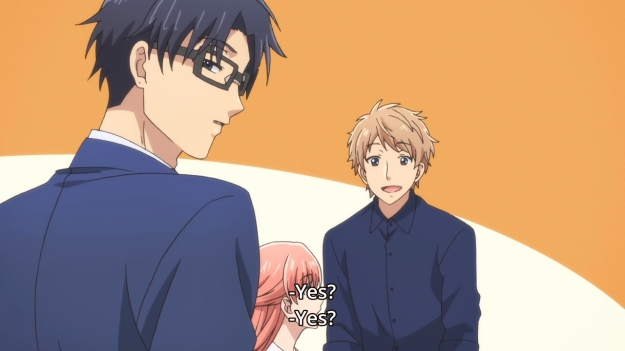 Could anyone possibly steal Narumi away from Hirotaka?

— Also, these two don’t look comfortable in their own home. Why are they wearing their work clothes outside of work?

— Hirotaka wanted to be all grown up when he was a kid, and now that he’s all grown up, he wishes he could be a kid again. That pretty much describes all of us, doesn’t it? Of course, I’d make one minor change: I’d like to be a kid again, but still keep all my independence. I can’t stand the thought of having to ever live under the same roof as my parents ever again. Ugh. I’m one of those Asians who do not feel any sort of filial piety.

— At work the next day, Hirotaka falls asleep at lunch. I bet the guy hasn’t been getting enough sleep, because he stays up to play games all the time.

— Starbocks? Why not just come up with an entirely different name?

— I like frappes, but then again, I have a sweet tooth. I’ve never ordered so many add-ons, though. I also haven’t had a frappe in over a year. I guess you could say I don’t like them that much. Rather, I just dislike this gatekeeping tendency from coffee lovers to look down on people who enjoy frappes. They’re not hurting you by loading up their drinks with cream and sugar, so why do you care?

— Regular size? Don’t you mean tall? God, I hate Starbucks’ naming convention. One time, I said small, and the lady just condescendingly replied, “I’m sorry, but we don’t have a size small.”

— Oh ho ho, Narumi thinks that her barista is cute.

— In fact, they seem to know each other.  had initially thought that we might have met a rival for Narumi’s love or something, but Taro and Hanako are freaking out in the background. That makes me think that this is a perfectly innocent encounter. 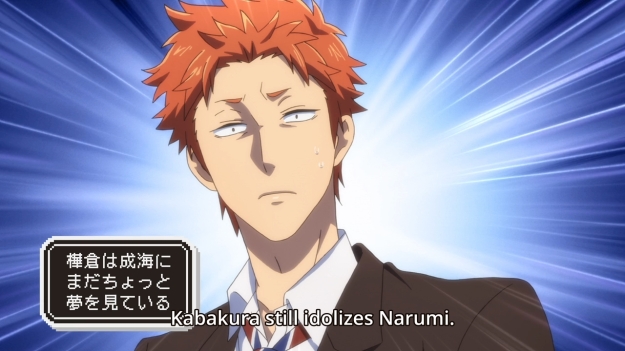 — Hanako wants to stay out of it, so she convinces her boyfriend to hold his tongue. The guy is having a real hard time of it, though. I wonder if he wants to do his bro a favor or something. Still, nothing here is setting off any alarms. Narumi is showing Nao pictures of some cat on her phone. Unless there’s, like, physical contact, who cares? Then again, maybe Japanese culture is more sensitive about this sort of thing.

— Ah, Taro is projecting his feelings.

— Hirotaka then just slips into the scene without Taro noticing. Hanako had invited him, so for all her talk about staying out of it, she just didn’t want to confront Narumi herself.

— I’m amazed that Narumi hasn’t noticed her friends freaking out in the background, but anime characters are always oblivious to their surroundings.

— Hirotaka proceeds to calmly walk over to Narumi and Nao, so this cements even further in my mind that nothing weird is happening here. Maybe Nao is like a former childhood friend or something.

— Oh… both guys respond to “Nifuji.” There you go; they’re brothers.

— Nao now wants to crash at his big bro’s apartment, so Narumi invites herself as well. I wonder if Narumi is into incestuous yaoi fantasies.

— Man, why are these two bros so friendly to each other?

— In fact, everyone has decided to come over. Taro still seems rather suspicious of Nao. According to Hanako, he insisted on coming over, so maybe he wants to keep an eye on the little bro for some reason.

— “Squid Girl?” Are they talking about Splatoon, maybe? 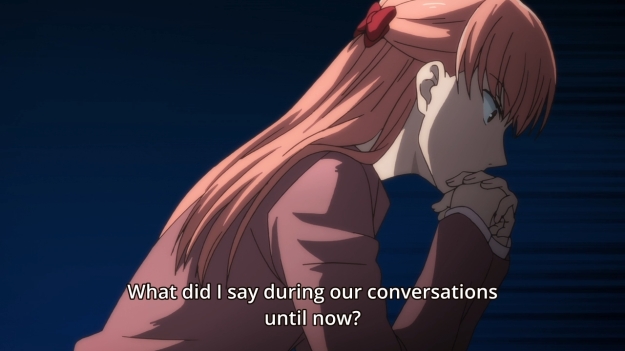 — Everyone’s freaking out about the fact that Nao is a normie. Everyone but Hirotaka, of course. I don’t really see what the big deal is, but I guess the show has to dramatize everything for entertainment purposes. Narumi is so obsessed with concealing her otakuness. I guess I just can’t relate. Unless you’re literally bringing a body pillow with your waifu on it to work, I don’t think anyone would give a shit that you’re an otaku. And if they do, then they’re not worth getting to befriending in the first place.

— Narumi’s trying to so hard to accommodate Nao, but I don’t think anyone likes being treated differently.

— Sounds like they’re playing Smash Bros. It’s not a game that I care for, personally. Needless to say, Nao is thoroughly a casual. He did not inherit any of his brother’s aptitude for games at all. Not even a fraction of it. Nao is worried that he’s let his brother down, Narumi is worried that Nao might be put off, and Hirotaka just doesn’t give a shit.

— Personally, you wouldn’t want to be on my team in any game. I hate losing. This is why I generally play single player games where I don’t have to depend on others to succeed.

— Nao offers to walk Narumi to the station, but Taro insists otherwise: “…she has a boyfriend, so don’t make things complicated.” Where is this even coming from? There hasn’t been one remotely flirty thing that has occurred between Narumi and Nao, so what gives? I’d understand if Nao had been touchy with her all night, but uh… this is such an overreaction.

— The kid initially thinks that Taro was referring to himself, so Hanako had to force a kiss on her boyfriend to clear things up. She’s too good for this show. Taro, on the other hand, is a jackass. He’s all worried about other people’s relationships, but he can’t even handle his own.

— Nao had no clue that his brother and Narumi are dating. Her response? “But, anyway… I guess…” Man, that girl sure is confident about their relationship.

— The little bro suddenly starts crying out of nowhere. But he’s not crying because he has feelings for Narumi. He’s just glad that Hirotaka won’t die alone. In fact, he’s been rooting for his big bro all this time. It’s okay to be alone, guys. People can still live fulfilling lives without a partner. 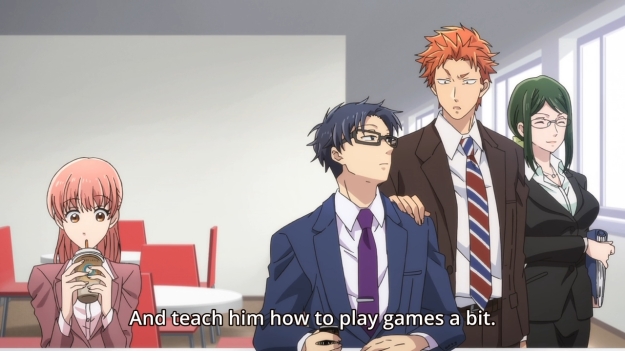 — In any case, after last week’s troubles and now this week’s nonsense, Taro comes across as the least likable character on the show by far.