Ah, it’s Yusuke time. Yusuke is a tricky boy to assess. His Persona looks cool, but his character design isn’t very interesting. I never used him in battle much either. As a physical fighter, I felt that Ryuji eclipsed Yusuke in all the important ways. Elemental advantages aren’t worth considering either since the main character is the wild card who can easily cover Yusuke’s weak ice advantage (he doesn’t have high INT). When Yusuke’s with the rest of the group, he often peppers the conversation with his idiosyncratic nature. He adds a nice amount of levity, but in his oddball sort of way. Nevertheless, when I’m actually hanging out with him 1-on-1 in a social link, I find him boring. Overall, I just find him underwhelming as a party member. In my mind, he ranks just above Haru (who I absolutely despise).

I also always found it odd that this guy didn’t attend the same school as the rest of the party, but then I read later that they had initially planned on making Hifumi a playable character. Had that been the case, then you’d have two party members attending the other school. At the same time, however, I wouldn’t have been particularly thrilled to have Hifumi on the team. Nothing against her character, but I don’t find her remotely interesting outside of the bonuses conferred by leveling up her social link. You can tell that I’m not really into the soft-spoken maiden archetype. I also disliked Yukiko in P4. Anyways, time for notes and observations for the rest of the episode…

— Yusuke makes Ann blush here, but I always found it hilarious that he only admired her for her physical looks. The more he got to know her, the less he liked and respected her.

— They should’ve had the passersby turn and look at Yusuke’s wild proclamations.

— I don’t remember Kawakami nodding off in the game, so this is something new.

— Speaking of tests and exams, I do like the fact that you can actually finish at the top of your class in Persona 5. Trails of Cold Steel is clearly influenced by the school life format of the Persona games. You have to attend class, you have a limited amount of time to hang out and cultivate relationships with your classmates, and most of all, you gotta take exams. But unlike Persona 5, you can never finish at the top of your class in Trails of Cold Steel. Even if you study your butt off and answer all the questions correctly, I believe Rean, the main character, can only finish third at best (behind Emma and Machias). God, that pissed me off. Of course, the game has its pros and cons. There are some things that it does better than the Persona games. Just not the test-taking part.

— I think Ren is a little too quiet. He was a little more vocal in the first two episodes, but lately, he’s all but faded into the background. Like its predecessors, this adaptation is afraid to give the hero a stronger characterization. Who cares if he’s different from how you or I envisioned him? I mean, as long as he’s an interesting and compelling character, it’s all good.

— Isn’t it crazy that Makoto’s “braids” are really just her hairband?

— She can’t be that sharp; she didn’t even notice the fucking cat that hightailed it out of there as soon as she showed up.

— But nah, I like Makoto in general. If I pretend that she isn’t some sheltered girl who knows nothing about the real world, then she’d easily be the number one girl. Too bad it’s actually a big part of her personality. I groaned when I had to take her to the arcade for the first time. The arcade. C’mon.

— Madarame is definitely a bad guy, but after the whole Kamoshida thing, the old man felt like a letdown. I never really got a feel for his heinous nature. I never felt like he was truly a big fish that the Phantom Thieves had to fry in order to reform society. In terms of social impact, I guess I have a hard time believing that a painter figures into the equation. Not to be dismissive of the contemporary art scene, but it really has little to no influence on our daily lives. For instance, my peers don’t even know anything about Mark Rothko. It’s not that they’re uncultured. It’s just that this sort of art barely leaves a mark on our collective consciousness.

— Plus, it never made sense to me how he got away with stealing his pupils’ works. Everyone has their own style, so it would’ve been blatantly obvious that Madarame’s works seem to vary wildly in not just vision but technique as well. There should be no consistency to his oeuvre. The characters even point this fact out, and yet, you want to tell me that art connoisseurs in general have no clue that this old man is a fraud? C’mon. Sure, the story tries to hand wave this away later on with a certain painting that gets copied and sold to everyone, but that alone raises a whole bunch of new issues. For instance, don’t these rich people talk? Wouldn’t they brag to each other that they just bought Madarame’s most famous painting? How would that sort of news not spread like wild fire? And once it did spread like wild fire, how would these people not raise a stink about the fact that they all seem to have the same shitty painting?

— Wow, is it just me or is Yusuke’s pants way too shiny?

— I can never unhear Kyon when Tomokazu Sugita is tapped to play a character. Now there’s a show that could use a se… maybe not. I only want a sequel if they actually give closure to the story.

— Ooh, Hifumi has her own game in this adaptation. It’s also cool to see Morgana and Ryuji hang out with each other more. It might explain why the cat trolls him so much. I never felt like they spent enough time with each other in the game for the cat to be so mean to him. Granted, he is an idiot.

— That statue is Shibuya’s Hachiko, right?

— Madarame treats his pupils like slaves. He teaches them nothing and bosses them around. He disciplines them as if they were dogs. Yeah, like I said, he’s a bad guy, but… is he really a societal bad guy? Is he really someone that these children have to rebel against?

— I think mostly the thought process here is that Madarame’s a big target, and the Phantom Thieves feel compelled to reel in a big fish to establish their legitimacy. Even so, however, I think I would’ve gone for a different villain.

— To be fair, Madarame’s art theme lent it self to some cool moments in his dungeon, especially the part where you dive into his paintings.

— C’mon, Ann… you just dealt with a PE teacher that was widely beloved by the entire student body up until his scandals came to surface.

— I hope the adaptation kept my favorite gag from the game. If you’ve played it, you know which one I’m referring to. Erika Harlacher’s performance during that scene was really on point.

— Speaking of which, I hope they’re gonna get the same voice actors back for the inevitable dubbing of the adaptation. Except Haru, ’cause ughhh…

— Ryuji’s so dumb. Lemme just ask this guy right here and right now if he’s being abused. Surely, he’ll just admit to everything. Our blond boy has no sense of subtlety.

— I’m pretty sure Madarame didn’t invite the kids into his home. I’m also pretty sure Yusuke showed them this famous painting on his phone instead of from a book. Still, I don’t mind this change. This seems more natural than just standing at someone’s doorstep, gawking at their phone.

— This is such a silly reason to think that someone is a good person. Then again, Ann is supposed to be a bit of an airhead, which is a development in her characterization that I never liked. I thought it was such a low-hanging fruit. Oh, she’s an aspiring model and also a blonde. Let’s make her dumb!

— Plus, they could always just check their Meta-Nav app to see if someone has a palace or not. I’ll grant that this probably didn’t occur to them until now, though.

— Ryuji: “He is an artist, so it ain’t weird for him to have a Palace.” What are you implying, man?

— I can’t remember at what point the difficulty takes a jump up. I think maybe the Egyptian-themed Palace? Certainly not this one. I thought the museum was a breeze.

— Oh, this is new as well. Like with Kamoshida, the adaptation gets right to it. Our characters literally get to hear Shadow Madarame confess all of his crimes right here and right now.

— Man, Ryuji freaks out, but Ren has no reaction to Yusuke’s desire to paint Ann in the nude. C’mon, man, that’s one of your potential waifus! Why cast Lelouch into this role if you’re not going to give him a personality?

— Speaking of Lelouch, can you believe they’re going to bring him back for a third season? That’s just not right, man. Anyways, I digress…

— I don’t think you understand the definition of plagiarism, bro. Ideas don’t need to be stolen for it to be plagiarism.

— Yusuke is supposed to threaten our heroes with reporting them to the police unless Ann agrees to pose nude. Poor girl keeps being sexually victimized. For some reason, however, this threat seems to be have left out of the adaptation.

— I like this change: Ren makes sure that Nakanohara doesn’t see his face. The other two members are actually scattered around the area to listen in on the conversation discreetly. In the game, all three of them meet the guy head-on. Not exactly very sneaky for Phantom Thieves!

— Well, that does it for this week’s episode. Yusuke should finally join the team in next week’s episode. This episode is fine. Still, one thing bothers me: Ren has barely spent any 1-on-1 time with his confidantes. I think he’s maybe taken a trip to see the doctor and that’s about it? 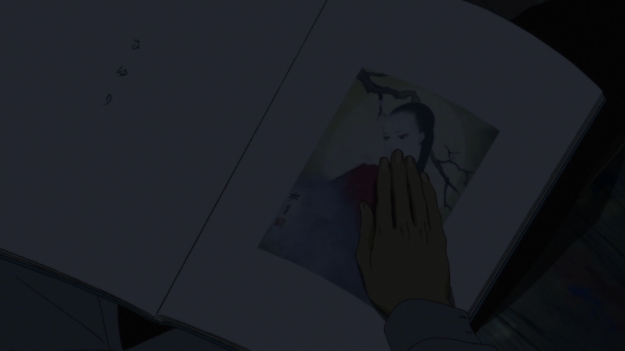 — In the post credits scene, we see that Yusuke already feels some sort of connection to Sayuri.

5 thoughts on “Persona 5 The Animation Ep. 6: A contemporary artist is a fraud? No way!”