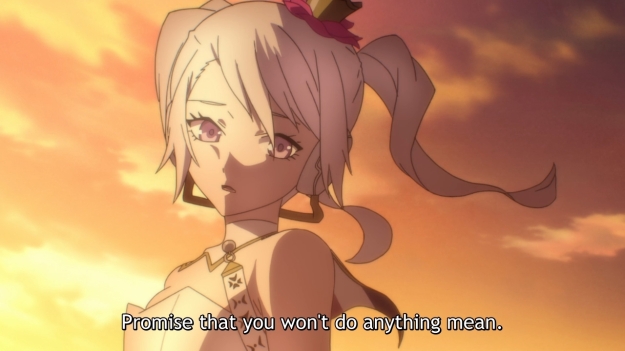 — She wants Thorn to promise her that the Musicians won’t be mean to the Rogues. Isn’t this her world? Can’t she see what’s going on in her own world? Like, for instance, how her songs violently turn people into Digiheads? And then the Digiheads threateningly pursue their targets to all corners of Mobius? For a creator, Mu is goddamn clueless.

— Mifue locates her first mom, but she finally realizes that the woman is just an NPC. Welp, I guess she had to see it with her own eyes.

— Unfortunately for Mu, fights have broken out all across Mobius. Kotono and Mirei are still going at it. Shogo is being chased by a kid with glasses. Meanwhile, Mifue and Naruko have to contend with the ramen freak again. Last but not least, Suzuna and the new guy is being confronted by a wannabe pretty boy with guns. How mean.

— Mirei tells Kotono that the girl should just be content to swim in her aquarium. The latter replies, “Real fish want to swim in the real ocean.” Mirei immediately counters, “Can you still say that when the ocean is filthy and filled with sludge?” So it’s kind of an interesting debate, but it’s done in the most simplistic way possible. Yeah, most animals do not want to be locked up. So that’s one point in the Rogues’ favor. People don’t want to live in a false paradise. At the same time, however, certain species might not survive in the wilderness. This is why certain programs will take in these endangered species and try to ensure their survival. So that’s one point in favor of “captivity.” Therein lies the problem, though: why does Mobius have to be so fake? Why can’t its subjects simply be told that they’re living in the virtual world for now because the real world is so terrible? Why not tell them the truth? What is the point of all this deception? What purpose does it serve?

“Well, you see, if they knew that the real world lies somewhere out there, then they might want to leave!”

— Look at ramen freak rain arrows down on Mifue and Naruko. Guys, c’mon, stop being mean. 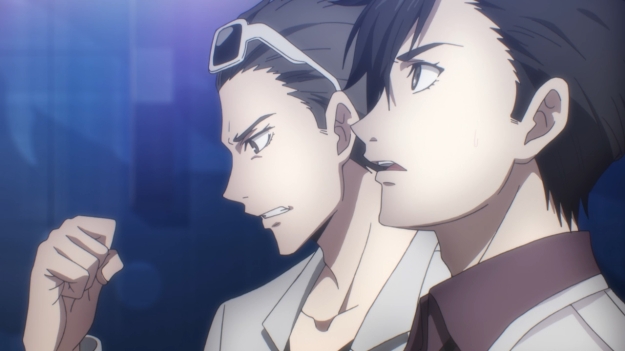 — All Ritsu can do is stare at everything in front of him with a slack-jawed impression.

— Oh hey, Mu can tell that everyone’s in pain. But then Thorn tells her that this is all for the best, so the girl just goes back to her stupid singing. Look, she’s an idiot! Unfortunately, she sits at the center of this entire story, and it’s apparently Ritsu’s job to eventually save her at some point. That’s so lame.

— Back to Mirei and Kotono, the former exclaims, “If I stay here, I can live an elegant life the way I used to.” So in the real world, she must have been someone who recently lost her wealth. But fine, stay here then! Again, why does it matter to her if Kotono wants to leave? If there’s a legitimate reason for the Musicians being such dicks to the Rogues, then why haven’t we been told said reason after six episodes?

— Naruko’s real world counterpart seemingly wants attention. On the other hand, Kotaro feels powerless due to a failure of his in the real world. What was he? A first responder who couldn’t save people in time? But that’s not important. What’s important is that the Rogues are determined to leave Mobius, so this causes Aria to shine. As a result, she becomes a star that they can all follow. Everyone starts to scream as they embrace the darkness with them. Yeah, it’s really that corny. And before you know it, they’ve all undergone their own Catharsis Effect. They’re all ready to fight.

— So uh, what is Naruko’s weapon? A torn backpack with… what? A computer in it?

— Meanwhile, Mu continues to be confused, because she doesn’t understand why no one wants to stay in her fake ass world. Again, why don’t you ask them?

— So a huge fight breaks out between the Rogues and the Musicians. Shogo calls himself a murderer, and we’ve seen that he’s traumatized by visions of a girl committing suicide. Maybe he drove her to it, who knows?

— The only person not fighting for the Rogues is Ritsu, because he hasn’t awaken to his powers. His counterpart appears to be Thorn, because she isn’t helping the Musicians out either. She’s just chillin’, I guess. Chillin’ and watchin’.

— Ritsu doesn’t understand his buddies’ feelings. I dunno, maybe ask them. I know it sounds crazy! I know it sounds like madness! But there’s this cool thing you can do where you communicate with others, and in doing so, you understand them! Granted, he hasn’t had a chance to get to know everyone, but with that being the case, y’know, maybe he should chill out and just let things play out for now. 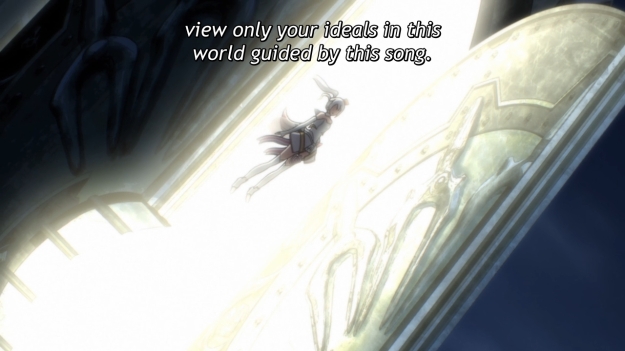 — All of a sudden, a giant portal opens up, and Mu emerges while singing one of her shitty songs.

— She starts to rage out some more. She demands to know why everyone hates her world and won’t listen to her, but as soon as Aria tries to talk to her former partner, Mu tells the chibi idol to shut up. I… I’m just speechless, dude. This girl is an idiot. I wouldn’t want to save her.

— Mu then starts to really go nuts, and Mobius begins to fall apart. The Musicians quickly hightail it outta there, because they’re in danger as well. The sclera in Mu’s eyes turns black, and subsequently, a black mass emerges from her chest. Aria explains that Mu had been holding onto people’s negativity this entire time. But now that she’s frustrated and distraught over the Rogues insisting on leaving, she’s unable to hold the darkness within herself any longer! Y’see, it’s our fault. Our dark energies and negative emotions are poisoning Mu. Mm-hmm!

— Look, nobody asked Mu to do this. Nobody asked Mu to be a martyr. She created this stupid world because she felt bad, then she shoved all these people in her stupid world because she felt bad. Whatever happened to personal choice? Whatever happened to personal accountability? If she’s suffering because she tried to absorb people’s painful feelings, that’s on her. If people have issues to deal with, it’s their responsibility to sort it out. In fact, it’s their right to sort it out. We become stronger by overcoming the obstacles in our lives. All Mu has done is robbed them of personal growth, and now we gotta pity her while she conveniently ignores every possible chance to communicate with the very people she’s imprisoned? Fuck that.

— Ritsu hasn’t undergone a Catharsis Effect, because whatever ails him isn’t quite as well defined as the other kids. He doesn’t have such a vibrant past to draw upon. So he gives Mu a good stare… he gives her a really good stare. And just like that, he’s reached a pivotal moment. He’s not determined to merely escape. He’s determined to save Mu. Pardon me while I barf.

— The guy then undergoes his transformation, and more importantly, he does so without Aria’s help at all! ‘Cause he’s special protagonist boi, and as a result, he must be distinct from all the other chumps. 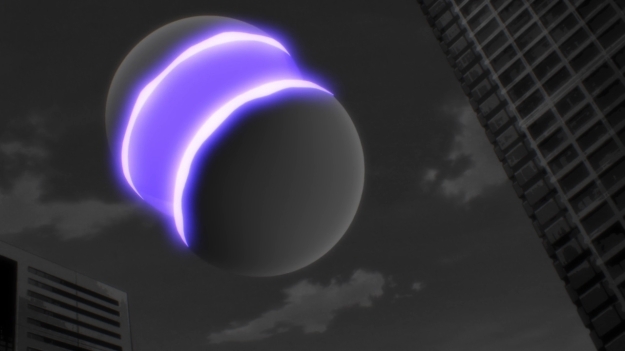 — He whips out a pair of guns, and with them, he somehow cleaves the giant ball of negative feelings in half.

— As a result, Mu nearly passes out, but Thorn is just waiting to catch the idol and whisk her off to god knows where. It’s almost as if Thorn masterminded this whole event… or at least saw it coming.

— Mu summons the last ounces of her energy and calls Ritsu a mean ol’ baka. Such a meanie! How dare he shoot her black ball of evil?!

— After the dust has settled, Shogo suggests to the rest of the group that they should all join the club in order to conceal their activities of rebellion. Recently, we’ve gotten a rash of JRPGs where kids do cool stuff under the guise of a club. Tokyo Xanadu is another prominent example. This trend will die at some point, but it’s so hot right now. I blame Persona 3.

— Ritsu comes up with the official name for the team: the Go-Home Club. That’s pretty straight to the point. Shogo then nominates him to be the club president, because after all, he’s the special protagonist boi. He can’t ignore them, because they all just smile silently at him. Hey, in Tokyo Xanadu, the main character also becomes the club president even though he’s hardly the most powerful member on the team (shockingly enough).

9 thoughts on “Caligula Ep. 6: What happened to personal choice?”