Aoi isn’t in any real trouble. Even though Moonflower hasn’t been doing much business lately (her best customer is sadly Oryo, a woman who used to want her dead), two strokes of good luck later and everything is suddenly A-OK. Without any semblance of a struggle, there’s also no payoff. We already lack a strong romance between the heroine and the main love interest. If the act of opening a restaurant fails to be compelling either, then what does Kakuriyo no Yadomeshi have left to offer?

— Byakuya, the chief accountant, is mad that Moonflower isn’t making any money, but nothing comes of it. He merely reminds Aoi that she better turn this ship around or she’ll have to marry Odanna! So, y’know, the basic gist of the plot. Our girl still has plenty of time before she has to throw in the towel. Plus, Odanna has stopped putting any pressure on the girl, and he’s the one who calls all the shot. Oh, he’ll tease her from time to time, but again, nothing comes of it.

— The only other interesting tidbit from Byakuya is that he hates Shiro. You either love the old man or hate him. For someone who lives and breathes numbers, it makes sense that the chief accountant would hate Shiro’s frivolous nature. In fact, he kinda seems like a dick.

— So Aoi is stuck with having to save her dying business, but she doesn’t have to wait long before the first stroke of good luck hits her right in the face. Apparently, a writer has been staying at the inn, but he’s struggling to finish his work. Because he’s struggling to finish his work, he’s not eating any of his meals. But because he’s not eating his meals, it becomes increasingly hard for him to focus on his work. Ahhh, how terrible! So Oryo suggests that Aoi whip up a week’s worth of bentos. Easy to eat bentos, to be exact. Why should Aoi lend a hand? Well, the writer also happens to publish his works in the local newspaper. Eh? Ehhhh? How ’bout that advertising that I’ve been harping about for several posts now?

— But before Aoi can come up with a suitable bento for a busy writer, she gets distracted by Odanna sauntering through the rain. She decides to join him, because… just because, I guess.

— So he takes her up to visit the nearby hot springs, and they’re red. Red hot springs, man. This sort of thing occurs in real life, too. Thanks to a high content of iron in the water, this place literally has red hot springs. Kinda cool-looking. 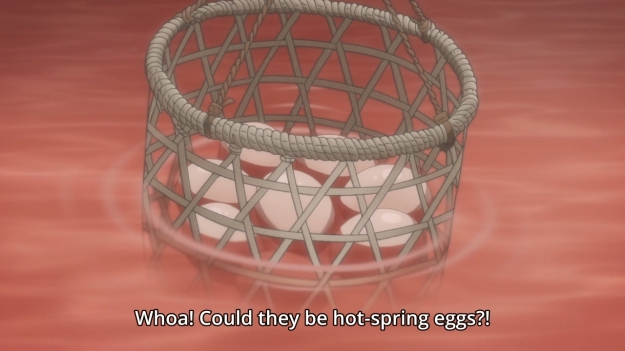 — Y’know, I’ve had and enjoyed onsen eggs… just not literally cooked in an onsen. So what are onsen eggs? They’re really just slow-cooked eggs. If you love runny yolks, then you’ll love onsen eggs. Obviously, the real thing looks a lot better than what you see here. For instance, I like the photo in this blog post. Onsen eggs can be enjoyed simply with dashi, soy sauce, and green onions on top. I like ginger too.

— Afterwards, Aoi and Odanna dry each other, because this is still a lame-o romance, so we need lame-o moments. Wake me up when they ever escalate to making out.

— Odanna is surprised that Aoi would join him on his walk. He starts to explain why he’s surprised, but then he cuts himself off. Does the girl press him on the matter? Of course not. It’s anime, so people naturally stop communicating all the time.

— After Odanna finally leaves, Aoi is back at the bento conundrum. She finally figures out that a writer with a pen in hand would probably like a meal that can be simply eaten with the free hand. As a result, she puts together some bentos that can be eaten with a simple skewer. Welp, that was simple. I wonder why nobody else thought of that.

— The writer eventually drops by to express his gratitude. Every time Aoi sees someone with a non-ogre mask, her curiosity gets piqued, but honestly, I’d be surprised if the ayakashi who helped her doesn’t turn out to be Odanna in the end.

— So the writer is a tanuki, and he would like to try more of Aoi’s food, so she serves him a dish that includes one of those onsen eggs. It looks kinda uninspired, but this whole anime is rather uninspired.

— When the guy realizes that she’s related to Shiro, he kinda freaks out. Everyone knows Shiro. Everyone. In fact, fictional villains in the hidden realm are often based off of Shiro for some damn reason. I’m really getting tired of hearing about Aoi’s grandfather all the goddamn time. 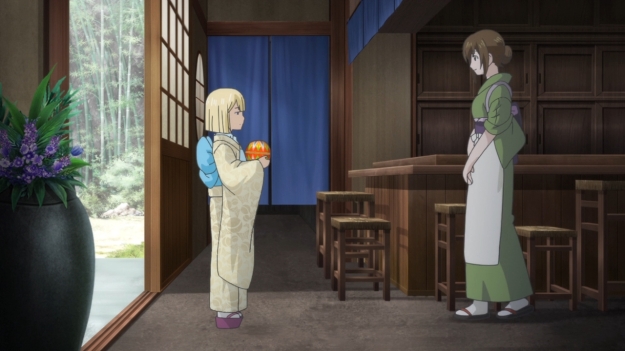 — Then for some reason, this little girl shows up with a ball. She came by just because she had smelled some adzuki beans. Ginji had suggested just moments ago that maybe an anmitsu-inspired dessert would bring in new customers, so the little girl gets to try azuki gelatin. Personally, I’m not a fan of the thing, but to each their own.

–So the girl likes it, gives Aoi the colorful ball, then disappears. When Ginji returns, he suggests that the girl was a Zashiki-warashi. Basically, Aoi just got some good fortune. Maybe I’d appreciate this show more if I knew anything about Japanese folklore, but alas…

— All of a sudden, Moonflower is super busy. Not only that, it’s been busy for days now. Why? ‘Cause that friendly tanuki put in a good word about Moonflower in his latest article. But maybe the Zashiki-warashi had something to do with it as well. I wish the story had just stuck to one thing. Either way, however, Aoi’s business survives because she’s lucky. Sure, she came up with bentos that would work for the tanuki, but again, was her solution really all that clever?

— Nevertheless, the good times keep on coming: Byakuya informs our heroine that she’s been summoned to the imperial court. Why? A royal family member has a human wife, and she wants to try some human food. Tune in next week to see how that turns out… or not. Whatever. That’s how excited I am about this show.

3 thoughts on “Kakuriyo no Yadomeshi Ep. 7: No worries”