— I’m surprised to see that Kana/Kagari is suddenly conscious, though. What was the point of having her pass out at the end of last week’s episode if it wasn’t going to amount to anything?

— Gee, I wonder why. Maybe we could zoom in a little closer, ’cause I think the plot is going over my head.

— After watching the original series, however, it’s very difficult to trust anyone in this series at their word. Kana claims that the name Kagari is nostalgic, but how do I know that she isn’t some secret operative sent here to fuck Rintaro’s shit up?

— This situation must be hard for Suzuha to explain to the normies. Yeah, it’s weird to call Mayuri and Rukako normies, but compared to a time traveler, they are as normal as can be.

— Mayuri does her usual “sweetest girl in the world” shtick, and it’s not that I distrust her. It’s not that I think she’s a phony. I’m truly convinced that she’s actually this nice, which is great, because nice people are great. I’d probably love to have her as a friend in real life (if such a person could even exist). But in fiction, I prefer to follow interesting characters over those that I would like to befriend. And sadly, there is nothing more bland and one-dimensional to me than this archetype. Nevertheless, it is can be found across all forms of Japanese media.

— Rintaro fills Moeka in on the big news. He also requests that she continue to look into the group that is supposedly looking for Kagari. I thought he distrusted her. Was it really wise to give her so much information? He could’ve asked her to continue looking into the third party without letting her know that they had found Kagari.

— Whenever there’s a scene with Maho, but Rintaro isn’t present, someone will inevitably bring him up and tease her. I find this kinda dumb. She’s this brilliant researcher, and all her colleagues ever want to talk about is her love life.

— Rintaro tells Rukako to make sure that Kagari never goes outside alone, but he won’t tell the guy exactly why he’s worried. You could argue that he doesn’t want to scare Rukako, but don’t you think being this vague would also make the latter worry? Plus, would Rukako even have the means of protecting Kagari?

— Suzuha looks like she has her guards up and for good reason. I’m not ready to believe that they’ve found Kagari just yet. Or rather, even if this new girl is Kagari, it’s a little suspicious that she fell right into their laps as soon as they started looking for her.

— Unfortunately, we have silly New Year’s nonsense at the shrine to deal with, and Nae has even been invited to come along.

— So is this guy still a member of the Rounders in this timeline?

— Even a simple conversation gives Rintaro a PTSD flashback.

— I’m feel a headache coming on.

— Maho is stunned that Rukako is a boy, and all I can think is that this is stupid. This is why I can’t love Steins;Gate. If you remove all the nonsense, the show would probably end up in my top 30 favorite anime series, but yeah…. The episode is more than halfway over, and I feel like we’ve barely gotten any plot. Real plot, mind you. I want intrigue and suspense. I want more time-traveling shenanigans involving shadowy organizations, not this slice-of-life bullshit with wacky visual novel background music.

— Now it’s Maho’s turn to stare at Kagari in disbelief.

— This is true, but Kurisu had a better hairstyle… and a more tasteful bust size. I hate straight bangs.

— Personally, I think the need for closure is a myth, but let’s not get into that debate. I do agree that Rintaro needs to decide whether or not to continue engaging Amadeus. He’s going to have to, anyways. After all, isn’t that the central premise of this spinoff? So in essence, we’re just delaying the inevitable because this Kagari subplot has come out of nowhere. 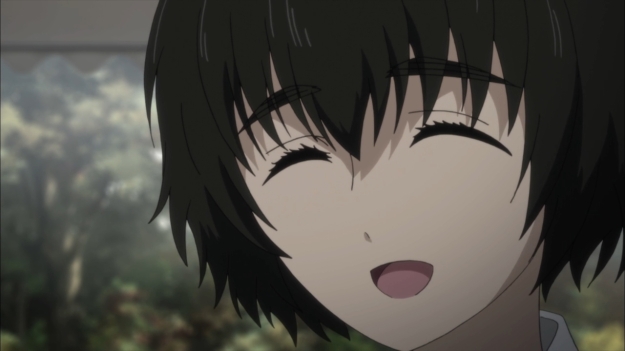 — The episode literally gives us a clip of Mayuri giggling for three or four seconds straight.

— Oh great, these two schmucks are here. Just about five or six minutes left in the episode though (you have to account for the ED), so I’m sure the story’s about to drop some bombshell on us. At the very least, it’s going to try and end on a cliffhanger. Judging by the last few episodes, Steins;Gate 0 appears to be obsessed with this storytelling gimmick.

— Christ, I forgot about the party after the shrine visit.

— But we just had a party… why are you doing this to meeeeee?

— Plus, there hasn’t been any Amadeus in this week’s episode yet.

— Oh no, another shady individual! This is all we get for plot this week, apparently.

— So as soon as you answer the call, Amadeus gets complete access to your phone? But until then, the AI has no clue what your phone is up to?

— Well, the cat’s out of the bag now; the entire party is now gathering around Maho as they express their curiosity in Amadeus. I’m just waiting for someone to remark on her striking resemblance to Kagari.

— This is hilarious. Maho just walks away from the group, leaving Amadeus behind to chat with everyone. Rintaro is thankful, though. After all, he can’t keep hiding everything from his friends. Plus, they won’t mistake Amadeus for Kurisu, so maybe this will help remind him that he’s talking to an AI, not an actual replacement for his lost love.

— The program abruptly closes itself (crashes?) as soon as Amadeus brings up Rintaro. Maho examines the phone, but finds nothing wrong with it. She can’t connect to the server powering the AI, though. All of a sudden, ominous music kicks in, and Mayuri notices that her watch has stopped working as well. Rintaro starts to freak out, and well, you know what time it is! It’s time for our cliffhanger of the week! Masked intruders storm the apartment with guns, and predictably, the episode comes to an end. 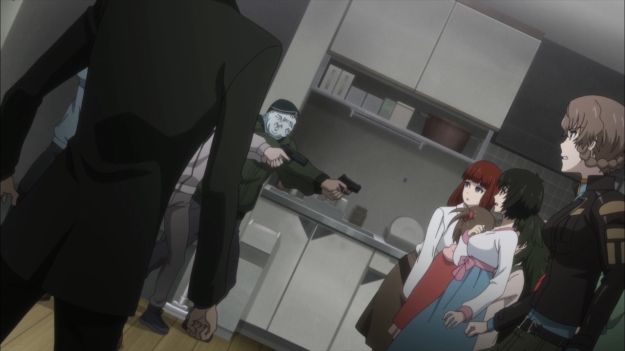 — Other than the last five minutes, this was a boring ass episode. Hopefully, we’ve gotten our need for mind-numbing holiday celebrations out of our system.

— I wonder if Rintaro is instantly going to put Moeka at the top of his list of suspects.