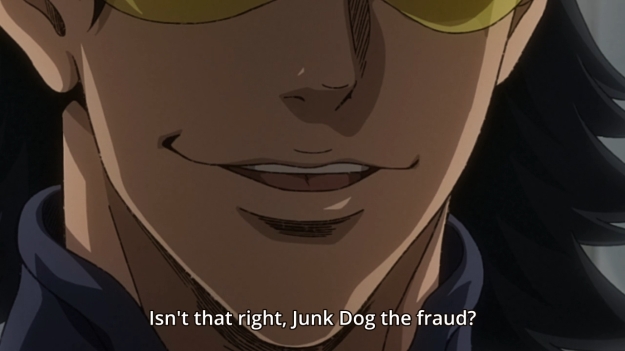 You can’t hide the truth forever.

— That Joe… he’s so hot right now. Babes are even tattooing him on their thighs. Speaking of which, this show has a pretty low female presence. I’m not weighing in on this yet. Not until the end of the series, anyway.

— Look at these two jobbers that we aren’t emotionally invested in. The guy on the right is actually Yukiko’s brother. It has been speculated that the winner between these two will take the final spot in Megalonia, but we all know that this honor is going to go to Joe instead. I’ll admit that the fact that Megalonia is just a 4-man tournament is a little disappointing, but this is only a 1-cour show as far as I know.

— Plus, boxing is a pretty taxing sport. There’s no way an athlete could survive a gauntlet of matches in a short period of time. Joe has to spread his five pre-tournament matches out over the course of three months.

— How convenient: Yukiko and her entourage pass by Nanbu, giving him the chance to promote his guy. She whispers into his ears, however, that fighters are required to have Gears in order to participate in Megalonia. Oh? Since when? Is that in the fine print? Then again, she’s the head honcho, so I guess she can call whatever shots she wants.

— That reminds me: I still want the story to explain why her guy Yuri needs to win Megalonia, but I guess there’s still time to get into that later.

— That’s… not a healthy color for piss. And why is he all chained up?

— We see Mikio face off against Sugar, the world’s fourth-ranked boxer. Yukiko’s brother is making short work of his opponent.

— This is kinda unfair: the AI in Mikio’s Gear “probably determines the most cost-effective attacks and defenses….” Can I really call myself a chess champion if I let a computer tell me what moves to make? Sure, Mikio still has to know his footwork, but this feels like it flies in the face of sportsmanship. But maybe nobody has ever made the distinction between boosting one’s physical prowess and boosting one’s mental prowess. If it’s not in the rule books, then it can’t be against the rules (see: Airbud). Still feels kinda lame, though.

— All of a sudden, Mikio challenges Joe. Yukiko already seems to have something against Joe, so there’s nothing for Mikio to gain. If he beats Joe, he slightly boosts his chances of getting into Megalonia. If he loses, however, he gives our hero the perfect chance to crash the big party. Maybe Mikio knows something we don’t know, because at first glance, he doesn’t stand to gain all that much from fighting Joe.

— Man, that fake ID is gonna come back and bite Joe in the ass. I’m sure of it. The fact that Nanbu is bringing it up now means it’s going to become an important plot point soon.

— Just think about it: if he gets to the finals, all eyes will be on him. Every interested party will start looking into his past. Eventually, someone’s going to dig up the truth, especially if money is on the line.

— Unfortunately, Joe is still pretty damn beat up. It sounds like Nanbu kept him chained down just to prevent the guy from injuring himself even further. Stray dog, indeed.

— Joe’s pretty scrawny for a pro boxer. It’s hard to imagine someone with this frame lasting very long against some of the beefier fighters. There’s a reason why there are weight classes in actual boxing. Skill and technique can’t make up for everything.

— Plus, if Joe is this bruised on the outside, who knows what sort of damage he’s incurred on the inside. Internal bleeding is no joke.

— Every athlete knows they have to let their body recover. It’ll even come back stronger than ever. You literally do need to rest, though. Nanbu seems to have gotten through to Joe for now, but we’ll see.

— Turns out Yukiko helped set up Mikio’s match against Sugar, but she didn’t actually want him to win. She never expected his Gear to be so effective, but he now actually poses a credible threat to Yuri if things continue at this rate. Interesting. I wonder if keeping Mikio out was a way to resolve a potential power struggle between the two siblings.

— Look at all these men trying to push Yukiko around.

— So for the first time ever — and possibly the last time ever — Yukiko will bet on Joe, and hope that our hero can keep her brother out of Megalonia.

— What is Yukiko after? Is she meeting with a military general? How does Yuri’s success at Megalonia figure into all of this?

— If Mikio is cheating, then Yuri is also flirting hard with the boundaries of the sport. He’s willing to become practically half-machine in this quest to win Megalonia. The thing is, he’s already reached the peak of his craft. He’s the top-ranked boxer in the world, so he’s already proven that he can beat everyone else. What is Yuri fighting for? This is one of the major questions to answer as we head into the second half of the series.

— We now have a battle of two extremes: a man who has no Gear goes up against a man who puts everything into his Gear’s hands — even the actual battle strategy.

— Mikio accuses Yukiko of stealing the company from him. Fair enough. But how will he wrest control back from her by winning a boxing tournament? Maybe he’s a genius. Maybe he’s the brains behind his revolutionary Gear, and when he wins, the board members will be so impressed that they vote him in as the company’s next president. Still seems to weird to me, however, that Mikio would put his own body on the line to take this gamble, though. He could’ve recruited any fighter to promote his Gear.

— I guess these kids don’t need drugs anymore. Nevertheless, look at all these people lining up just to watch Joe train.

— Everyone loves an underdog. They also love someone that they can identify with. I harped on Joe’s scrawniness earlier, but at the same time, it plays a big part in his appeal, doesn’t it? Lemme use an analogy from the NBA. Obviously, Lebron is well-loved by most basketball fans but Steph Curry’s meteoric rise isn’t a surprise either. After all, people can picture themselves in Curry’s shoes. He’s also scrawny. He’s tall compared to the average person, but he’s nothing impressive on the court. Nevertheless, he’s one of the best offensive players in the NBA through sheer skill and craftiness. Of course, he’s also very gifted athletically, but not like Lebron. We can thus identify with him much more easily. Lebron, on the other hand, is a physical specimen — an athletic freak, actually. 6’8″, 250 lbs, built like an NFL tight end, and can jump out of the gym? No shit he’s a star, but at the same time, you can’t even pretend to be Lebron when you’re having a pickup game with your buddies. But with Curry, it’s a different story. Same with Joe, too. He gives all the average Joes (pun much intended) out there the ability to dream. They can see themselves succeeding in the ring like Joe, because look at this guy. He’s skinny as hell, and he doesn’t even have any Gear! And yet, he’s winning through skill and grit. So we say to ourselves that we could do that… we could totally do that, too! If only we weren’t so lazy….

— Joe’s team breaks it down for him: since Mikio’s Gear does all the thinking for him, he doesn’t have slow reaction times. Again, this sounds unfair to me, but whatever. It’s also hard to simulate this in practice, because nobody else has Mikio’s Gear but him. At best, you could somehow slow Joe’s reaction times down, so he can at least see what it feels like to go up against someone who has this particular advantage over him.

— Our hero manages to knock Nanbu off of his feet with a single punch. It turns out he’s been taking extra lessons on the side with Sachio. But yeah, I guess that’s going to be the strategy going into the match: wait for Mikio’s Gear to make one small error, then finish the guy with a surprising punch. Since Joe trains out in the open, however, I’m surprised that none of his opponents have sent anyone to scout him out.

— If this Joe also dies, Sachio’s going to have to hope that Nanbu still wants to take him in…

— Well, what do you know? That fake ID business came back to bite Joe in the ass sooner than I expected it to. Mikio stops Joe short from climbing into the ring, then taunts the latter with the truth. What now?

— But maybe Joe has gotten so popular that no one will even cared about his “checkered past.” Maybe it’ll even endear him more to his fans. After all, nobody’s perfect. And in this world full of haves and have-nots, people may feel as though they need to pull a stunt like Joe just to even have the privilege of climbing into the ring.

— Mikio confesses that he never intended to fight Joe. How devious.

— It sounds like a bad idea to lose your cool here. Nanbu, however, prevents Joe from doing anything he might regret.

— The doors close on Team Nowhere, but there’s no way it ends here. Sadly, we don’t get a next episode preview to give us a clue as to what might happen next.

— This show’s soundtrack can be pretty hype.