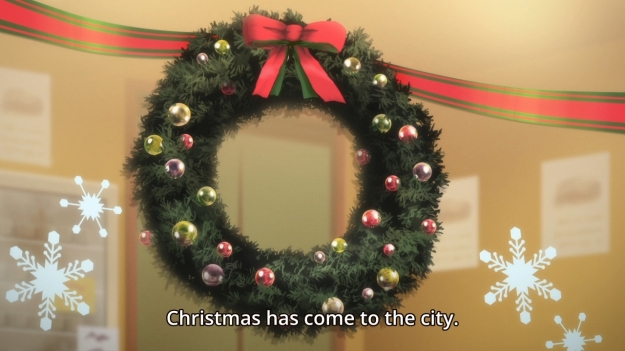 — Ahh, the infamous kabedon. Thanks to Yakuza 6, I now know the actual name to this stupid move. Hirotaka’s execution is a little off, because you’re not supposed to use both arms. Naturally, this is all a ruse by the girls to get their boy love rocks off. They lucked themselves into having hot, tall boyfriends. This probably wouldn’t work out too well for the average otaku.

— Hirotaka misses out on a golden opportunity to capitalize on a generic anime moment with his girlfriend: she forgot to bring her umbrella and it is now raining, but as it turns out, he forgot to bring his too. Whoops. So it’s Taro to the rescue, but he’s still a jerk from what we’ve seen in previous episodes.

— He still casually swaps places with Narumi. Maybe it was to keep her dry, maybe it was to keep his games dry. Maybe both. Either way, she’s impressed, but impressed enough to like him back? Who knows? And yeah, I still don’t feel like she actually likes likes him, y’know? The way their relationship started, I kinda feel like she’s only dating him out of convenience (they work together, hang out together, have the same interests, so on and so forth). He has to gradually make her fall in love with him.

— I actually can’t remember if they’ve kissed. I think they have? I might be wrong, though. I might be mistaking my memories of Taro and Hanako kissing for our main couple. Either way, I’m surprised that the romance in Record of Grancrest War is the one that appears to have gone the furthest out of all the shows that I’m watching this season. Tada still has to admit that he likes Teresa. Hiro and Zero-Two kinda have this weird puppy love for now. Narumi is dating Hirotaka, but only in name…

— Look how nice Hanako is to Taro. Can you believe that he made her cry just two episodes ago?

— As an aside, I used to like rainy days. But now that I have to spend 30 mins every morning walking to my job, no thanks.

— The next morning, Hirotaka notices that Narumi is bummed out, so he asks his friends for advice. Maybe they know what’s wrong with the girl. Unfortunately, she doesn’t look any different to either Hanako and Taro, so they’re no help. I guess Hirotaka must really understand his girlfriend, ’cause she sure as hell doesn’t look sad.

— It’s apparently weird for the girl not to tweet something every hour. Sadly, I know some people like that….

— Hirotaka tries to invite Narumi out later that night, but she’s very hesitant. Knowing this show, though, what’s troubling Narumi is probably something stupid, i.e. something related to her otaku interests. Nevertheless, she keeps insisting that everything is fine. She, however, accidentally lets it slip that it has nothing to do with Hirotaka. So something is bothering her. Man, I can really feel the love from here. If you can’t depend on your boyfriend for emotional support, then why even have one? Man or woman, we always want to feel as though we’re needed. When our SOs try to shoulder their own burdens by themselves, it doesn’t make us feel any better. For an adult, she has a lot to learn about adult relationships.

— Eventually, the truth comes out: Narumi is sad because of something stupid. Welp.

— I actually don’t know what their job is.

— We get another reminder that Taro is a terrible boyfriend. Nevertheless, Hanako forces herself to wear a smile. That’s pretty pathetic. Meanwhile, Narumi has no clue if she’s doing anything with Hirotaka for Christmas.

— This must be such a cheap anime to make. They’ve been waiting for that elevator for minutes. Most scenes simply come down to two characters standing or sitting still in one location and having a conversation.

— I was never told that Santa was real.

— Surely, Hirotaka won’t allow this golden opportunity to pass him by. Just give the girl what she wants. This reminds me of all those guys patting themselves on the back, because they think they’ve solved some big gift-giving mystery by just checking their spouses’ Pinterest accounts.

— They run across Nao giving out free samples of coffee in a Santa suit. I have to imagine that the drinks would go cold real fast.

— Why did Hirotaka pinch his brother’s face when they were children? ‘Cause it’s a Mario 64 reference! Ho ho ho, aren’t gaming references so funny?

— This conversation is so boring. They were talking about how cold it is, and now it’s all about how Nao doesn’t have a girlfriend. Who cares? Nevertheless, Hirotaka makes yet another gaming analogy. I can’t believe Wotakoi got this time slot. It’s such an aimless show with half-assed jokes. It’s not even all that well-directed or animated. Just comparing everything to games doesn’t make something funny.

— If Nao can’t get a girlfriend, it just means he hasn’t put himself out there enough. Either that or he’s actually a shit person behind closed doors. Shrug.

— Or maybe he’s just corny as shit, so you can’t stand being around him for more than a day or two.

— Later that night, we see Hanako trying to leave the office alone, because it looks like Taro will be working late again. But it turns out he actually made dinner reservations at a swanky place overlooking the city. Eh.

— You can make reservations six months in advance?! In what universe?!

— Try not opening that present in public, man. I kid, I kid… maybe. But at least they’re both genuinely happy. Still, that episode was kinda boring.

— And it looks like these two are having the time of their lives too. We’re just missing a cake.