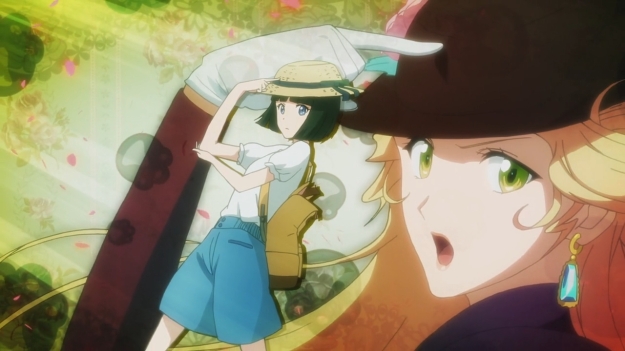 In this week’s episode, Yui gets to channel her favorite French detective as she and the rest of the gang go on a search for a missing cat. Her missing cat, in fact.

— Poiron? The Sunflower Express? Gosh, whatever could this anime be referring to? By the way, did I mention that I didn’t like the latest adaptation of Murder on the Orient Express? I expected more from Branagh.

— Afterwards, we randomly cut to Charles jogging through a nearby park. He seems to have come across something important… something short… perhaps even on the ground level. It’s probably the damn cat.

— In the morning, we see Yui freaking out over the fact that Nyanko Big has returned home. Even stranger is that he hasn’t eaten any of his food. If you’ve been following the show week in and week out, then you know that the cat is too chubby to ignore his food bowl. Something must be up.

— Speaking of which, my cat would never drink from that water bowl. She refuses to drink any water that is near her food. She prefers it if you fill up a red plastic cup and place it on a table somewhere for her to drink from.

— Apparently, Nyanko Big’s “girlfriend” is this chewed-up toy. No wonder he’s trying to upgrade to Cherry.

— Sure, cats do this, but Nyanko Big’s a bit too young to die.

— In any case, it’s up to the gang to find a cat even though it’s only been missing for a single night. This seems like an overreaction to me, but what can you do when an imouto is crying?

— I would never even dream of sticking my cat in a bag unless I want to give myself permanent scars.

— Teresa’s heart seems to skip a beat whenever she sees Tada. Does he feel the same way? Maybe, maybe not. But after seven episodes, his character development is way too slow for my liking. He’s flat-out boring. For a romantic lead, he has damn near no personality whatsoever. Granted, he’s surrounded by a cast full of huge personalities, but it’s actually remarkable how utterly lacking Tada appears to be in this regard. All we know is that he’s stoic and likes to take pictures. Yawn. 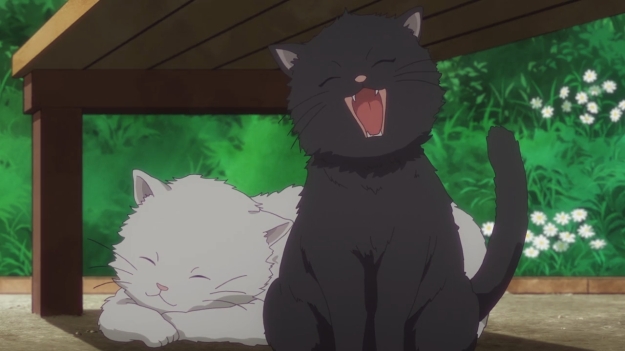 — Even though a cat going missing for one night is really no big deal, Teresa’s fretting results in both herself and Alec lending a hand as well. I’m still pretty sure Charles had seen the cat, so if someone could just give him a call….

— The only people not here are Pin-senpai and his beloved HINA. Apparently, they’re shopping for his new clothes. Why? Remember when he wore that trashy outfit in public a few episodes ago? It wasn’t not a particularly funny joke, but I do like the callback in this week’s episode.

— Oh yeah, Yui likes Dog-kun. I had completely forgotten all about that. But she’s, like, half as tall as him.

— Luckily for the girl, she ends up with Dog-kun when the group decides to split up to cover more ground. We learned in a previous episode, however, that the guy is in love with an older person. As a result, I don’t think this is going to turn out well for Yui.

— Kaoru asks around about Nyanko Big, but the only pictures he has of the cat are also pictures of, well, him. To my great surprise, however, the guy is really popular with the ladies. So why doesn’t have a girlfriend yet?

— As for Teresa… well… she’s doing her best, okay?

— Well, what do you know? Charles did meet up with Nyanko Big last night. In fact, the dumb cat had fallen into a shallow stream, so he had to go and help the animal out. He’s such a nice guy. You know, you expect there to be a good guy and a bad guy in most of these stories, but Charles is hardly the bad guy. His only fault is that he’s in love with someone who isn’t enthusiastic about him. Other than that, however, he has Tada beaten on every front. Still, the heart wants what it wants. You can’t force love, and if Teresa doesn’t feel a connection with Charles, so be it. I mean, shit, they’re kids. Let’s not take relationships at this age seriously. This sounds depressing, but it’s also realistic: most people do not end up with the person that they dated in their teens. Either Tada and Charles will experience a heartbreak by the end of this series (or maybe both), but the pain will be minor. There are plenty of wonderful women out there. 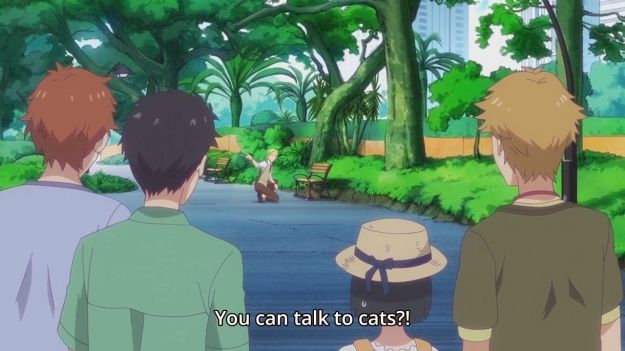 — Oh come on… Charles can talk to cats? What is he? A Disney princess?

— Eventually, the whole gang finds Nyanko Big just chilling out on top of a flower shop.

— Okay, I legitimately laughed out loud at this.

— Opposite the fat cat is none other than the prissy-looking Cherry-chan. She seems like she couldn’t care less for Nyanko Big.

— Nevertheless, you just gotta take a leap of faith sometimes. You never know where it might take you.

— Ah, so this is the older woman that Dog-kun is in love with. RIP Yui’s feelings.

— I know that look. That’s the look of acknowledgement… acknowledging that one’s love will forever remain unrequited. I’ve been there before.

— Afterwards, Charles has a short conversation with Tada and Kaoru about love. Needless to say, our hero doesn’t really have much to say. He continues to be such a blank slate even though we’re now more than halfway through this one-cour series. As for Charles, he sounds like he’s read ahead in the script.

— Later that night, Tada enters the coffee shop first, leaving Yui behind with Teresa and Alec. The little sister breaks down and cries. I’m actually a little ticked off that her own brother wasn’t even there to comfort her. Sure, Teresa is there to help out, but this guy just has so little presence. He hasn’t done anything wrong. That’s the amazing part. Tada is perfectly normal… and perfectly boring as well. He’s like the most unprotagonist-like protagonist ever. He’s the generic tall guy with black hair who always gets to be the lead character, and on some meta level, it’s almost as if he’s taking this blessing for granted.

— In the after credits scene, we learn that it was indeed Teresa who had something to do with Charles’ precious bracelet. In fact, he’s been in love with her ever since. Yeesh. 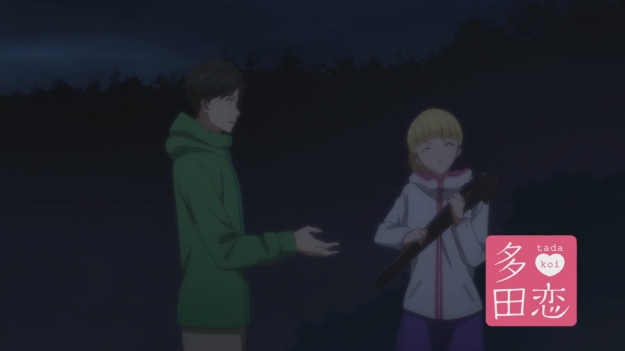 — The previews for next week’s episode seem to imply some more alone time for the canon couple. Let’s hope Tada finally decides to come out of his shell. Also, it looks like Charles might run into a few emotional obstacles of his own as well. Love has no reason to be fair.

— Cute episode. Far better than what Wotakoi had to offer… but I’m really losing my patience with Tada. Luckily, his friends and sister are around to keep this ship afloat.