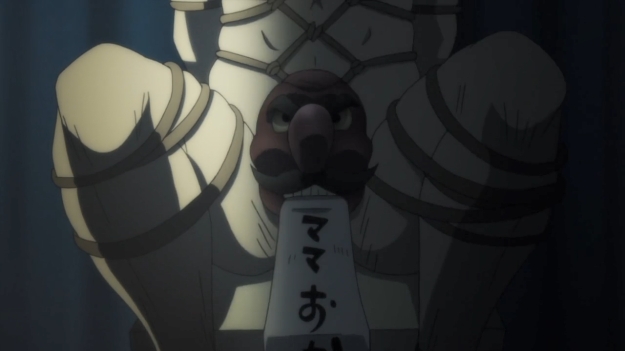 I think I’m about ready to drop this show from my weekly rotation, but let’s see how this week’s episode goes.

— Now that I think about it, the fact that her dog lost to Yuuga hardly even matters. Couldn’t she just tell her pet to then lose to her in a duel? Slaves have been stolen back and forth in this fashion all series long, so it hardly even matters that the dog became Yuuga’s slave.

— Oh my god, they’re giving the dog a human voice. Animals are cute precisely because they aren’t human, you guys. It’s not complicated. I don’t want my cat having the same internal voice as Nyanko Big, and likewise, I wouldn’t want my pet dog to sound like such a generic dork.

— I guess we now get to learn how he got his stupid doggy SCM.

— You got to be kidding me. The dog ran away from home because it fell in love. Christ.

— The dog owes the man for saving his life? His life? All I saw was an injured leg! One injured leg.

— And why would a super-important research depend on a random pet that just showed up out of nowhere?

— Apparently, the professor created the SCM device simply to control pets. Naturally, its functionality has since been extended to apply to humans as well. Hey, we’re all mammals, so I suppose this wouldn’t be too much of a stretch considering all the other nonsense we’ve been dealing with. Nevertheless, for something this outrageously powerful to exist — you can turn other living beings into your slave! — you’d think it’d be a tad difficult to break into the lab and steal the research data!

— So the professor eventually left the university in shame and still didn’t bother to return the dog to its original owner. Amazing. 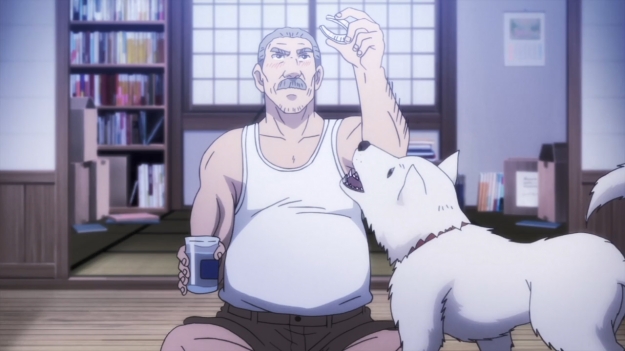 — Also, no one bothered to alert the authorities that the blueprints to a device that can create slaves had been stolen! I guess this could’ve created a huge scandal for everyone involved (including the university), but I can’t believe that not a single researcher on the professor’s team had the moral fiber to realize how dangerous the SCM could be if it ever got into the public’s hands. Stunning.

— The dog thought that he could use the SCM device to find the data thief, get the data back, and make the shitty professor happy again. Amazing. What an amazing plot.

— But it was too late! The professor eventually committed suicide!

— In any case, we just got the dog’s backstory. At first, the dog seemed like a hero when it first showed up back in the third episode and saved Shiori. But after last week’s stupid shenanigans and now this, I’m done with the dog as well. It sucks too. There isn’t a single likable character on this show.

— If you’re smart enough to ask this, why did you accept the stupid ass challenge from Yu-… forget it. It’s just a dumb dog.

— Now that we’re done with the dog, we next see a redhead walk up to Yuuga and stab him in the butt. Like right into his asshole, too. Nice. She is our self-proclaimed “Crazy Person.” This show just keeps getting better and better.

— Needless to say, Yuuga allows the woman to dictate the terms of the duel. Not only that, she has goons to overpower the idiot.

— Oh, she was wearing a wig. She can’t even be a hot redhead. In any case, the woman introduces herself as Fujiko, and she’s already collected herself a nice collection of slaves. I can recognize their faces, but other than Ayaka, I’ve already forgotten their names.

— Fujiko claims that she’s looking for a certain someone. Apparently, this Shinnosuke person had saved her from being harassed one night, and after partying with him, she’s been obsessed with him ever since. Unfortunately, she was just a one night stand to the guy. Yeah, it’s not the most compelling backstory. In fact, none of these characters are interesting. They’re just c-c-c-crazy! The end result, however, is that they all end up being super boring, because they’re not doing anything remotely thought-provoking or even astoundingly offensive with their ability to turn people into slaves. It’s all just a bunch of juvenile shit. Yuuga wants excitement. Fujiko wants a certain man. The trap wanted Shiori to become his master. So on and so forth. Ayaka wanted Seiya to love her. It’s all so fucking pedestrian for a show all about BDSM and sadomasochism. 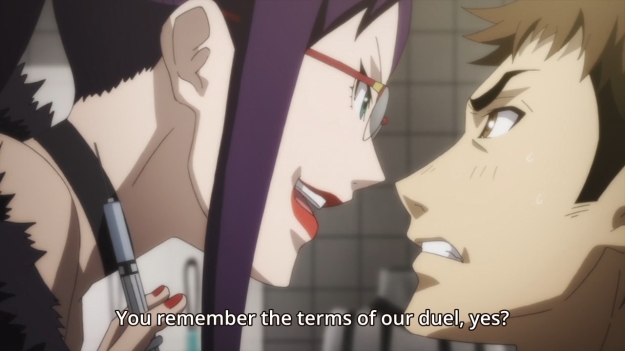 — This is honestly one of anime’s biggest weaknesses. The medium has the ability to explore darker, more adult topics, but at the same time, the writers are either gutless or lacking in imagination. As a result, the most extreme shit we’ve gotten was… what? The rape in episode one? Ayaka forcing Seiya to go down on her? Like shit, this is some teenager shit. Duh if I had slaves, I’d make them pleasure me! How dull.

— The anime wants you to think that we’re truly dealing with a bunch of psychos, but I don’t think the writer has ever met a deranged person.

— Plus, the show could’ve at least been somewhat novel if the duels were any good — if the duels actually required an ounce of brainpower. But no, everyone just cheats. Yuuga loses to Fujiko if he sees his mother before she sees hers. But of course, he’s tied up in his room, unable to escape as his mother goes to check up on him.

— When Yuuga shows up at the designated location to try and trap Eia as he is commanded to do, a masked individual suddenly appears behind the guy and forces him into yet another duel. It’s just non-stop coercive duels! If you have firepower, you basically win. Just carry heat everywhere you go! Bang, bang, lose to me!

— The idiot goes with paper and instantly loses. Amazing. This is the same chucklefuck that wanted to test his limits at the start of the series. His greatest claim to fame thus far, however, is forcing a poor hostess to eat a fork.

— The masked individual then reveals themselves to be none other than Eia. Welp. I guess he’s free from Fujiko for now…. what a lucky bastard. He didn’t even have to suffer being Fujiko’s slave for a whole episode.

— Eia didn’t have to save him, but a promise is a promise! Lame.

— Since the dog was Yuuga’s slave, and the guy went and lost to Fujiko, does that mean that the dog is now Fujiko’s slave? I would have to think so, right? Unless Eia dueled her own pet offscreen or something. So even though Eia might have stolen Yuuga away from Fujiko, she still has to contend with the fact that her dog is still enslaved, right? That’s what I’d like to think. But Yuuga asks the girl if she’s going to walk away, so it sounds like she has the perfect ability to just up and leave right here and right now. That makes me think that the dog is also free from enslavement but… ah fuck it. Fuck this show. 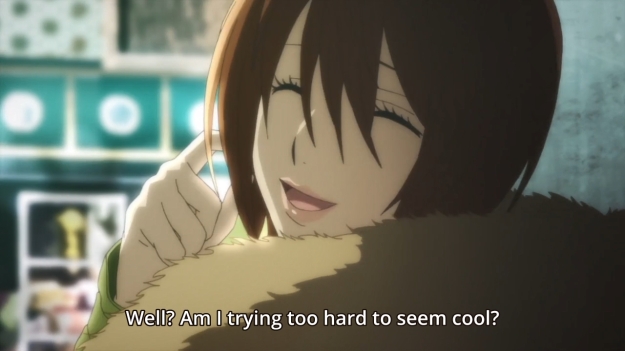 — Eia also wants to keep playing as she claims that she now wants slaves. She’s not evil, though. Rather, she wants to be the hero. She wants to free every single person from enslavement. That’s commendable of her, I guess. Kinda weird that it took seven episodes for any sort of moral goodness to emerge from any of these characters. Just listen to that generic inspiring track in the background, though.

— Y’know, a lawful aligned bastard would just force everyone in the world to wear an SCM, then command them to be nice to each other. Clearly, however, I’ve been playing too much Shin Megami Tensei.

— At the end of the day, we still get the same ol’ trope about how scientists are irresponsible idiots.