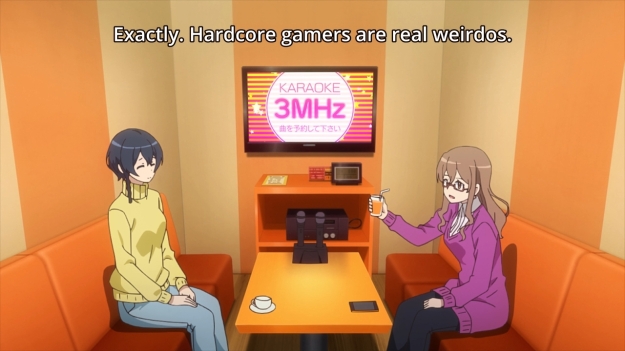 — I’m gonna be level with you guys: after DARLING in the FRANXX, Persona 5 The Animation, and My Hero Academia, I’m way too tired to take a serious look at this show. As a result, this post might end up being a little… janky.

— I also want to wrap things up quickly so I can get back to playing Strange Journey Redux.

— The episode opens with Karen buying herself a brand new P-chan. Apparently, it’s a rare gun. How strange. I would’ve thought that something like P-chan would be commonplace in a game like GGO.

— Afterwards, we return to the ending of the very first episode. If you recall, a bunch of girls had come over to Karen’s house to watch a replay of the last Squad Jam. In fact, these girls were the very same opponents that Karen had to defeat in order to win the whole tournament. What a coincidence.

— Isn’t your avatar’s appearance completely determined by chance? So you also want me to believe that these six girls from the same high school gymnastics team managed to roll six female avatars in GGO? Really? Reeeeeeally?

— Apparently, they used to suck as a team in real life, so these girls all joined GGO in order to fix that problem. Man, video games are truly the solution to everything! I’ve always wanted to be a lawyer, and thanks to Ace Attorney, I am now qualified to represent the President of the United States!

— Afterwards, Karen hangs out with her old friend Miyu. It’s like a victory parade for our heroine. It’s one kudos after another. Odd how nobody seems to care about my last Fortnite victory.

— Zekken? Where have I heard that name before…? Oooooh, you mean that girl. Oh, I wouldn’t feel too bad, Miyu. At least you’re not dead.

— So there’s going to be a Squad Jam 2, and those high school girls are eager to sign up for it. Since they finished second, they’ll even be seeded for the upcoming tournament. Karen insists, however, that she’s going to sit this one out. Yeah… right.

— Sure enough, someone shows up to convince Karen that participating in a fucking video game tournament is a matter of life and death.

— Needless to say, M is even weirder in real life than he is in the game.

— He continues to claim that the real life Pito is a real nutso. She apparently has this strange obsession with death, and because she missed out on being stuck in SAO, she’s been in despair ever since. What kinda bothers me is how she claims she would’ve been one of the player-killers had she managed to get herself stuck in that damn game. If that’s truly the case, this girl isn’t just nutso. She needs to be locked up.

— It’s so obvious that Pito and Elsa are one and the same.

— Karen offers up the commonsensical solution, but we’re in an anime, so get that shit outta here!

— Hm, it’s kinda hard to kabedon a taller person. But to be fair, she’s not that much taller than him.

— First kabedon? Are girls supposed to get multiple kabedons in their lives? Shit, I need to start kabedonning my crush at work.

— So why does M tolerate Pito’s bullshit? First, he’s obsessed with the girl. Second, he’s also a complete nutjob himself.

— At this point, it’s obvious what Karen must do. The only solution to this Pito problem is to have Karen join the next Squad Jam 2 and defeat both the girl and M. Why? ‘Cause she made a promise with her online buddy, yo! A promise between onnas!

— Not only did they make a promise, they banged their guns! Dude, that makes it extra special.

— Any normal person would just call Pito’s bluff. Oh, she’s gonna kill herself if she loses? Shrug, whatever. I bet she won’t. Even if you really believe that she would do it, you would do what Karen suggested first and call the police. You’d tell them that the so-and-so is potentially suicidal, and let them take care of it. If you ever try to break up with someone, and they claim that they’ll hurt themselves, now you know what to do. But again, we’re in an anime, so… yeah…

— In the end, Karen agrees to take Pito and M down. After all, if she didn’t, we’d be out of an oh-so-wonderful SAO spinoff. If that had happened, what would we watch between now and the actual SAO sequel?!

— Obviously, Karen can’t do this alone, so she needs a friend. Those high school girls already have a full team, so she only has one person to turn to.

— Why she gotta be naked though?

— But hey, this write-up was relatively painless. I now get to sit back, eat my cheesecake, and watch as everyone tells me how wrong I am about all of the shows I’ve written about today.