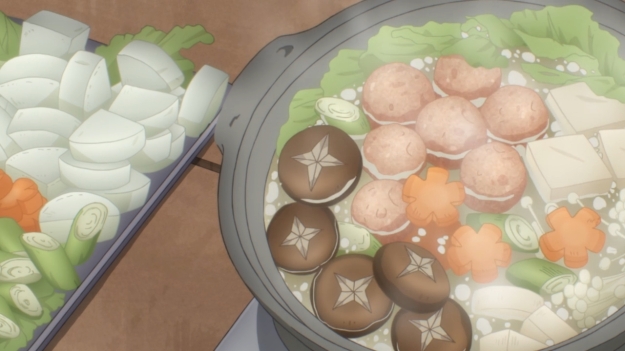 Last week’s action-packed episode must have really put a strain on Satelight’s budget, because half of this week’s episode is all about a goddamn hotpot. Lest you think I’m joking, read on.

— An entire month has passed since we last spent time with Ritsu and his gang. Apparently, has been sleeping ever since she went nuts on the city. As a result, everyone has just been biding their time. Kotaro has side missions to keep himself entertained, but I have no clue what everyone else has been doing to keep themselves busy. Apparently, Shogo has a part-time job, but I’m having a hard time understanding the point of having a job in this fake universe.

— Also, the city still hasn’t recovered from Mu’s destruction. Since she’s sleeping, the NPCs have to do all of the work, and they work about as fast as you can reasonably expect them to.

— Speaking of Kotaro’s side missions, he’s been masquerading as Rescue Man. He’s supposed to be enjoying this hot pot with the rest of his friends, but duty calls. People can make odd requests on the internet, and before they know it, Rescue Man will be there for the, uh, rescue. There are no exceptions! Even if you’re just an NPC, you too will be helped!

— I do like the fact that Shogo openly drinks beer in the clubroom. After all, he’s an adult in the real world, right?

— We get brief glimpses of the Musicians every now and then, but they never have much to add. They’re also sitting around, but instead of indulging in hot pot, they just gripe about the good guys. Thorn will eventually show up and tell everyone that Mu will be just fine. As a result, they’ll soon have business to take care of later. Cool, I guess? But right now, it’s still all about that damn hot pot.

— By the way, I know nothing about Izuru. He just kinda showed up one day, and now he’s an official member of the group. The game probably needs two seasons worth of episodes to properly tell its story, but it only had the budget for one.

— Also, Marie drops by the club often even though she’s not “woke.” She’s not even a member of the club. She just drops by because… well, the characters seem to hint at the fact that she likes Ritsu. We did see him instinctively try and rescue her in the very first episode. He also invited her out to the water park. I guess she plays the role of the girl who has the unrequited love for the main character. This seems to be a thing now in JRPGs. Tokyo Xanadu is no different. The childhood friend pretty much loves Kou, a.k.a. Tokyo Xanadu’s main character, but like Japanese heroes, he’s a dense asshole. But back to Marie, she never sticks around long, especially if Ritsu’s not there. We live in the age of smartphones, though. If she wants to meet up with him, why not just ask him whether or not he’s going to be at the club? Nah, that would make too much sense.

— I thought that Naruko would finally have something important to tell us, but no, they simply bought meat for the hot pot. Sigh.

— We’re still talking about food, by the way.

— Shogo tries to break up the hot pot circlejerk to talk about all-important plot information, but no, we can’t have that. Our attention boomerangs right back to the hot pot when Aria freaks out at Suzuna dumping udon noodles into the simmering pot. Sigh.

— Finally, after the episode is half over, we pay Ritsu a visit in bizarro land.

— Eventually, he sinks into a body of water, then finds himself back at his original starting point. Mu walks up to him, and they engage in a conversation but not really. He doesn’t quite understand her, and she definitely doesn’t understand him.

— Again, Mu wants to make everyone happy, but she doesn’t even understand what happiness is. Ritsu tries to explain it to her, but he uses somewhat big words. He doesn’t realize that he has to dumb things down for her.

— What I find more perplexing is the fact that these two are conversing as if they know each other well. But from my perspective — the perspective of watching this shoddy adaptation — I don’t think they’ve ever formally introduced themselves to each other. Nevertheless, she’s trying to ask him for advice.

— Happiness is happiness, right? Yes and no? But then again, what if Mu had just taken a simpler approach? What if she just blasted their brains with dopamine, oxytocin, serotonin, and endorphins?

— Plus, this shared dream doesn’t like a good idea at all. She wants to make everyone happy, but why do they have to be happy together? Because she insists on everyone being happy together, compromises need to be made. So no matter what age or sex you are, you ending being a stupid high school student. Obviously, however — obvious to us, but not to Mu — everyone has different ideas of what would make them happy. Maybe someone’s idea of happiness is reliving their high school days over and over. But personally speaking, I’d probably be happiest pretending to be a space explorer, blasting off from one alien planet to the next. Maybe Mu’s grip on these individuals wouldn’t be so tenuous had she crafted individual false realities for each and every single one of them. Then again, I’ve been told that she’s both dumb and being misled so… yeah, whatever.

— Meanwhile, midway through this fruitless conversation with Mu, Ritsu suddenly have visions of his real world counterpart. It’s all kinda vague, but my theory for now is that maybe he’s responsible for this world. Maybe he’s even responsible for Mu. Eh, I dunno… something about his real world counterpart claiming that happiness is just a state of mind just makes me think that maybe this is all his fault.

— Eventually, Ritsu comes to a realization, but he won’t tell us what said realization is. He wants to talk to Mu about it first. Unfortunately, she’s already come to the conclusion that she just needs to double her efforts. Welp.

— Mu eventually wakes up with Thorn right beside her. The latter tells the idol that people just need to hear more of her crappy J-pop songs. That doesn’t make me happy at all.

— After Thorn leaves, Mu finds herself oddly in tears. Uh oh, looks like someone isn’t happy!

— Anyways, Ritsu finally returns to the club and guess what? He’s bought more ingredients for the hot pot. Ah, for fuck’s sake…

— Wait a minute? When the hell did this guy defect to the Go-Home Club? This adaptation, man.

— Kotaro suddenly bursts into the room and tells everyone that something bad is gonna happen. On that cue, Ritsu tells his friends that it’s time for them to stop stuffing themselves silly with food and finally do something. After all, we really only have five episodes left. Shoddy adaptation or not, Caligula must have been a short JRPG.

— I hear the PS4 remaster adds a lot of extra content, but this also seems to be another trend lately. A lot of mediocre Vita JRPGs are getting ported to the PS4 with extra content, but I’m not sure if that justifies buying the game again at the same price.