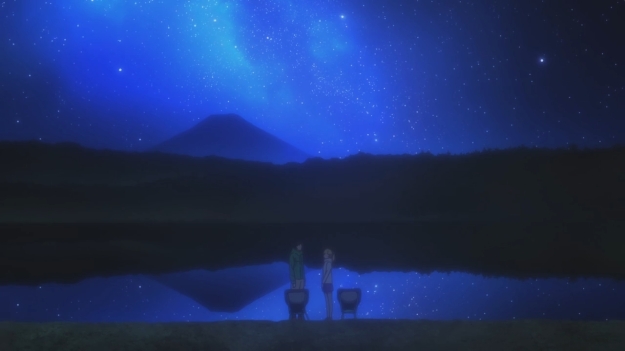 This is it, boys.

— We’re going camping this week, because they want to take pictures of a clear, night sky. And something, something, naked woman. Honestly, Pin-senpai doesn’t even feel like a real person anymore. I hate to admit it, but even Dog-kun has surpassed him.

— Unfortunately, it’s currently cloudy out, so the kids are worried that the weather won’t clear up when nighttime rolls around. But look on the bright side: every time it rains, Mitsuyoshi always gets to share a tender moment with Teresa.

— Alec, of course, continues to be worried. She’s watching her best friend like a hawk. After all, she’s got this fixation with keeping Teresa on track to become the future queen of Larsenberg. Like an overprotective parent, she thinks she knows what’s best for Teresa.

— On the other hand, Charles is torn. He loves Teresa, because she’s such a free spirit. But if she’s forced to marry him not out of love but out of duty, then a small part of her will die. So he has a difficult choice to make: does he let her go or does he marry a lesser version of her? I think if he truly loves her, he has to let her go. And by all indications, he is a good person. This is not a show that has a standard villain.

— Meanwhile, Kaoru keeps trying to flirt with Alec, but he’s nothing more than comic relief.

— Teresa is rather lucky with her love fortune.

— As for Alec? Not so much… but I mean, who really believes in this mumbo-jumbo anyways?

— As soon as I saw this, I knew it had to be Teresa behind the camera. Who else would take pictures of rocks? She probably thinks she sees a bird on it. 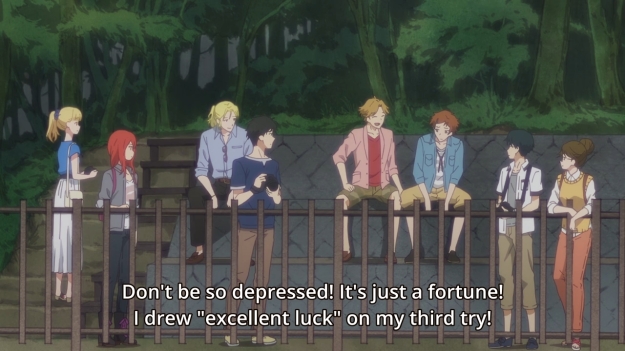 — Despite all of his flaws, I do like Kaoru’s attitude. The smart ones make their own luck. I’m not superstitious, but I am a little stitious.

— God, I’m starting to despise Pin-senpai. I think what’s even more pathetic is that love for him is a sure thing. Mitsuyoshi and Teresa? The jury’s still out. Charles and Alec? Probably not gonna happen. Dog-kun and his nee-san? Outlook looks even worse. Meanwhile, Pin-senpai’s childhood friend is head-over-heels in love with him, and he’s just too dumb to notice her. She would have to dress out of comfort zone just get his attention.

— Unfortunately, Charles crushes Mitsuyoshi. Unfortunately for Charles, that is. It’s dramatic irony. By all traditional standards, Charles should win this contest easily. He’s royalty himself, probably already successful at whatever work he’s doing, an insanely nice guy, can speak to animals, play ping pong, so on and so forth… but Mitsuyoshi is still going to annihilate the guy when it comes to winning Teresa’s heart.

— Sure, Alec is in love with Charles, but at the same time, do we really want her to be a consolation prize? Doesn’t she deserve better than that?

— Of course, Teresa gets to watch this whole interaction play out, but it’s not as if any of this is new to her. She already knows how Alec feels about Charles, and yet, she agrees to marry the guy just because she’s convinced that this would make her best friend happy.

— Alec can be such a killjoy sometimes. Could you imagine trying to exchange vows with her at the altar? You tell her that you’ll love her forever, but she instantly reminds you about the whole “til death do us part” nonsense.

— As for Teresa, any reminder that she has to leave by the end of the year only seems to push the girl even closer to Mitsuyoshi’s emotionless backside. God, look at that man’s broad shoulders devoid of any joy!

— Unfortunately, Charles couldn’t join these kids tonight, because business calls. That’s another thing he has to consider: even if he does marry Teresa, can he really keep her happy if he’s going to be so fixated by his job? And since he can’t be with her tonight, Mitsuyoshi gets to monopolize all of the girl’s attention.

— And Alec continues to stare with torn feelings… 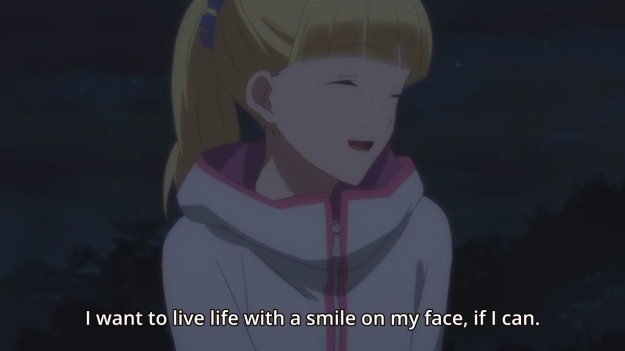 — What a typical genki girl response.

— Alec thinks she’s making a good point, but a lot of smiles out there are forced. And I would argue that nothing feels worse than being a phony. The dissonance will drive you mad. My point is, Alec has to understand that Teresa isn’t always smiling because she feels like it.

— Natural water…? God, I should hope so.

— Later that night, everyone has gone to bed except for these two. As a result, they get to share another tender moment.

— Teresa wonders why he works so hard, but it’s obvious, isn’t it? He feels guilty about being such a brat to his parents the last time he saw them. Mitsuyoshi confesses that he’s been trying to mature as quickly as possible ever since his parents died. I would argue, however, that what he’s actually doing is distract himself. He’s trying to keep himself busy so that he never gets the chance to face judgment from his biggest critic: himself. Mitsuyoshi thinks that by throwing away his childhood, he’s atoning for his greatest transgression, but he’s really just running away from the problem.

— Here’s where the anime almost loses me. The idea here is that Mitsuyoshi and Teresa are kinda like kindred spirits. He understands her, and she understands him. She’s actually shocked that he understands her so well. They both have serious regrets stemming from incidents in their pasts. They both feel that they need to grow up. But Mitsuyoshi is the way that he is because his parents died. On the other hand, Teresa made… Alec cry when they were seven? I mean, c’mon…

— I get that Teresa endangered herself over a stupid flower wreath, but c’mon, these two events aren’t even remotely within the same ballpark.

— Oh yeah, Alec isn’t asleep. Remember, she’s super overprotective of Teresa, so she probably wanted to see for herself what was going on between her best friend and Mitsuyoshi. After all, the last two times our canon couple shared their dokidoki moments, Alec was nowhere to be found. She’s always sensed that Teresa has feelings for the guy, but she’s never been able to understand why. Needless to say, she now has front-row seats. She also gets to hear how Teresa is sacrificing her own happiness for her best friend. Boy, that couldn’t have been easy to hear. 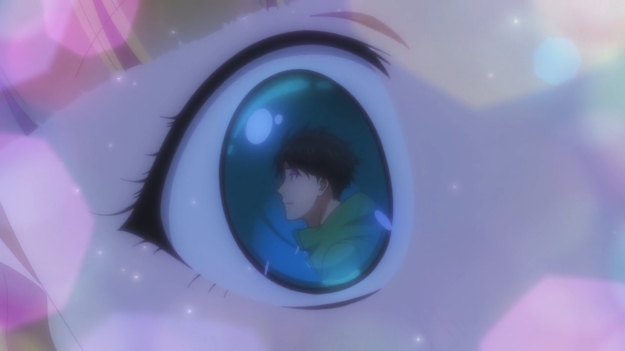 — Teresa wishes she could go back in time and change the past. Mitsuyoshi replies that this is impossible. All they can do is hope that they never make the same mistake again: “I think that’s what it means to regret.” All of a sudden, this romantic piano track kicks in, and all she can see in her eyes is Mitsuyoshi. This is it. This is the moment in which she definitively falls in love with him. He understands how she feels, and doesn’t ask her to be anything but herself. Everyone else wants her to be queenly, and always be mindful of her future obligations. With him, none of this matters, because he doesn’t even know she’s royalty. As a result, his empathy is genuine.

— All of that makes sense on paper, but boy, I still think it happened kinda quick. While watching the episode, I was like… that’s it? That’s why she falls in love with him? But I guess I have to remember that she’s been kinda drifting towards him all series long, and this private moment between them is just what finally pushes Teresa over the edge.

— But of course, none of this matters if she still thinks she has to fulfill her duty to Alec. Not to country, mind you. After all, I’m not remotely convinced that a princess like Teresa can’t marry a commoner in 2018. If she tries to run away from her feelings for Mitsuyoshi, it’s not for her country. It’s for Alec.

— Insert your DARLING in the FRANXX jokes here.

— Still, the girl can’t keep her eyes off of the main character.

— And it looks like her chest even tightens up when she thinks about him.

— And Alec continues to watch… the hamster wheel in her head is spinning. There’s no doubt about that. But despite the intellectual airs that she puts on, Alec is taking her sweet time with the realization that she can’t keep Teresa all locked up in a birdcage.

— Luckily for Teresa, Mitsuyoshi voluntarily snaps a picture of her. In the past, she would always have to wander mindlessly into the frame, but not now. He’s not in love with her yet, but I guess we’re supposed to be happy that she’s now on his radar? 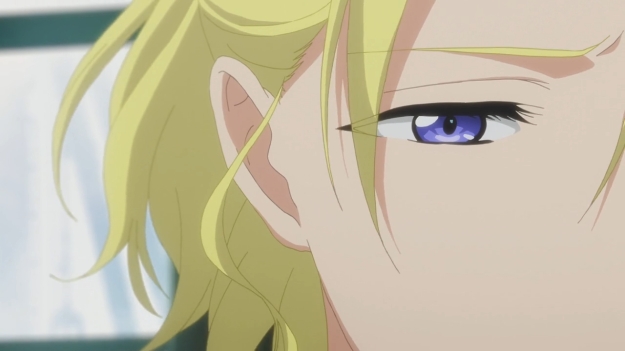 — Charles has to cut his trip short, and in front of Alec, he puts on a confident act. But as he leaves, it’s blatantly obvious that his heart is torn as well. She doesn’t love him, and he knows that.

— And right before the credits roll, Alec tells Teresa that she has something to talk about. Time for the long-awaited and difficult conversation. Dun dun dun…

— I’m still not sold on Mitsuyoshi. Sure, he has reasons to be the way that he is, but he’s still uninspiring as a lead.

— Anime loves camping these days. At least this isn’t a beach episode, I guess.