What a gut punch for an ending. We knew best girl wouldn’t be around to stay, but did they have to make her departure so bittersweet? But I get it now; I finally understand the story that Steins;Gate 0 is trying to tell. It’s just… weird. And honestly, I’m not sure if I’m completely onboard with this series’ existence despite everything. But let’s start from the beginning. After last week’s episode, Rintaro ends up in an alpha world line in which he had never sacrificed Kurisu for Mayuri. Think back to episode 22 of the original series. Rintaro didn’t want to return to a beta world line, because this meant Kurisu would have to die. He had to sacrifice either Mayuri or Kurisu. In the end, she convinced him to save Mayuri, and he confessed his love to her. They shared a kiss, then lots of emotional stuff followed. The next day, as soon as he pressed the button that would shift him back to a beta world line, Kurisu burst into the room to return his confession. She also loved him. Unfortunately, she was too late. Well, what if she wasn’t too late? This episode seems to explore that possibility, and the sad truth is that reality is grim for Rintaro no matter who he chooses to sacrifice.

Kurisu tells Rintaro that she’s surprised to see him back at the lab. Ever since Mayuri died, he hasn’t been back. Sounds familiar, right? When he meets up with the rest of his friends, we learn that the Rintaro in this world line is no different from the Rintaro that we see right now. He’s a sad, pathetic man who has lost all confidence and joy in his life. It doesn’t matter who he saves. It doesn’t matter if he chooses the love of his life or his childhood friend. Either way, he’s going to suffer. The only solution is to save both girls. And at first, I got super frustrated as I watched this week’s episode. Why? Because Kurisu is so goddamn supportive of Rintaro. She’s always been supportive of him. Even in the original series, she convinced him to save Mayuri, and she does the same again here. Even though Rintaro had supposedly smashed the Phone Microwave in this world line, she even went and rebuilt it so that he could one day save Mayuri. So the events of Steins;Gate episode 22 happen all over again albeit slightly delayed. Once again, she kisses him. Once again, he didn’t want to go back, but she guides him towards his destiny. And as I’m watching this, I’m just like, “Why’s it gotta be like this? Why did Mayuri have to let Rintaro give up?” 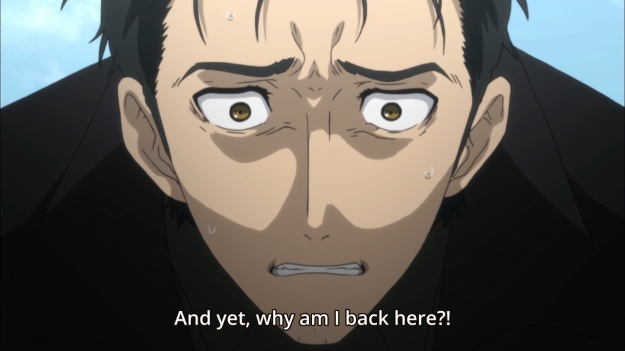 That’s because I had Steins;Gate 0 all wrong. I thought it was a “what-if” story, and as a result, I found it wholly unsatisfying. Look, I joke a lot about Mayuri being the worst girl on the show, but back in the original series, she gave Rintaro the pep talk that he needed. She even slapped him across the face to get her point across. So I didn’t understand why they had to make the worst girl even worse. Why explore an alternate reality in which we get a crappier Mayuri, a crappier Rintaro, and a crappier Kurisu (in the form of Amadeus)? We already got the true ending, so why are we rehashing the entire plot but with inferior versions of the main characters? But that’s where I was wrong. Steins;Gate 0 isn’t a what-if story at all. It’s the story that we never got. We’ve been rumbled. We thought episode 23 naturally followed episode 22 in the original series, but there’s actually a huge gap between the two. Yep, Steins;Gate 0 is that gap. So it should be Steins;Gate 1-22, then 23 Beta, Steins;Gate 0, then finally Steins;Gate 23 and 24. I was frustrated with Steins;Gate 0 ’cause I didn’t know it was actually necessary. Now, if you already knew this, you’re probably thinking, “No shit, dude!” But can you really blame me?

First, the naming is totally confusing. Why call it Steins;Gate 0 if it’s not a prequel? Secondly, I don’t read the promo materials. I don’t touch the visual novels. I go into most of anime series as blind as possible. I might quickly scan through a trailer, but that’s it. So with the original series being a distant memory in my mind, I naturally assumed that Steins;Gate 0 was a “what-if” story. After all, why are we telling this out of order? In what other piece of fiction would you go halfway through, suddenly skip to the true ending, then after seven years have passed, hop back to the midpoint? It’s such a confusing, convoluted way to tell a tale. Luckily, this week’s ending does add something to our understanding of one event from the original series. Like I’ve outlined above, it helps us see the original ending to episode 22 in a new light. The person who made sure Kurisu would always be late ends up being herself. Not only does she sacrifice herself for Rintaro’s sake (as well as Mayuri’s), she even sacrifices her chance to confess her love to him. Seeing her run to confess to Rintaro, seeing her receive the message right before she entered the lab — we need a lot more of this sort of thing. We need less parties, less cosplaying, and more recontextualizing of powerful moments from the original series. 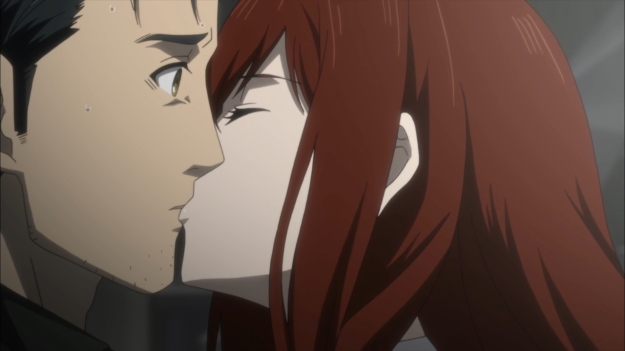 By the way, I thought the song that played during the ending felt totally out of place. Way too cheerful. Also, it’s interesting to see Kurisu also warn Rintaro to stay away from Amadeus but for different reasons than Maho. It’s obvious to us that someone — Alexis, maybe? — wants Rintaro to help tease out Kurisu’s time traveling theory from her memories. I’m just not sure why our hero is so oblivious to this fact. Maybe he’s blinded by the ability to talk to a copy of Kurisu that the possibility of triggering WW3 never crossed his mind. Finally, where the hell did he end up?