Everyone catches it at some point.

— So we pick up where we last left off, and Alec wants to know if Teresa has actually fallen in love with Mitsuyoshi. The red-haired girl already knows the answer to her own question, but she wants to confirm it with Teresa.

— Are these drops of tears? Either way, the scene is cut abruptly short. I suspect we won’t find out how it ends till later, but I imagine Teresa still being held prisoner by Alec’s feelings. Essentially, she feels obligated to fulfill her duty as the future queen of Larsenburg because if Alec isn’t happy, then she won’t be happy. This is likely true. Conversely, Teresa probably also believes that if Alec is happy, then she’ll be happy as well. Is this true? I’m not so sure. Teresa likely thinks that if she can just ignore her feelings for Mitsuyoshi, she’ll only have to sacrifice a portion of her happiness. If that’s all it takes to prevent Alec from crying, then it’ll be worth it. But that’s naive.

— After the OP, we see a flashback scene where both Teresa and Alec are young children. A woman is reading a Rainbow Shogun storybook to them. Naturally, Teresa has always wanted to grow up to be like the Rainbow Shogun. Alec, on the on the other hand, has always wanted to grow up to be a ninja… a ninja that protects her queen. This seems like such an innocent scene, but it says a lot about the red-haired girl. Her desire to see Teresa become queen is just as much about her as it is about her friend. Alec sees herself as Teresa’s bodyguard forever and ever. This is her dream, and although she might not come out and directly admit it, she selfishly doesn’t want anything to potentially ruin her ideal future. As a result, she’s way too protective of a teenage girl who obviously wants to spread her wings and live her own life.

— Plus, I’m still confused as to why falling in love with a foreigner is such a big deal, but maybe the show will explain that to us at some point.

— Before we know it, summer vacation is over, and the kids find themselves back at school. Teresa is obviously nervous around Mitsuyoshi now that she’s cognizant of her own feelings for him, but unlike most heroine, she doesn’t turn into a puddle of blushes and flushed cheeks. Instead, she brims with red-hot samurai spirit! She even decides to greet people in an odd way. She does it repeatedly throughout the day. I kinda like this. I find it amusing and a nice change of pace. It beats the alternative. 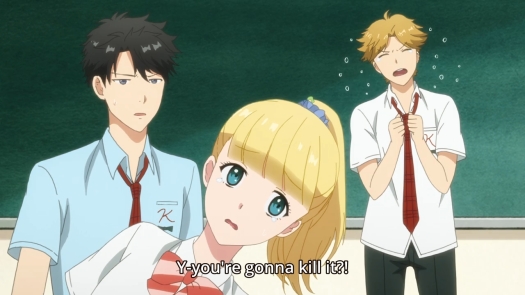 — This next part is dumb, though. In class, Mitsuyoshi spots a caterpillar crawling on Teresa’s head. When he brings her attention to it, the girl freaks out. I assume she’s scared of creepy crawlies or whatever. She asks Alec to help her out, but her best friend seems to have an issue with bugs as well. Guys, it’s just a caterpillar. In the end, Mitsuyoshi gets to look like a hero when he goes and gets rid of the caterpillar for her. The entire class even gives him an ovation. Am I on drugs or something? It’s just a fucking caterpillar.

— We’re bringing out all of the romantic tropes! At one point during class, Teresa drops her eraser, and it conveniently bounces backwards! Mitsuyoshi gladly hands the eraser back to the girl. Atta boy! I’ve seen Just Because!, so I know perfectly well that girls can’t help but fall in love with you if you give them erasers!

— And no romance is complete without the hero sacrificing his umbrella for his love interest’s sake! Unfortunately, he doesn’t get to share it with the girl. Instead, he stays behind to wait for Kaoru… who ended up not bringing an umbrella either. They both have to run home through the rain.

— The next day, the entire Photography Club has gathered to pick and choose which star-themed photo to enter into a contest. Naturally, Teresa snapped a picture of a star-shaped rock. She’s cute, but she’s almost as dumb as a rock.

— Alec offers up a picture of a star-shaped truffle.

— Dog-kun gives us a picture of an angry cat with a star-shaped patch of fur.

— Luckily, both Hinako and Pin-senpai actually snapped pictures of actual stars. When it’s finally Mitsuyoshi’s turn to share his picture, I half-expected to see him offer up the photo of Teresa gazing up at the night sky. Unfortunately, he ends up passing out from a high fever instead. That’s a little dramatic, isn’t it? When’s the last time anyone has ever collapsed from a cold? Maybe he pushed himself to go to school, because he’s trying to hard to be a grown-up, but even then, I still find this to be a bit much.

— Anyways, Teresa blames herself for Mitsuyoshi’s illness, so she volunteers to help out at the coffee shop.

— Mitsuyoshi’s dear sister whips up this weird, red porridge. I think it’s supposed to be congee. It apparently has the ability to temporarily turn you into Dhalsim.

— As for Teresa, a nice, old couple hands her two tickets to a fancy Rainbow Shogun show. Obviously, she and Mitsuyoshi have future date to schedule.

— They keep cutting to this guy whenever anything related to the Rainbow Shogun comes up. I bet you he’s the actor behind the character or something stupid like that.

— We also get an odd scene where Alec is the only person strong enough to open a jar of coffee beans. I don’t really know what this adds to the story… good to know that she’s stronger than the boys? Alec, of course, is unfazed all her friends’ praise (I didn’t mean to rhyme). Instead, she’s just worried about Teresa, who has gone upstairs to help Yui. We finally get to see how the rest of the opening scene had played out, and as expected, Teresa had assured Alec that she will stay on target. Heh, not if Darth Tada has anything to say about that.

— Upstairs, Yui asks Teresa to go get Mitsuyoshi’s porridge bowl. This gives our heroine the chance to be with the sick boy all by herself. You know what that means.

— When she enters his room, a convenient breeze scatters a bunch of photos onto the floor. The girl gets to see all of the wonderful moments they’ve shared over the summer through his eyes. Gosh, this is making it harder and harder for her to eventually leave at the end of the year, isn’t it? You can see the conflict on her face.

— I really like the music that plays during this scene. It’s a slower piano remix of the main theme, and I love the use of leitmotif in any piece of fiction. Love it.

— When Teresa stares at the soundly sleeping Mitsuyoshi, love overtakes her. She can’t help but lean in and kiss him with only Nyanko Big as the witness.

— W-what about the cooties?! But seriously, he’s sick, so uh… that’s a risky kiss.

— When the girl snaps back to reality, tears well up in her eyes. She then apologizes and holds the cat as she sobs quietly to herself. Even I got a little choked up at her emotions. All jokes aside, she’s obviously in a difficult position. Again, I don’t know why a modern princess can’t just marry whoever she wants, but let’s just play along. She has to feel as though she’s betraying both Alec and Charles by falling in love with Mitsuyoshi. She wants to grow up and become a stronger person, and she probably thinks that falling in love like this is childish. And to be fair, she is being a little childish about this. At this point, her feelings for Mitsuyoshi is undeniable, so she may as well be honest about them. She should have an honest conversation with both Alec and Charles about what she’s going through right now. She doesn’t have to make any decisions yet, but at the very least, she should be open with them if she wants to blunt the pain as much as possible. Get the difficult conversation out of the way.

— I would also bet that Teresa doesn’t want to drag Mitsuyoshi into this mess. If she could just leave Japan at the end of the year with no strings attached, then nobody gets hurt. He’s still dealing with his parents’ deaths. Does she really want to add this onto his plate? What if he starts reciprocating her feelings as well? All of these people will be hurt just because Teresa couldn’t be an adult about it and ignore her love for Mitsuyoshi. Look, I don’t actually believe this. I actually want Teresa to be with whomever she loves. But obviously, the girl is breaking down right now because she’s torn between her obligations and what she believes to be her own selfish desires. Yeah, maybe falling in love with Mitsuyoshi is selfish, but we get to be a little selfish sometimes. Especially when it comes to the matters of the heart.

— To be honest, I still don’t see what she sees in Mitsuyoshi…

— Anyways, the girl later comes downstairs, but her eyes are hidden from our view. Her friends don’t seem to notice that she’s been crying. I dunno, it’s kinda hard to hide that sort of thing. Even if you wipe the tears away, it’s painfully obvious if you’ve been crying.

— After the credits, we see that Mitsuyoshi is already up and about. Huh. He sure recovered from that 104 fever real fast. Teresa then asks for a favor, but the episode ends before we can hear what she wants. Judging by the next episode preview, however, it’s obvious that she’ll invite him to accompany her to the Rainbow Shogun show. She probably wants one date with the guy, thinking that it’ll help her get over him. Y’know, have that one last moment of fun before she tries once more to bury her feelings for him.

— At this stage of the game, however, it’s Mitsuyoshi’s turn to finally show some signs of life. If he wants this girl — assuming that he even wants her at all — he needs to fight for her. Also, Alec’s gotta give a little. ‘Cause even if Mitsuyoshi returns Teresa’s feelings, the princess will never be at peace unless she has her best friend’s blessing. We still got about three episodes left, so plenty of time for all three characters to undergo some major character development.