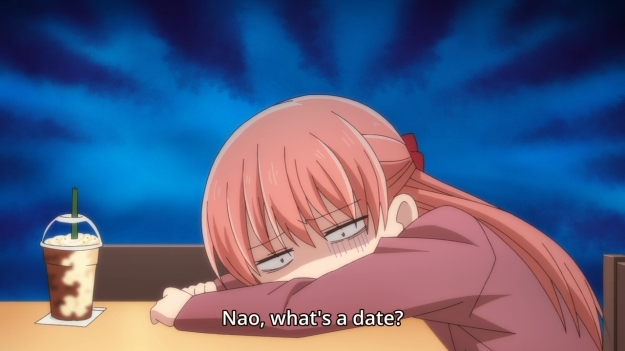 This week, Hirotaka and Narumi both realize that they’ve never actually, well, gone on a date as a couple. At best, they only ever hang out. Isn’t that odd? Dating is not difficult. One of the simplest dates is to just take someone out to dinner. You pick a nice-looking restaurant, then you take your date to it. Done. Anyways, starting from the beginning…

— So there’s inclement weather, and this makes Narumi act all chuuni. I have no clue why it’s translated as “angsty” here.

— She forgot her umbrella again? Didn’t we already have this gag?

— It turns out Hirotaka is afraid of thunder. Why? Because he has bad memories associated with it… like, y’know, losing his game saves. Haha… I swear, the jokes here are so lame. Nevertheless, his fear is bad enough that he even switches seats for the day. Not that it helps. Eventually, the guy goes on a “SAN check.” What’s that? A sanity check?

— Eventually, Narumi is worried about him, so she decides to take a break at the same time. Just talking to her takes his mind off of the bad weather. In fact, he’s even reminded of a moment in his childhood. He was sick and alone back then, but Narumi came over to check up on him. They were both scared of thunder, but because they had each other, they were fine in the end. That’s sweet, I guess. Of course, this is a memory that only Hirotaka can apparently recall. Narumi never seems to remember anything about their time together as kids. It’s a matter of importance, really. He may look emotionless, but the guy has been pining for her all of his life. Every moment he has with her is important to him. I don’t believe that she feels the same way.

— We even see a flashback where Hirotaka pierced one of his ears for the first time. He doesn’t really look like a guy who wears an earring, huh? Well, it turns out he only did it for Narumi. He saw Narumi with a boy with piercings, so he tried to emulate the guy. Yeesh. This goes to show you how much Hirotaka actually likes her. Unfortunately, he seems unable to communicate the depth of his feelings to the girl, so she just writes him off as another stereotypical game otaku. I like to believe that she truly cares about him, but does she actually see him in a romantic way? I don’t think so. Not yet, anyways. I find that kinda sad. I just think couples in a relationship should be enthusiastic about each other. Of course, if Hirotaka is happy with this arrangement, then so be it. If this half-hearted relationship with Narumi is what he wants, then hey, who am I to say that they should break up? But maybe he isn’t as content as he lets on. 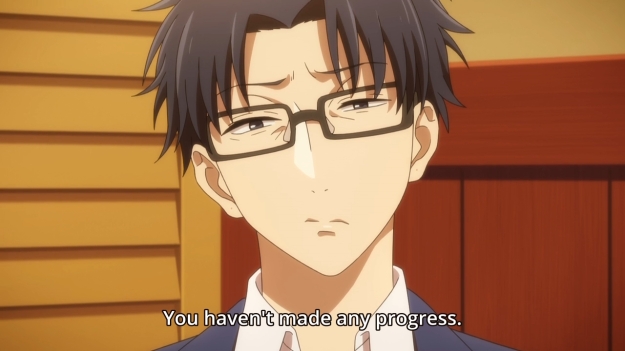 — This is Hirotaka trying to show his friends that he’s been practicing how to wink. Yep…

— As usual, Taro and Hanako like to bicker in public. I find their relationship exhausting, but they’re still together so whatever…

— Narumi actually has Taro pegged. I’m actually surprised by her astute observation. Still, she thinks that those two are deeply in love, which I find a little harder to swallow.

— Hirotaka wants to know if Narumi would be bothered if he ever got drunk and flirted with another woman, but the girl doesn’t take the question seriously because she can’t even picture it. Yeesh. She’s not just saying that she can’t picture him acting shady. She’s also saying that she can’t picture him flirting at all. And to fair to Narumi, I can’t picture Hirotaka as a flirt either. Still, it always hurts when your girlfriend doesn’t take you seriously. These words actually linger with Hirotaka. He can’t help but think about it long after the dinner. He also can’t help but think back to all of the other insensitive things Narumi has said to him. Of course, she never says any of these things out of malice, but y’know… if you were in his shoes, you’d be hurt too. But Hirotaka has to take some of the blame, because he’s not very proactive either. He became complacent after they started dating. He doesn’t take her out, he doesn’t flirt with her, he doesn’t do anything!

— The next day, Hirotaka sees Taro and Hanako bickering again, so he wants to know what they’re like when they’re alone. Do they act like a couple? Hirotaka just wants to know. He wants to know who he should in order to move his relationship with Narumi forward.

— Taro tries to act all casual about it, but it sounds like he’s been taking the relationship for granted as well.

— Needless to say, he manages to smooth things over by promising to take Hanako out at the next available opportunity. She still ends up slapping him, though. What an exhausting relationship…

— Still, this gives Hirotaka plenty of things to think about.

— Meanwhile, Narumi pays Nao a visit, because there’s a new frappe flavor or whatever. When Nao asks the girl how she and his brother are doing, she also realizes that they don’t really act like an actual couple. 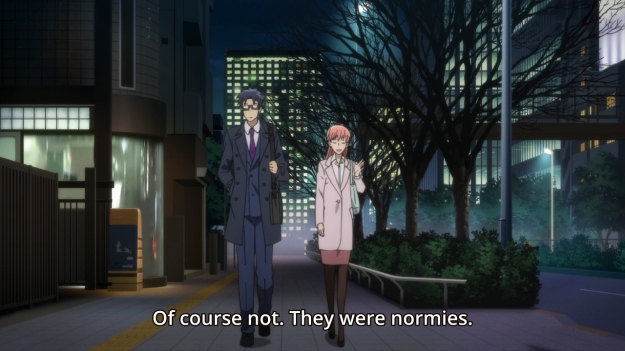 — When Narumi is finally walking home with Hirotaka later that night, she thinks about their relationship. Unfortunately, she’s content to be passive. I guess we all still expect the guy to make the first move, and since she can’t picture him being a romantic normie, she just assumes that they’ll never go on a normie date. Again, I think a healthy couple should communicate more. If she wants more from this arrangement, then she needs to let Hirotaka know about her feelings. But maybe she doesn’t really care if their relationship takes the next step. I doubt Narumi has ever really sat down and consider whether or not this relationship has any future. I’ve said it before and I’ll say it again: she seems to be only dating Hirotaka out of convenience.

— Anyways, Hirotaka has had all day to think about this, so he finally decides to ask Narumi out on a proper date. The girl is left in a state of shock as the episode comes to an end. After eight weeks, these two might finally start acting like a couple. I still don’t really care for either of them all that much, but Narumi in particular kinda bugs me. I just think she’s a little too laissez faire about this relationship. She’s not fully committed, and I don’t think that’s fair on Hirotaka. She’s just content to be on cruise control, which is why I don’t find her remotely endearing.