Well, since there’s no DARLING in the FRANXX this week, I suppose I’ll get started on My Hero Academia first.

— Reporter: “You don’t call 26 victims and one abducted the worst possible outcome?” Uh, of course not. Obviously, this reporter is just being belligerent. He smells a juicy story — especially one where he gets to claim the moral high ground — and he’s out to get it.

— Of course, I don’t think Aizawa’s instructions were 100% ideal at the time, but they weren’t bad. I thought the decision to have the camp out in the middle of nowhere was way, way worse. Why would you assume that the bad guys have no idea where you are? Why can’t the students just train their quirks at school?

— This guy is just being an ass now. UA needs to hire some professional stonewallers to get rid of pricks like him.

— Oh for fuck’s sake, he’s still going. I’m droning him out. I’m ready to move onto the next scene already.

— Aizawa believes in Bakugo, which just gives the kid even more strength to resist the villains. Maybe the bad guys shouldn’t have the TV when they’re trying to break the kid. Oh well, maybe Shigaraki thought that the instructors would flub the press conference.

— See, I don’t think kidnapping Bakugo is ideal. Sure, he’s got a temper, and his Quirk is powerful. But he’s also way too headstrong and prideful. And a temper doesn’t mean he’s personally conflicted. He’s not angsty like Sasuke. He’s not on some quest for revenge. I don’t like Bakugo because he often loses his shit for no reason, but that’s exactly it. Oftentimes, his anger is goofy. This isn’t something that evil can really prey upon.

— Kurogiri wants Shigaraki to calm down, but I’m the opposite. I actually want Shigaraki to do something, because c’mon, when’s the last time he actually lifted a finger. Back in the first season?

— This looks so stupid.

— Maybe this guy can stop hiding in the shadows and finally do something. I just want at least one badass villain. Stain didn’t count, because I thought his philosophy was dumb. C’mon, gimme one badass villain. Gimme someone that I would love to root for, but I know I can’t because they’re evil.

— The kids arrive at their destination, but it doesn’t look like they’re standing outside the bar. The tracker was only planted on a Nomu, right? So yeah…

— Endeavor doesn’t want to clean up after UA? Uh, forget UA. What about saving a kid?

— Oh yeah, Ragdoll was also kidnapped. I keep forgetting about her, because I just find it odd that they even bothered.

— I like how the kids are trying to be sneaky, but there’s nothing inconspicuous about five individuals standing around one vending machine. They should have Momo create a drone or something, but maybe she doesn’t know how to. At the very least, they should have her create earpieces so they can split up and still communicate with each other. I don’t think it’s very smart for all five of them to move together.

— Oh boy, they came looking for Bakugo, and they got an entire warehouse full of Nomus instead. This sort of thing is just sitting in the middle of a city, huh…

— Compress: “I can’t believe [Bakugo’s] such a bad listener.” Maybe you guys should have done a better job at mentally profiling him.

— Before anyone can lay another finger on Bakugo, the pro heroes literally crash the party.

— Yo, a lot of these guys better be arrested if the pro heroes manage to get such a huge jump on the villains.

— Meanwhile, Mt. Lady is going all Godzilla on the Nomu factory. Man, for all the drama, Deku and his buddies are completely useless right now. They’re not needed for anything… unless All For One manages to turn everything in the villains’ favor by simply showing up. 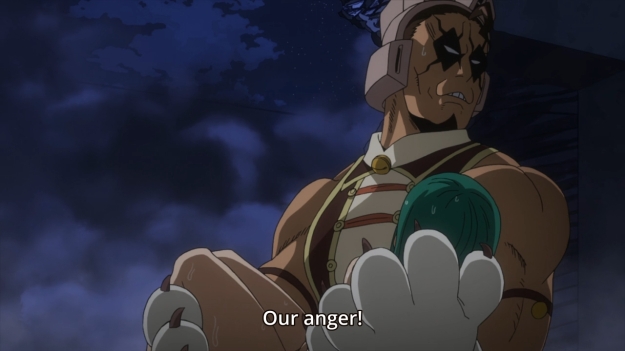 — Oh, Ragdoll was also in that abandoned warehouse? Why were they just keeping her there?

— This is going too smoothly for the pro heroes. They even have time to stand around and talk shit at Shigaraki. You know something bad is about to happen real soon, ’cause if this was over, they’d just haul all of these guys off to prison. Why are we still standing around talking? I guess they want Shigaraki to reveal All For One’s location, but do we really gotta interrogate him here?

— I guess Shigaraki was a victim of the bystander effect — one that has been warped by a world in which heroes exist. Still kinda stupid to blame that on heroes, though. That’s society’s fault as a whole. But I guess he never stood a chance with an evil guy like All For One whispering bad stuff in his ears. See, you need angst to corrupt someone.

— Welp, here’s where things go pear-shaped: even though Kurogiri is unconscious, Nomus are still appearing out of nowhere. All For One must have some kind of ability to transport people as well. The guy must still have like 20 Quirks or something.

— The hell? The black gunk is also coming from Bakugo’s mouth?

— The Nomus are now causing mayhem in the streets and overwhelming the police. More importantly, Deku and his friends won’t be useless after all. This is their time to shine.

— So we get to see what happened two minutes ago. Mt. Lady sticks her tongue out at these Nomus. I find it amusing. Her colleagues are all trying to be professionals, but she’s just straight up disgusted.

— Poor Ragdoll. It turns out All For One stole her powers. I don’t see him going down anytime soon, and even if he did, that doesn’t mean that she’ll get her powers back. This is pretty much the end of her pro career. Plus, didn’t they say that like 80% of the population has a Quirk? Either way, it must feel crippling to suddenly lose something that you’ve had all your life — something that you actually identified with. Her Quirk was essentially her, and now it’s gone. Ragdoll’s going to need a lot of support after this incident, because I can’t imagine how she won’t be devastated when she finds out that she’s Quirk-less.

— Best Jeanist tries to subdue the guy, but he’s clearly outmatched. But before we can see what All For One just did, the credits roll. Boooooo. Booooooooooooo.

— Wait, what? All For One’s spirit gave them visions of death? I dunno, man… that feels like we’re overdoing it a bit.

— Still can’t get a good look at the guy. Oh well, I guess that’s reserved for next week’s episode.