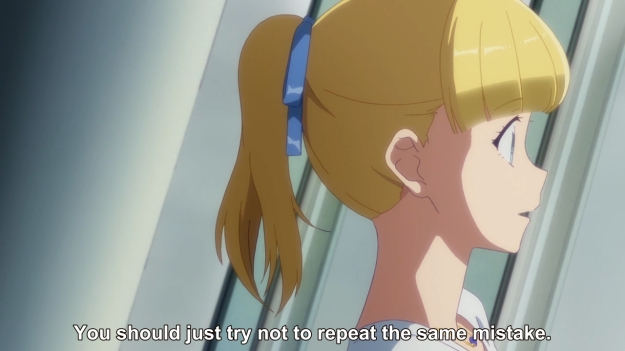 It must be hard to be a dense teenage boy. Over and over in this week’s episode, Tada is on the verge on falling for Teresa, but he can’t quite get there. And even if he could, it’s not like he would ever confess his feelings. Not yet, anyways.

— In this week’s episode, Mitsuyoshi and Teresa go on their first date. Unfortunately, the guy has no clue that they’re on a date at all.

— More importantly, she intends it to be their last date as well. It’s such an anime thing. She’ll share one last shining moment with him in the hopes that it’ll give her the closure she needs. She thinks that she’ll be able to leave Japan behind once she spends this last day with him. Hm, we’ll see.

— Oh hey, are these two cats finally getting along now? I guess persistence is the key. Mitsuyoshi could probably learn a thing or two from his cat.

— Mitsuyoshi even manages to win Teresa a can of Rainbow Shogun candy.

— In return, she tries to win him a rainbow fan, but she’s not quite a sharpshooter herself. Luckily, Teresa has someone looking out for her. Yep, it’s that guy from the coffee shop. He must be the original Rainbow Shogun actor or something.

— To be honest, Teresa’s cheerfulness is kinda infectious. Even I couldn’t help but smile at her antics. Mitsuyoshi, on the other hand, is no fun.

— When they attend a live show, they get swept up in the action. In the end, the girl gets to do her favorite pose on stage, but the guy is being a total wet blanket. C’mon, put your heart into it! You’re not gonna win the girl at this rate!

— At one point, a staff member refers to Teresa as Mitsuyoshi’s girlfriend, and he acts all embarrassed and uncomfortable. I know Teresa likes the guy, and the heart wants what it wants, but man, I totally cannot understand what she sees in the guy. He’s just so stiff and joyless.

— Hm, she might actually look better with black or dark brown hair than blonde. 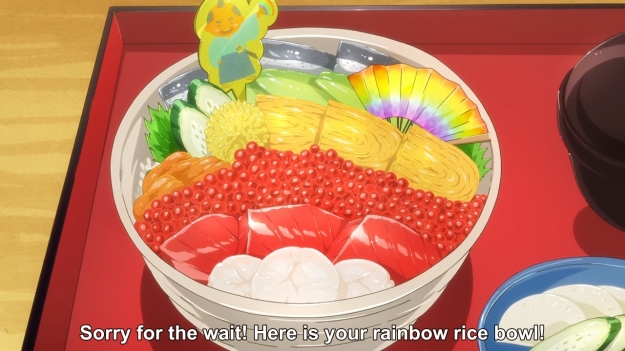 — Anyways, somehow Teresa starts talking about Rachel, her nanny. Her real name is Reiko, i.e. she’s Japanese. Not only that, it looks like she used to work at Mitsuyoshi’s grandfather’s coffee shop. We suddenly cut to Alec handing Mitsuyoshi’s grandfather a letter from Rachel/Reiko. Odd. I wonder if they were simply friends or perhaps something more. Either way, she ended up falling in love with a man in Larsenburg and became the royal nanny. Maybe she taught Teresa perfect Japanese.

— What a harsh thing to say. But apparently, Mitsuyoshi only said this because he’s deathly afraid of flying. At first, Teresa is sad, but she eventually breathes a sigh of relief. Still, it’s not like she expects him to follow her anyways.

— Back at the coffee shop, Kaoru shows up and starts flirting with Alec like usual. But instead of getting mad at him, she’s being unusually patient with his antics. That’s no good. Not only does her behavior throw Kaoru off, it feels like she’s ready to leave Japan, and if that’s the case, Teresa is ready to leave as well. Mitsuyoshi has no clue what he’s about to lose. Throughout this week’s episode, he stares at Teresa as if he’s about to fall for her, but he just can’t quite understand the fullest extent of his feelings for the future Larsenburg queen.

— When Alec leaves the coffee shop, she lingers for a second at the front door before finally walking away. Yep, she gone.

— Eventually, Mitsuyoshi summons up enough courage to climb the tower, but by the time two of them get to the top, the weather has turned sour. All they can see is an endless expanse of clouds. The future ahead of them is hazy at best. It almost feels like a bit of foreshadowing. By the time Mitsuyoshi ever does anything, it’ll be too late. Hell, short of a grand gesture that sweeps Teresa off her feet, it’s probably already too late.

— Mitsuyoshi sees a young child being photographed by his father, and this dredges up some painful memories. But for once, he’s ready to open up because he feels a certain connectedness with Teresa. Essentially, he blames himself for his parents’ death. He knows it’s illogical, but he can’t help but feel as though he could’ve slowed them down if he hadn’t been such a brat that day. If he had slowed them down for just a few minutes, maybe they wouldn’t have died. Of course, that’s silly, but guilt’s a powerful thing. 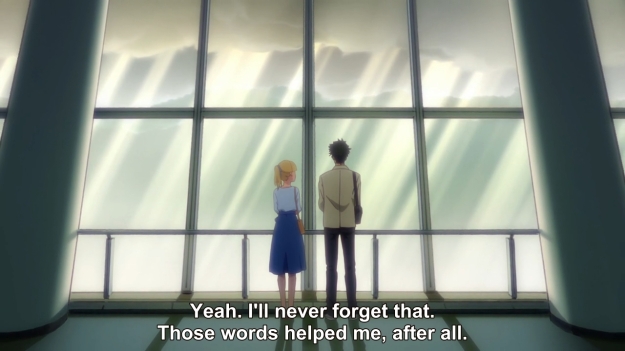 — Teresa then gives Mitsuyoshi the same advice that he had given her: “You should just try not to repeat the same mistake.” Basically, if he has feelings that he needs to express, he should do it before it’s too late. But he’s doomed to make the same mistakes, ’cause he has no clue what his actual feelings are. Mitsuyoshi needs to tell her he loves her before she disappears from his life, but he doesn’t even know if he loves her yet. He won’t know until she’s gone. We often don’t know how much something means to us until we no longer have it. Ironic, isn’t it?

— After that, a rainbow appears across the sky, but Mitsuyoshi isn’t ready to take flight quite yet. The girl slides over closer to him and says something totally romantic and heartfelt, but unfortunately, the guy isn’t even paying attention. Oy vey. Naturally, she plays dumb afterwards. He missed his chance, and you just wanna smack him upside the head. But he needs to learn, and he can only learn from his mistakes.

— Mitsuyoshi then looks down and notices the clear glass floor. Time to freak out. I guess that marks the end of our date. To sum things up, Mitsuyoshi is making progress, but he’s still hung up on the past. He’s inching forward, but time is not on his side.

— Later that night, Teresa does not look happy as she walks home with Mitsuyoshi. Despite having such a fun day together with Mitsuyoshi, she knows she has to leave her first love behind. When he hands her a photo of them posing with the Rainbow Shogun, she looks like she’s about to cry. If she wants to get over the guy, having that photo isn’t going to help. I mean, just imagine her marrying Charles… would she still gonna hold onto that photo? Anyways, the ever perceptive Mitsuyoshi is right in front of the girl, but he just cocks his head to side as if he can’t comprehend human feelings. He looks through the viewfinder of his camera everyday in order to capture beauty, but he can’t understand a thing with his own two eyes.

— As Teresa slowly starts to leave, Mitsuyoshi calls out to her one last time. She seems to perk up at this. Maybe she’s hoping for a last second confession. After all, the guy needs to throw a Hail Mary pass if he’s going to keep her from leaving. Unfortunately, he simply offers her to join him for a drink of coffee. She turns it down and watches him enter the coffee shop. When he is finally out of earshot, she pretty much says her goodbye. She gone.

— Kaoru eventually emerges from the coffee shop, and he notices that Teresa isn’t stopping at her hotel. Instead, she’s walking off into the distance. For those of us who want a happy ending, the show’s just rubbing more salt into the wound. 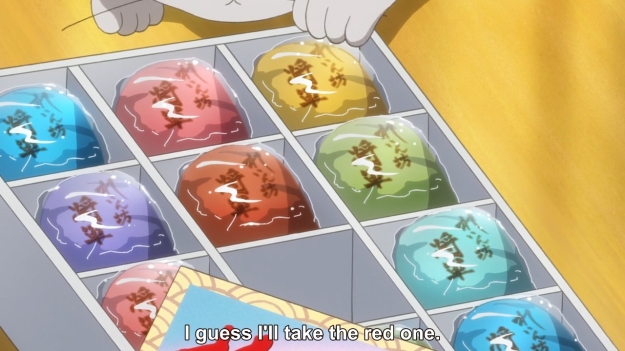 — Oooh, those manju look nice. This show’s animation isn’t mind-blowing or anything, but it’s just well executed. Nice use of color, consistent work through and through.

— Mitsuyoshi has souvenirs for everyone. Even Nyanko Big gets a new toy.

— The next day, he tells Kaoru that he has decided on a photo to enter into the contest. He just needs Teresa’s permission first, which means he wants to use the photo he had taken of her that night. Unfortunately, neither she nor Alec are anywhere to be found. The guy is devastated, but… eh… I’ll explain my issue with Mitsuyoshi in just a bit.

— The preview for next week’s episode suggests a down-in-the-dumps Mitsuyoshi doing a whole lot of soul searching. Maybe his grandpa will have some sage advice for him.

— I think Teresa pretty much carries this anime. She’s super cheerful, but not in a cloying way. Like I said, it’s almost infectious. She’s grown on me over the past few weeks, and I sincerely hope that she finds her happiness — whatever it may be. The problem is that I still can’t understand the appeal in Mitsuyoshi. He’s got the personality of a solid side character, and that’s precisely the problem. I want to root for Teresa, but I don’t necessarily care if things work out for Mitsuyoshi. I don’t wish him ill or anything, but I’m not all that torn up that he’s heartbroken, y’know? I usually empathize with the main character, but I feel nothing for the guy. Hell, his rival is more appealing than him! Maybe I’m being too harsh on the guy, but eh… he’s just so uninspiring as a lead.

— Anyways, we still have three whole episodes left if the info on Wikipedia is accurate. There’s still a whole lot of time for Mitsuyoshi to right this ship. Ideally, he would conquer his fear of flying, hop on a plane to Larsenburg, then declare his love for Teresa in the middle of a foreign country. And y’know, Tada-kun wa Koi wo Shinai is such a happy-go-lucky anime in general that this might just happen. Another possibility is that she simply changes her mind and returns to him one day, but that would be a lame ending. After all, Mitsuyoshi would have undergone almost no personal growth. After all, he needs to take his own advice and say what he needs to say before it’s too late. It’s too late to keep her in the country (presumably), but it’s not too late to prevent her from marrying Charles (again, presumably). The most bittersweet ending is if Teresa simply accepts her marriage to Charles, and everyone moves on with their lives. This might be more suited for a more melodramatic series, but I can’t see it happening here. I could be wrong, though. After all, I still want a happy ending for the girl, so I might be allowing optimism to cloud my judgment. Oh well, all we can do is wait and see.