But we’re not quite there yet. Instead, it’s time for more pancakes. I mean, Akechi! Yes, Akechi!

— The first time I noticed that Makoto was stalking me throughout the game, I thought it was super cute. This is especially true if you confront her, ’cause she just tries to play dumb and run off with her head buried in that magazine. I hope the Police Academy teaches her how to be discreet, ’cause I don’t think this is gonna work on actual criminals.

— I guess we get to see more of the girl’s kindhearted nature in the adaptation (unless this was also in the game and I just never noticed).

— We soon see the class trip to the TV station. For a lot of Persona 4 fans, I think Persona 5 failed to impress mostly because the special events like hitting up the TV station just weren’t memorable. P4 focused a lot on the group’s friendship, whereas in P5, everyone seemed more like coworkers than close friends. They all shared a common goal, but their ties just never felt all that intimate. I’m fine with that, because not every organization needs to be a tight-knit family, but your mileage may vary. If anything, I felt P4: Golden added too many fluff scenes about friendship. The original game already struck a delicate balance, so the Vita port couldn’t help but tip the scales too far in one direction.

— In the game, the guy who tries to recruit Ann did not look like this, but I guess the adaptation felt some generic stereotype of a producer made more sense than a random crewman.

— Oh hey, an early Hifumi sighting. Maybe the adaptation can make her character less boring. I think Yusuke brings her up in the game, but my memory is fuzzy. It’s worthwhile to befriend Hifumi, because the Star social link is amazing. As for the girl herself… eh. First, I don’t care for shogi, and two, I don’t really go for the soft-spoken, proper maiden types.

— At the very least, the adaptation has the Phantom Thieves hang out in a lot more different locations than the game.

— But as always, the adaptation shuffles the order of the scenes. For instance, the guys are supposed to bump into Akechi in a hallway before they watch him get interviewed on set. Oh well. We’ll still get our talk about pancakes, right…? 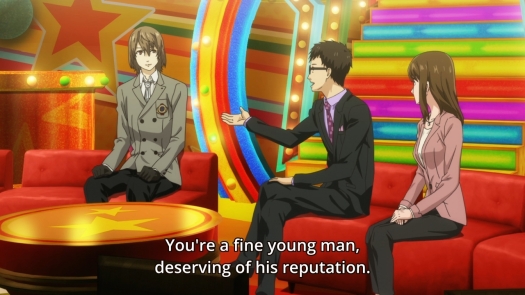 — I like the look on Ryuji’s face. In fact, Ann’s getting pretty serious about this too.

— Akechi isn’t exactly wrong. Messing with someone’s mind has to be somewhat unethical if not downright unethical. You’re fundamentally changing a someone’s personality without their consent. Sure, they end up admitting to their crimes, but if we value freedom and autonomy, we can’t be too happy with what the Phantom Thieves are doing. You could argue that people forfeit their freedom when they commit crimes, but then they should get a fair trial. Having teenagers plumb the depths of your heart does not exactly fulfill that standard. Plus, like with all vigilantes, checks and balances do not apply to the Phantom Thieves. Who makes sure that our group of kids are doing the right thing? No one.

— At the same time, however, it’s easy to talk about law and order in an ideal world. If you have reliable cops, lawyers, judges, etc., then you can depend on justice to work itself out. Unfortunately, we do not live in an ideal world. We live in a world in which a lot of bad guys do get away with their crimes. If the Phantom Thieves hadn’t changed the bad guys’ hearts, who knows if anyone would’ve ever brought them to justice? So we go with a non-ideal solution in a non-ideal world.

— Of course, whether or not the Phantom Thieves are just, Akechi is one to talk…

— Not a fan of the track playing in the background right now.

— So now we get the hallway scene.

— Morgana’s face cracks me up.

— Fun fact: people usually associate the thesis-antithesis-synthesis thing to Hegel, but it really belongs to Fichte. Who’s Fichte? That’s probably why the idea continues to be associated with Hegel.

— I’m sorry, but Robbie Daymond does such a better job than Soichiro Hoshi. I don’t think it’s even close.

— And now that we see Makoto again, yeah, yeah… Cherami Leigh is great. Not head and shoulders above Rina Sato, though.

— The scene where Makoto randomly starts up a conversation with the Phantom Thieves is a lot more effective in the game than it is here. A lot more. Ryuji really needled Makoto when he said, “If those Phantom Thieves are out there helpin’ people… I’d root for ’em, no questions asked. They’ve gotta be more dependable than some people I know.” Makoto couldn’t help but walk off defeated, but this whole exchange set her on a path to actually try and do something… as reckless as that something was. Of course, a future scene with her sister is what really sealed the deal, but it had to start somewhere. In the adaptation, however, the crew just kinda dances around the topic of helping others, then Makoto shuffles off. It’s weak.

— In fact, we’re jumping right to the scene where Makoto entraps the Phantom Thieves. Anyways, in the game, everyone piles onto Makoto. Her sister and even Akechi. Her sister tells her to just focus on her studies, which makes her feel useless and powerless. Akechi rubs salt into her wounds by calling her a pushover. There’s this slow build up that eventually forces the prim and proper student council president to resort to underhanded tactics. Up until this point, all she could do was dorkily stalk Ren. I don’t think she would’ve considered entrapping the Phantom Thieves if she hadn’t been pushed into it. This is sadly blunted in the adaptation. The anime just makes her seem naturally devious.

— So Makoto wants them to look into the matter of the kids being blackmailed by the yakuza, and this will lead them right to Kaneshiro. Having seen a bunch of yakuza bosses in so many other games and movies, Kaneshiro is just pathetic by comparison.

— Again, someone needs to teach Makoto how to be discreet, ’cause this ain’t it.

— The Phantom Thieves can’t find any leads on Kaneshiro, so they turn to an old friend that we all love to hate: Ohya. This is also where Ryuji gets hit on by a rather bad stereotype of gay people, so let’s see if the adaptation keeps that scene in. But first things first, let’s talk to Chihaya.

— I don’t think Chihaya’s social link is very useful. Maybe if you’re shooting for a perfect run on the first playthrough, but I never really bothered. I tend to prefer to let things play out naturally the first time I play a game. As for her story… ehhhh, it’s this boring cultist thing. She has a cute personality, but like a lot of the characters in the game, her social link was whatever at best. Also, I think the original voice actress died, so I’m not sure who’s voicing her now.

— Oh… they did keep it in. It’s even accompanied by the boss theme.

— God, Ohya is such a lush, which makes it even harder to like her personality. To be fair, however, I think she has one of the better side stories, and the boosts to charm every time you talked to her was definitely useful.

— See, they hype up the entirety of Shibuya as Kaneshiro’s Palace, but in the end, you still just run around a bank to get to the bad guy. Sure, it’s a floating bank in the sky, but it’s still an indoor palace. I had hoped to explore an entire city corrupted by money and organized crime. You could even call it a tribute to the mainline SMT games. Those often have you running around Tokyo wards or versions of them. But alas…

— I wonder if we’ll get to talk to any ATMs next week. More importantly, however, we’ll definitely get to see Johanna in the next episode. Who’s Johanna? Oh, it’s just the best Persona that has ever been designed.