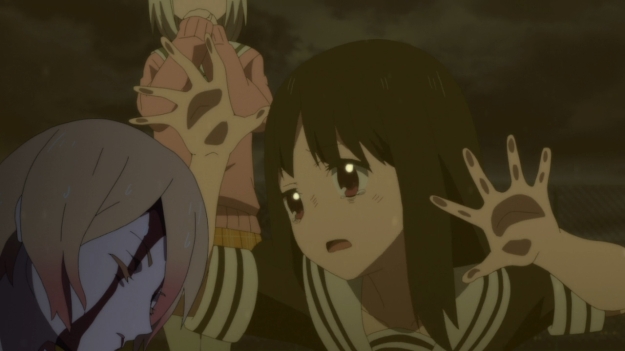 — I never realized how silly you would look on a flying broomstick until I saw how slowly these two girls flew through the air.

— Anyways, the girls have split up into three teams. Four of them are staking out the school. Three are camped outside a girl’s home. And last but not least, we just saw two of them high up in the air. A new girl (yeah, she looks evil as hell) is about to become a mahou shoujo, which means that a Site Administrator would be dropping by either her home or her school. Either way, our team of Avengers will try to ambush the Site Administrator and kill her… it’s her, right? Are all these Site Administrators girls? Nana looks like a girl, but sounds like Frieza…

— Of course, Aya is worried. After all, her buddy Tsuyuno doesn’t have long to live. If the latter continues to use her mahou shoujo powers, she’ll die. This is why Aya tried to take everyone’s sticks away from them at the end of last week’s episode. Still, it didn’t have to be all or nothing. They could’ve come to a compromise. Basically, the healthy girls can continue fighting. Meanwhile, Tsuyuno should just hang back and trust in her team. But y’know, we can’t have nice things.

— Eventually, a Site Administrator shows up, but it ain’t Nana. It’s… whoever this is.

— Rina immediately jumps out of the shadows and yells out to the Site Administrator. This is stupid. Just hit them. You don’t have to taunt them!

— Needless to say, the Site Administrator manages to escape with just a part of her left leg being lopped off.

— Plus, Rina isn’t really a good guy, is she? She’s fighting on the right team, but she’s still psychotic through and through. We can’t forget that she murdered scores of girls before Aya and Tsuyuno finally convinced her to play nice. Rina is still a bad person.

— The Site Administrator then punches the ground and creates a massive crater in the middle of the school. Not only that, you can even see smoke rising from the distance. How does something like this happen and not trigger some sort of security system? Or do fancy, huge-ass Japanese schools not have one? 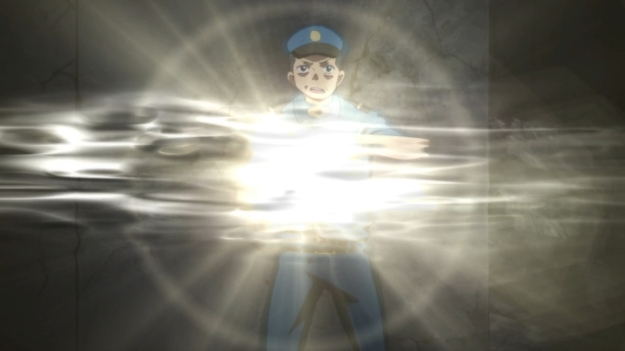 — All the commotion does reach this lone security guard, but he quickly gets turned into a bloodstain. Ho hum.

— And this entire time that Rina is fighting the Site Administrator, Aya and Tsuyuno are just off to the side, being trapped under some rubble. I guess this is all part of their master plan.

— Tsuyuno feels the urge to help Rina out, but Aya holds her back. It’s part of the master plan! This is when the Site Administrator finally notices these two, but before she can strike, Rina gets her first with magical Pikachu powers.

— Rina eventually gets to the rooftop and tortures the Site Administrator some more. But when Aya and Tsuyuno arrive, the body emits a huge plume of purple smoke. Dank, man, dank.

— The three girls that had been camping outside a home is trying to rush their way to the school. Unfortunately, they are stopped short by this Absolute Unit. Not only that, she can multiply. Say goodbye to the first law of thermodynamics.

— Back on the rooftop, the girls stare at the Site Administrator’s body in shock. Not only does she look like a regular schoolgirl beneath the mask, she looks… robotic on the inside? We’re fighting against killer robots?

— But look, robots don’t even look like that. Robots do not have a solid cross section of what looks like random circuits. That’s not how machines work. This is just… who the hell knows what this is?

— Anyways, Nana finally shows up and immediately subdues Sarina with air bullets. That’s my best description of her attack.

— The rest of the team can’t help, because they’re still being held back by Absolute Unit times a hundred.

— With the girls stuck in a desperate situation, Tsuyuno decides to take matters into her own hands. I don’t like this, but I’ll explain why in a second. She gets riddled with a ton of air bullets by Nana, but she still manages to throw Sarina’s killer yoyo at her enemy. Unfortunately, she misses pretty bad and only manages to lop off an arm. Nevertheless, she is able to protect the rest of the girls behind a barrier. Still, this is the end for Tsuyuno. Even if she doesn’t bleed to death, she’s depleted her life source. As she confesses her love for Aya, all the latter can do is scream and cry. 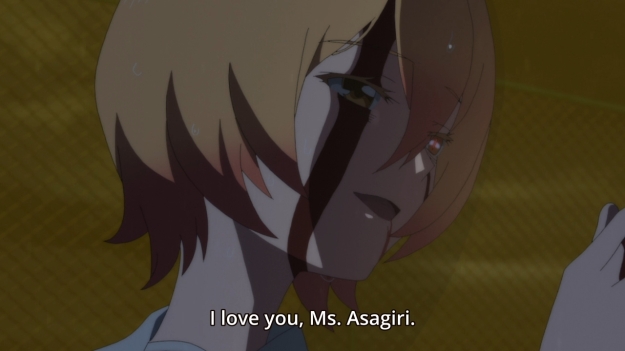 — So why do I hate this scene? First, it’s terribly paced. We just have this super overwrought piano music playing in the background as Tsuyuno chokes her words out. This might have had a greater emotional impact on me if I cared about her at all. Unfortunately, she’s still a pretty bad person in my eyes. Second, this renders that big scene from last week completely moot. Aya wanted to do this alone in order to protect everyone, but the girls convinced her that they should work together as a team. So when the chips are down, what does Tsuyuno do? She acts on her own to protect everyone, thereby completely disregarding Aya’s feelings. It’s so dumb. She claims that this was the best way to guarantee everyone else’s safety, but she doesn’t know that. It’s not like she’s a super genius or anything. Maybe they could’ve come up with a plan if they had worked together, but we’ll never know now, will we?

— Anyways, just one episode left… I don’t really care how this plays out, but at least it’s almost over.

— Wait, wait, we still have one more bombshell left.

— The guy (is it a guy?) who appears to be the leader of the bad guys is about to introduce us to a new Site Administrator.