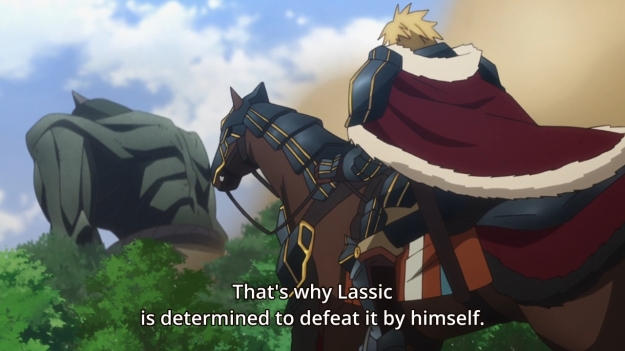 You gotta throw the side characters a bone every once in a while.

— Look at that fancy castle. That’s what our heroes will have to conquer over the next two episodes.

— Obviously, the Mage Academy will not go quietly. Their first trick is to unleash this raid boss. Yep, they just happen to have a Cyclops stored away for a rainy day. Everyone who has played action RPGs like Zelda knows that a giant eye like that is one big, fat weak point, but unfortunately, arrows just won’t do. Our heroes will need to blind the monster using light magic.

— So who’s up first? Why, it’s Sir Lassic! In fact, he’s going to lead a small team up against the giant. The rest of the army will hang back until he succeeds. Hey man, you got this far. You better not bite the dust for no reason.

— Why is Sir Lassic doing this? ‘Cause he wants history to remember him as well. It’s also funny how Theo doesn’t try to stop the guy. First, he says he couldn’t even if he tried. Lassic is that stubborn. Second, he believes in the guy. He was all up in arms about Priscilla in last week’s episode, but apparently, it’s fine for Lassic to put his life on the line. Not cool, man, not cool. That’s not how you treat a bro.

— Too bad the animation is as shoddy as always. Not only that, the guy decides to ditch his horse and do this on foot. Good thing he seems to have super speed… either that or the Cyclops is slow as hell. I mean, shit, just pick up your feet and step on these ants.

— At one point, Lassic even scales the monster a la Shadow of the Colossus. Alas, unless the beast is blind, it seems none of Lassic’s melee attacks can do any damage. I don’t know how that exactly works, but just roll with it.

— Lassic eventually gets to careless, so this Ryze ripoff sacrifices himself to save his lord. Don’t worry, ’cause he can turn into steel. And also red hot. 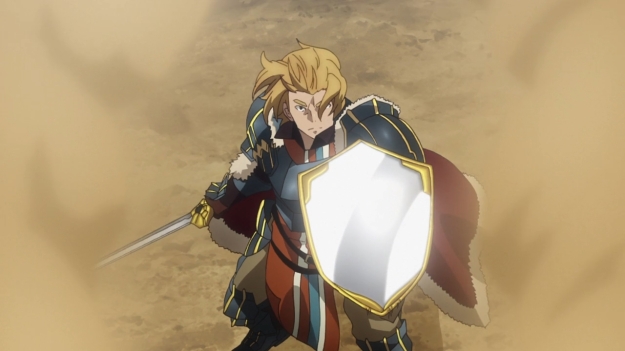 — Finally, Lassic’s mage is done charging up that light beam. When I saw the lord pick up his shiny shield, I really thought we were going to Zelda this up, i.e. reflect the beam of light off the shield and into the Cyclops’ eye. Y’know, like the Mirror Shield. But in reality, Lassic just plays decoy once more.

— Aw, look at the Cyclops. Do we really have to kill it?

— …then this happens. Who knew light could look so fancy?

— So much detail in all of these action scenes! After the giant gets knocked on its ass because it’s blind, Lassic grabs a spear and goes to town on the Cyclops. I thought he was going to drive the weapon right through the monster’s eye or something… but nah, he just kinda beats it down like a club? I don’t even now.

— Unfortunately, this great victory is not without a casualty…

— …whoops, false alarm! When the Ryze reject turns to steel, his organs also stop functioning. You’d think his closest allies would know that by now, but whatever. That’s why his friends thought he had died. They couldn’t hear his heart beating, so they just assumed the worst.

— With the Cyclops out of the picture, the rest of Theo’s forces can begin sieging the castle. I wanted the show to cut to the bad guys so we could see their reaction to their giant going down, but I guess they don’t even care.

— For some reason, we get a close-up of Eudokia’s crotch. I guess seeing enemy soldiers die gets her hot and wild.

— I think this is Villar’s brother, but I can’t really say for sure because I barely know what he’s about.

— Look at these guys camouflage themselves with brown blankets. One simple sieging trick that enemy commanders don’t want you to know! 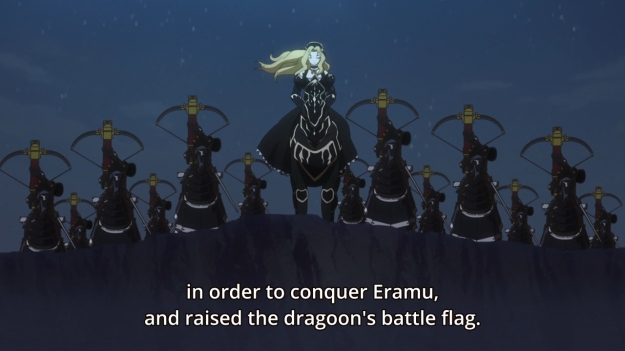 — Finally, we get to see Marrine try to look all cool and gallant, but I still haven’t forgotten her war crimes. Yeah, yeah, she’s going to avenge her family. She should remember, however, that she drove Villar to his death.

— The enemy cannons eventually overload and explode, weakening Eramu’s defense even further. For some reason, however, we get a flashback of Eudokia in bed with one of her man servants, and he proceeds to educate her on the dangers of overusing a cannon. Oh, I get it! It’s a sex metaphor! If you screw too much, the penis will explode!

— Really? This is how you’re going to scale the castle walls?

— Look at the bad guy. He’s not even fazed. Apparently, all they have to do is kill Theo and the rest of the Lords will just fall apart. That’s kinda pathetic, but eh…

— …it explains why Theo is all the way back here. The Emperor gets to chill while his Lords do all of the work. In fact, maybe he shouldn’t even be this close.

— Unfortunately, when he and Siluca look up, they suddenly notice that they’ve been whisked away to the Forest of Eternal Darkness. Just like that, yo. Just like that. Look, if the bad guys could always do this, why didn’t they try this trick earlier?

— And why would you teleport Theo and all of his super capable fighting friends? What are you going to tell me next? That they’re so intrinsically tied to him that they got teleported as well? I mean, I expect Siluca to always be by Theo’s side, by I guess the loli werewolf maids are too! Anyways, tune in next week for the exciting conclusion. Luckily, I’ll be back from NYC to blog all about it!

— I can’t believe Demitrie and his stupid bats are going to be the final boss. He had one episode dedicated to him and almost nothing since. He has next to no character development, and now, he’s the guy who stands between Theo and world peace. Hilarious.