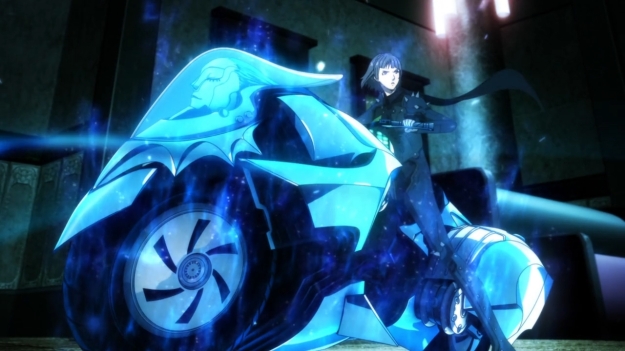 Okay, okay, let’s ignore Makoto’s whole “teach me about love” nonsense at the end of her social link. The worst thing about the girl is that you don’t ever want to hit rank 10. Why would you? You’d lose out on the best Persona in the entire series. Seriously, what was Atlus thinking? Going from Johanna to Anat was such a huge downgrade. In general, all of the evolved Personas are downgrades, but this one especially. Ah well.

— So in the cold opening, we finally get to see Akechi give Makoto a hard time. In fact, the adaptation is actually going the extra mile (extra inch?) by giving us scenes that we never got in the game. First, look at all those books. Second, it’s chibi Makoto! We even get to see the little girl embrace her father. If this isn’t a sign that the adaptation favors Makoto over the other waifus, then I don’t know what it is. It’s a bit odd how she never changed her hairstyle once while growing up.

— Afterwards, we see Sae lose her temper and scold Makoto for not focusing on her schoolwork. This line, in particular, is especially harsh. I’ve watched a lot of people’s reactions to this scene, and they almost always get super pissed off at Sae. After all, Makoto is most people’s choice, so they’re naturally protective of her. While I do agree that she’s being treated unfairly here (and by everyone else around her), I totally get where Sae is coming from. She’s a young woman trying to establish herself in a career dominated by men. Most women in her situation would never dream of having a child, because cultural pressures would force her to quit. Unfortunately, she pretty much had to become Makoto’s mother ever since their dad died. Raising a child is hard shit, man. Plus, Sae immediately realized she is being horrible and quickly apologizes. Anyways, that’s all I’ll say about that.

— Back to our goofy Phantom Thieves, Morgana is still in denial.

— The adaptation did this backwards. The kids are supposed to talk to the ATM first, then discover the location of Kaneshiro’s Palace afterwards. This line is supposed to be a clue. In the adaptation, however, it’s just a useless, throwaway piece of dialogue.

— Huh, I don’t know why the adaptation has Makoto catch a glimpse of a motorcycle ad right before she goes on her wild ride to meet Kaneshiro. I mean, I know why — they want to link this to Johanna’s appearance — but it’s kinda unnecessary. 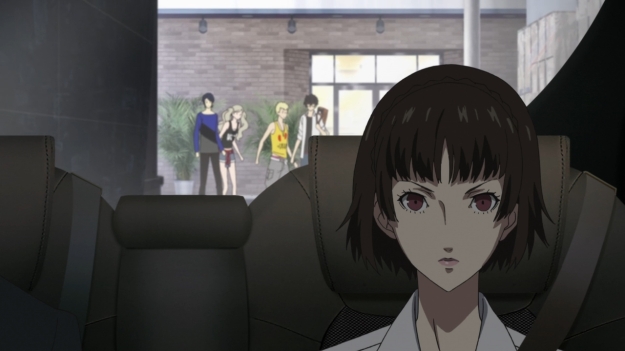 — So wanting to prove that she isn’t useless, Makoto directly goes up to Kaneshiro’s goons and demands to see the big mob boss. This is really stupid and dangerous, but luckily, it’s Persona so she’s perfectly safe. Kinda.

— Sometimes, you just have to shake your head at Yusuke.

— I think they tried to make Kaneshiro seem more sinister than he does in the game, and to be fair, he is kinda silly in the game. They also try to make him seem more sleazy by having him awkwardly stuff three stacks of bills down a girl’s shirt. The adaptation might have also dialed up the rapey undertones a bit.

— I think this scene is a good demonstration of the cultural differences between the East and the West. The kids don’t want this photo to get out, because it would completely shame and ruin them. If Persona 5 had taken place in the States, however, I don’t think this would be a big deal at all. Oh no, not alcohol and smokes! Whatever will we do! I might get grounded by my mom, but that’s about it. Well, my mom’s Asian, so she would’ve just beaten me instead, but y’know what I mean. This is certainly nothing that would require 3 million yen as well as Makoto involuntarily committing herself to prostitution.

— But yeah, the kids have to change Kaneshiro’s heart before he leaks those oh-so-scandalous photos. Luckily, he lets them all go. Somehow, I think a real yakuza would’ve done worse.

— Anyways, I like the adaptation letting us hear what Morgana looks and sounds like from Makoto’s perspective. Y’know, before she gets her powers. As a result, all she hears is one noisy cat meowing over and over, and everyone responding to the animal like they can understand it.

— Ryuji’s not a bad guy, but he’s obviously not all that mature. He’s fighting for justice, but for all the wrong reasons.

— Ah, a girl after my own heart. I kid, I kid. Kinda. Athletic girls are appealing, what can I say? The first crush I ever had was on a girl who loved (still loves?) basketball and eventually played on the high school team.

— Kaneshiro is truly such a small, small man. 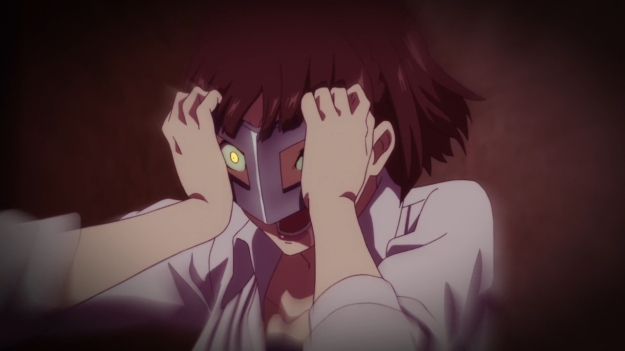 — So Makoto finally gets her powers… her outfit is mostly cool. I just really don’t care for the mask.

— But it’s more than just the bike that makes Makoto cool. She fights with her fists, she brought nuclear-type spells back to the Persona series, she’s an all-around character who can fit any role, etc. And unfortunately, we can’t hear it here, but that English voice acting…

— Nevermind the guy in the middle. The real assholes are the Ogres to the left and right of him. Every time you play a Shin Megami Tensei game and you run into an Ogre, you’re probably going to have a bad time. They’re usually resistant to physical/gun attacks, but at the same time, they have no elemental weaknesses. Worst of all, they like to spam Rampage, a physical move that hits everyone and likes to crit at really inopportune moments. Y’know, like when you haven’t saved in an hour or two. Of course, you can buff and debuff like always. But this is also a good time to take advantage of status ailments like charm or sleep. Unfortunately, if you’ve been playing a lot of JRPGs like Final Fantasy or Tales series, you’re probably not used to enfeebling the enemy.

— There’s something wrong with the placement of the camera in this shot? Whatever do you mean?

— Anyways, the team eventually escapes from Kaneshiro’s Palace, and Makoto officially joins the group. If previous arcs are any indication, we’ll probably defeat Kaneshiro by the end of next week’s episode. We’ll see what happens, though.

— In the after credits scene, Makoto gets her code name from Joker. Too bad the animation is back to being lazy again. The only thing CloverWorks seems to care about are the girls’ posteriors.