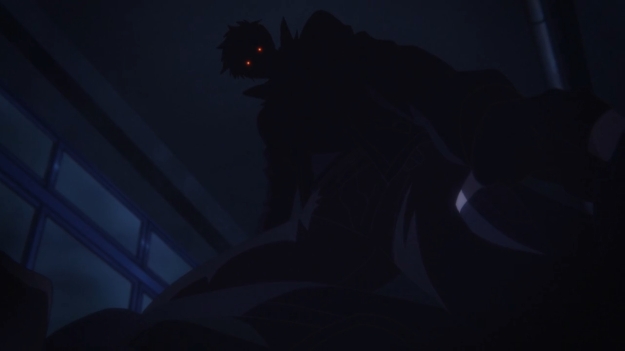 Unfortunately, the adaptation leaves out one of my favorite characters from the manga, so I don’t really care too much about this conclusion. But let’s get on with the show anyway.

— In the cold opening, we see Tsukasa busy sewing something — something for Anzai, obviously. She accidentally pricks herself with a needle and draws blood. This immediately reminds her of her promise to Anzai; she had promised him that she’d never feed him her blood. If the story is going to keep reminding us about this over and over, she’s obviously going to break her promise. That’s just how this sort of predictable storytelling works.

— After the OP, F Squad is planning to raid CCC’s headquarters to acquire a list of the enemy’s roster. Meanwhile, Tsukasa is making herself useful by making dinner.

— Like I said in last week’s post, the adaptation has completely left out Sumimori’s role in this meeting. She’s not plot critical or anything, but I like her. She’s just so hilariously childish and petty, and she’s got the goofiest facial expressions in a manga full of dour people. She’s not necessarily a good person (yet), but the adaptation could use some levity and humor that she could’ve easily provided. It’s so dead serious all the time. The only time it’s funny is when it isn’t trying to be funny.

— Anyways, Anzai and Jill are told to stay out of the raid, because there shouldn’t be any devils within the compound. I mean, it makes sense, right? CCC hates devils, so why would they work with any of them? So goes the best laid plans of mice and men…

— I thought Tsukasa was making dumplings or whatever, but no, it’s just onigiri. A whole bunch of onigiri. I’m big into Japanese cuisine, but man, I think onigiri are overrated as hell. But maybe the ones here just suck. Like you can bring all the sushi masters to the States, but no one has ever bothered to bring an onigiri master.

— The group gets to have one final dinner together before the big dangerous mission. Jill has a thing for Sawazaki, but if you read the manga, these don’t turn out so hot for them. The guy is a bit of a dumbass. Well, not really. He reasonably wants to put boundaries between him and a close-friend-slash-colleague. But love, man, love! 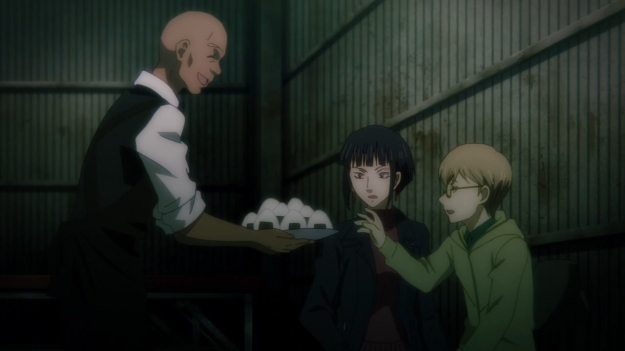 — As for Zero Seven and Zero Nine, I believe things are still up in the air for them. The girl has some real issues to work out. I don’t know if we’ll see it in the adaptation, but she’s still super hung up on Zero Two (between this show and DARLING in the FRANXX, I’m getting real tired of typing out Zero Two).

— Finally, we get to our main couple. Tsukasa has fashioned a utility belt for Anzai. I can’t comment on whether or not it looks good, ’cause function is the only thing that matters here. As she talks to him, she starts thinking of all the good times. Y’know, like when he pushed her up against the wall then stuck a tongue down her throat. Hoo boy, this white bread college girl has never experienced anything that thrilling before! As a result, Tsukasa’s super grateful to have met Anzai.

— Personally, I don’t think the girl is normal. I think most people in her situation would find themselves exhausted with all the danger and drama. After all, she’s had numerous near brushes with death. If it were me, I would have had enough of this shit a long time ago. It doesn’t help either that it’s near impossible to have a normal conversation with Anzai. He always sounds like he’s on the verge of a breakdown. That’s not a good foundation for a fruitful relationship! Nevertheless, Tsukasa’s happy as a clam.

— Anyways, Anzai eventually forces himself into the raid despite Sawazaki’s refusal. Ishimaru, however, lets the half-devil come with them as long as he just plays the lookout. Jill probably also wants to join in on the fun, but she’s not as outspoken as Anzai. As a result, she just sits off to the side and looks unhappy. If you don’t speak up, don’t expect people to understand your feelings…

— When F Squad gets to CCC’s headquarters, it is strangely filled with dead homeless people. Not only that, this masked intruder conveniently makes his escape before the good guys even realize what’s going on.

— All of a sudden, transformed devils start pouring out of the woodwork, and the all-too-human Sawazaki and Ishimaru are in grave danger. Anzai feels as though he can’t abandon his true bros, so he decides to intervene even though he would get into huge trouble if the authorities ever found out. So what’s at stake? Well, he could very well be fired. Not only that, he would be quarantined from the rest of society. Yeah, that means not seeing Tsukasa for a long ass time. But hey, if you gotta save a friend, then you gotta save a friend. 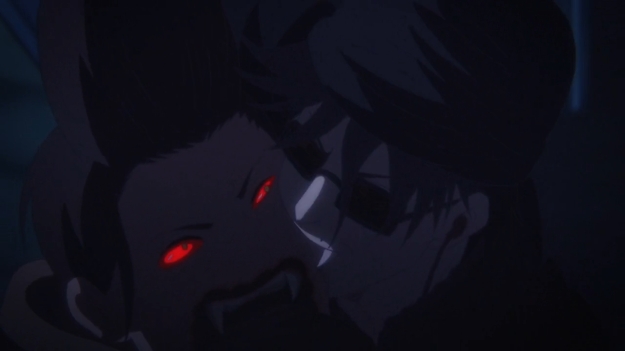 — Anzai doesn’t tip-toe around the problem either. He takes a huge bite out of one of the devils. Yeesh. He flat out kills them afterwards. I guess it wouldn’t have been practical to sedate them.

— The background check on Ishimaru arrives in the middle of all of this, and the gun is immediately turned on the guy.

— So what’s going on? Well, Kikuhara, a.k.a. Zero Two, knew that F Squad would come for the list eventually, so he laid a trap.

— Ishimaru admits that he’s none other than Jason, but he still insists on his innocence. After all, he’s really an undercover agent whose mission was to infiltrate CCC. He’s not the only undercover agent either! Dun dun dun!

— So Makimura is also one of the good guys. He even called the media here, because he intends on exposing CCC to the world. This is why I’m bummed that they left Sumimori out. After this whole incident, there’s a big side plot between her and Makimura. Then again, I doubt Devils’ Line is going to get a second anime adaptation, so it’s not like I’ll ever see that side plot get animated.

— Anyways, things fall apart for our heroes, because Kikuhara is one of those masterminds who is five, ten, whatever steps ahead of his enemies. As a result, this sniper immediately takes Makimura out (he’s only shot in the shoulder). Kikuhara then goes on to reveal that he doesn’t really care if CCC gets exposed. As long as people still believe that devils are dangerous, someone will always rise up to take CCC’s place. I guess he’s right about that.

— The big, bad villain then picks up a sniper rifle and looks across the gap to see both Zero Seven and Anzai. Who does he shoot? Our boy devil.

— With Anzai’s vitals dropping rapidly, Tsukasa has no choice but to break her one promise to him. Oh no! Well, tune in next week for the exciting conclusion to Devils’ Line. Well, not really. We’re nowhere close to wrapping up the story, ’cause honestly, the manga is nowhere close to being finished either. Just to put things into perspective, the adaptation will cover about 40 manga chapters. Next week’s episode will more than likely delve into Anzai and Kikuhara’s relationship. More importantly, however, the manga is only up to… chapter 57? So yeah, there isn’t even enough material for a second season. I don’t think I would really want to see one anyways. The effort put forth here has been pretty terrible. But I stop here. I won’t give a final grade on the show until next week.