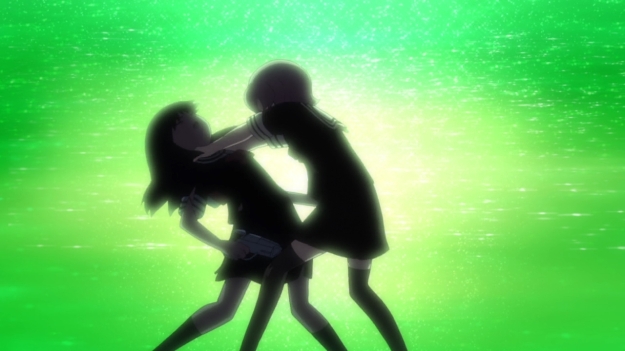 I’m just happy to remove this from my schedule. I’m sure some crappy summer show will happily step up to replace the gaping hole that Mahou Shoujo Site has left in our hearts, but I’ll worry about that when the time comes. Now, let’s wrap up Aya’s story.

— So there’s really nothing special about the King or the rest of the Administrators. Humanity is plagued by Bad Stuff™. But look, if we cast a really powerful spell that practically wipes out all of humanity, we’ll get rid of Bad Stuff™ and that’s Good Stuff™. Yawn.

— Since Tsuyuno is especially unfortunate, she gets to become an Administrator. I think that’s how that works. If I’m wrong, whatever. Who cares.

— Plus, they all have it pretty bad. Shouldn’t Aya also qualify to become an Administrator? Her life sucks. Yeah, present tense. It still sucks, yo.

— Eyeballs are creepy, yeah? So let’s stick one in our show. Becoming an Administrator isn’t really a choice. No matter what Tsuyuno wants, the King is going to turn her into one of those lame, black-and-white freaks. By the way, they’re all girls. No matter what it looks like, these dorks are all girls. The King is called the King, but it used to be a girl. I don’t know what this means, though. Sure, we could say that women in general have been treated worse than men throughout history, but I really doubt Mahou Shoujo Site is that interested in making any sort of social statement.

— So back in the real world, Aya sends the rest of her friends away, because she doesn’t want any of them to get hurt. This is what she had initially planned to do anyways. They only ended up in this predicament because the other girls had insisted that teamwork would somehow work. See? Screw teamwork!

— When Aya turns around, however, she sees that Tsuyuno is back and in charge! Hey, wait a minute, she looks nothing like Nana.

— It turns out Tsuyuno still has to pass one more test to become a full-fledged Administrator; she has to kill Aya. Look, this is just giving our heroine the opportunity to save her friend. You know exactly how this is going to play out now. You all do. Aya’s going to endanger herself in order to reach Tsuyuno’s heart, then Tsuyuno will snap out of her funk. Then together, the two girls will bring Nana down! But seriously, what’s the point of watching the rest of the episode if it’s going to be this predictable?

— Plus, when characters die in anime, I usually think there’s a good chance that they’ll come back. After all, most of these shows are not downers. Mahou Shoujo Site relishes misery, though. So it’s especially lame that Tsuyuno is going to somehow survive this whole ordeal. Like really? You’re going to torture the hell out of these girls, you’re going to go for a happy ending now? Haha, okay.

— No matter how many times I look at this, I still think it’s gross.

— Side note: Yakuza Girl still has her hands full with the massive throng of Absolute Units, but this time, she has help from Witch Girl.

— Back to Aya and Tsuyuno, however… hey, get down from there! Mahou shoujos don’t belong on walls!

— And now, we have black balls! Whee!

— Aya could honestly escape at any time, but of course, she’s going to stay and fight. She needs to help her frieeeeeeeend. But before we get on with the rest of the story, we need to sort out the B-plot.

— All of those clones can just pile on top of each other in order to chase after Yakuza Girl. But I mean, can nobody else see this? How is the rest of Japan not seeing this? Are you trying to tell me that there isn’t a single Japanese soul that is currently awake at this hour besides our mahou shoujos and these Administrators?

— It’s now a black penis with faces. How is it that no one else can see this massive black penis blocking out the sky?

— Eventually, Witch Girl drops Yakuza Girl off of a tall tower. I don’t know why she has to take off her shirt, though. Anyways, there’s a thunderstorm going — since when? — so Yakuza Girl is going to charge up her katana with the power of lightning. Why is she not getting shocked, though?

— And with her electrically-charged sword, Yakuza Girl slays the black penis! And no, this scene is not animated! You are staring at a still image! Good job, uh… who the hell animated this? production doA? I’ve never even heard of them. Oh well, at least the black penis is dead for good.

— Okay, let’s get back to the main attraction. Aya eventually ends up behind Tsuyuno and teleports both of them to…

— …the beach! Yeah! ‘Cause they promised each other to visit the beach again! See? Friendship! Pinkie promises! Surely, this will reach Tsuyuno’s cold, lifeless heart!

— When Tsuyuno fires yet another red marble — they’re actually reminding me of the Energy of Destruction from Dragon Ball — Aya teleports it into the sea. The resulting explosion creates a giant pillar of water and green light. Don’t you see, Tsuyuno? Don’t you seeeeeeee?

— Unfortunately, when Aya walks up close to Tsuyuno, her former friend starts choking her out. Even so, our heroine insists that she’s happy now. She doesn’t hate the world now. She doesn’t resent her life now. So she turns her stick on herself and this sends…

— And now, our heroine will save her best friend with the power of love! Love is literally shaped as a pink heart. Literally.

— Back in the real world, Tsuyuno snaps out of it, but oh no, maybe she’s too late! Nah. C’mon, this show wouldn’t kill off its heroine. Hell, the manga is still ongoing, so there’s no way Aya would bite it here. I just hate these cheap attempts at fake deaths, though. I’ve resented them ever since Final Fantasy IV.

— Together, Aya and Tsuyuno trap Nana in front of a moving train. All Tsuyuno has to do is let time flow again and the Administrator will bite it. I love how Nana doesn’t even look like herself here. Did my job, boss. Drew the villain.

— But with that, Nana is gone. In fact, the whole team managed to take down three Administrators in one night! Too bad there’s still a ton of them.

— Speaking of the other Administrators, they are all girls. Even this thing. Also, King isn’t the least bit fazed about any of the recent developments. I guess Nana isn’t all that important.

— I also like how the evil bully who used to relentlessly go after Aya is now friends with a girl who used to hunt and kill other mahou shoujos. I guess they’re good guys now. Er, good girls.

— We just have one last loose end to wrap up. Evil detective finally finds the time to pay Kaname a visit, and the evil brother is chained up naked in some sort of dark, evil dungeon. Also, the evil detective has an entire wall full of magical sticks. Oh, but the fun doesn’t stop there.

— Yep, the evil detective is about to rape Kaname in the ass. Why? Just because. I mean, what do you expect from this morally bankrupt show? Serial murderers like Rina just get to have a second chance. Meanwhile, Mahou Shoujo Site is confident that you won’t be outraged by Kaname’s rape, because he’s a bad person himself. It’s like how people like to joke about prison rape. People aren’t inherently evil, but they’re often too lazy to engage their empathy. They’re so afraid of feeling bad that they’d rather turn tragedy into jokes instead. And sure, dark humor has its moments, but a lot of times, that turns into crass disregard for human life. For instance, there’s nothing really funny about Kaname’s rape. For the most part, there’s only indifference.

— The episode ends with this stinger, but all I can do is roll my eyes. I know nothing about this loli.