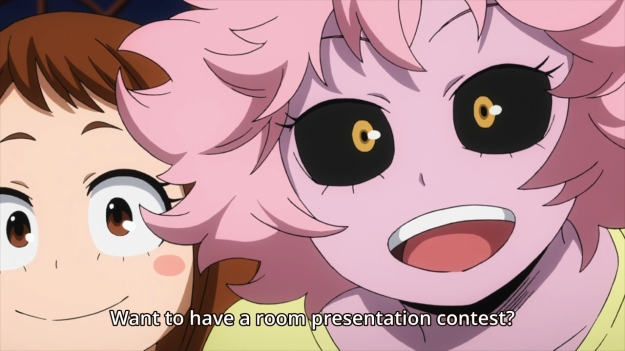 I put this week’s episode off until today, because I kinda knew it would be about nothing. Sure, it’s a fun episode for longtime viewers, but honestly, nothing really happens. You could skip this episode and not really miss a beat.

— But seriously, what kind of mother would she be if she didn’t have to worry? Mothers are designed to worry about their children. Most of them, anyways. Not all mothers are so loving, let’s just say…

— I really don’t know what dorm life is like in Japan and if it’s any different from how it is in the West. I just remember not being quite as awed as these kids. My first dormitory (oh San Miguel of UCSB) was lame and boring. I also wasn’t keen about sharing my room. Luckily, he dropped out after the first quarter, because he apparently couldn’t understand basic chemistry. But I digress.

— The lucky students of Class 1-A each get their own room. All their personal belongings have even been delivered directly to their rooms. I remember having to drag a stupid cart full of stuff up like eight floors. Ugh, I hate moving in general. That’s why I have been living in the same apartment for the past eight years now… 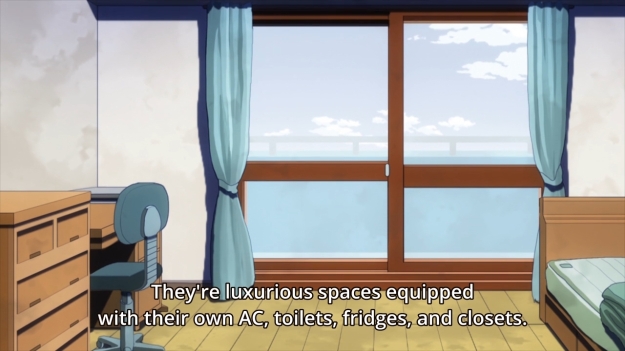 — Best of all, each room is equipped with air conditioning and a toilet. Dude… dude… When I moved into my room, they told us that we were too close to the beach to bother with AC. We all knew that was a lie. The university just didn’t want to pay for the electricity bill. And god, having your own toilet is always a billion times better than sharing one giant bathroom with a bunch of other guys.

— Before anyone can even step into the building, Aizawa spoils the mood. I’m not going to say whether or not I agree with him, because I think this topic has been discussed to death. I just think that it’s such an empty threat from the viewer’s perspective. You wouldn’t have a show if you expelled everyone, so I won’t even entertain the idea that he would’ve done this.

— Bakugo hands his best bud some cash as thanks. That’s something, I guess.

— Meanwhile, the expression on Kaminari’s face makes me wanna rewatch One Punch Man.

— I am also quickly reminded that Mineta is the worst. Bakugo is closely behind him, but you know who’s third? Iida.

— Anyways, the girls want to take a glimpse at everyone’s rooms. Sure, why not? It’s not like we have anything better to do right now. It’s the start of the new arc, so we’ve got tons of time to kill. God knows we won’t ever be killing any villains. 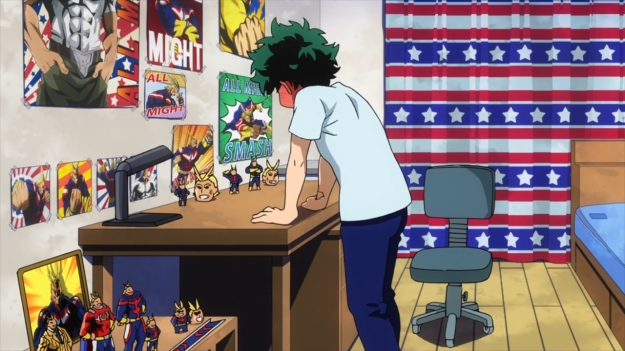 — First up is Deku’s shrine to All Might. He’s terribly embarrassed by it… 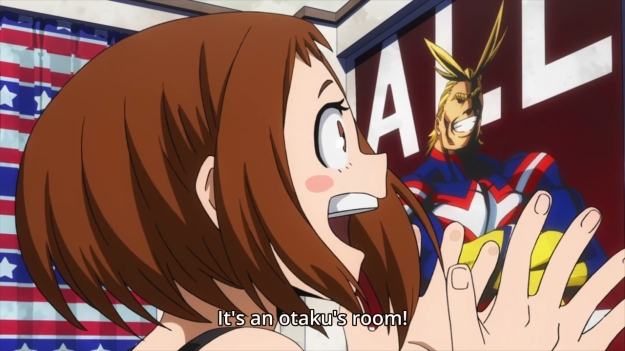 …but look, Uraraka isn’t even disgusted! 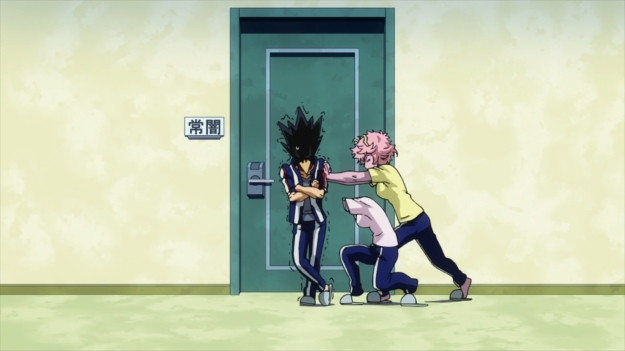 — Edgy Falco tries his best to block the girls from seeing his room, but why doesn’t he just lock the door? Surely, these rooms have locks. 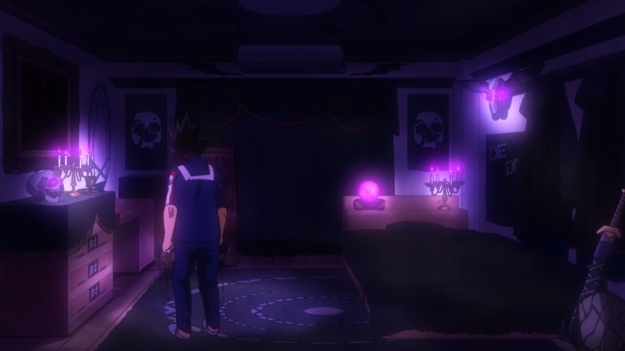 Needless to say, his room is lame. 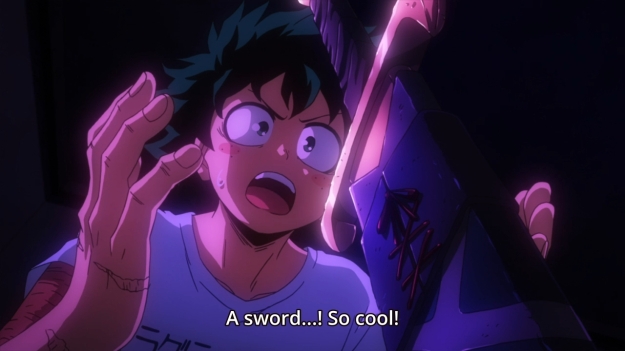 Is this sword a reference to some other anime? Sorry, I don’t go around memorizing sword designs. 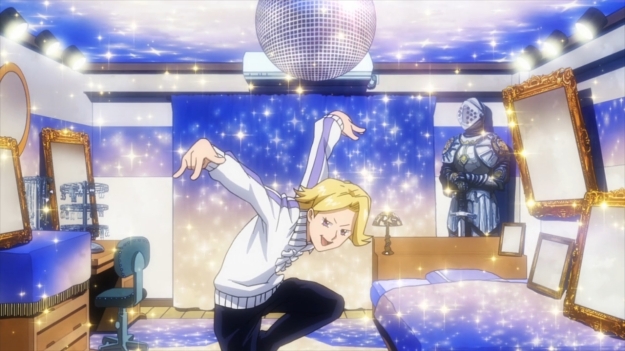 — Aoyama’s room is exactly what you’d expect. I wonder how he installed that disco ball, though. 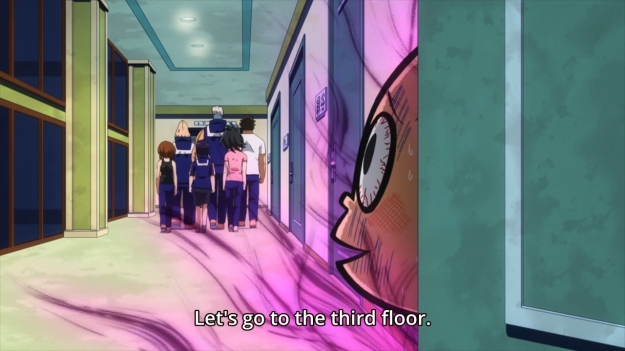 — No one wants to see Mineta’s room. Thank god for that. 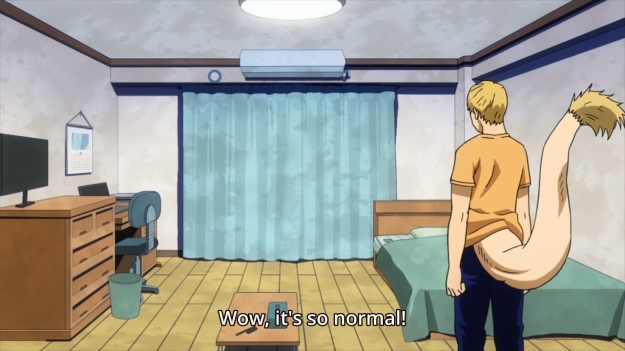 — Ojiro’s room is exactly what mine would look like if I still lived in a dorm. I don’t have posters and I don’t have random knick knacks. I like to keep things minimalistic. 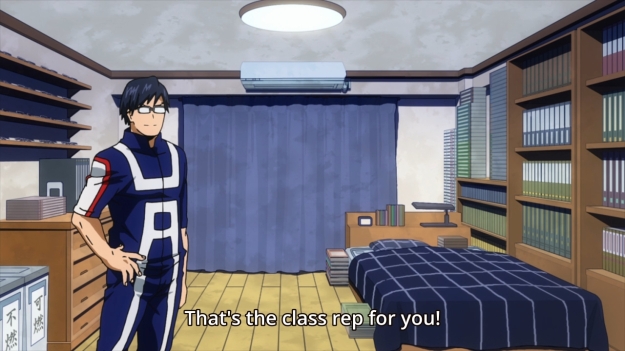 — Iida’s room is pretty normal for the most part. He’s got a ton of books, though.

And also a ton of spare glasses. 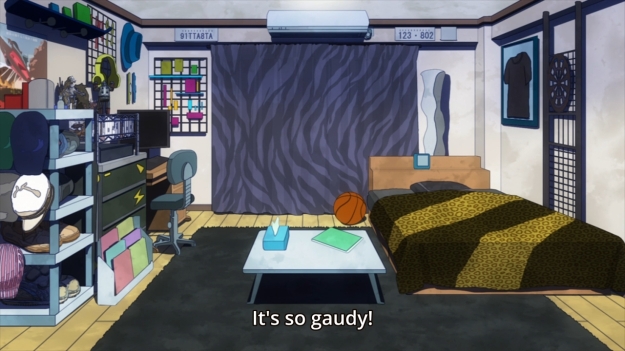 — I don’t think Kaminari’s room is really that gaudy compared to what we have seen and what we will see. 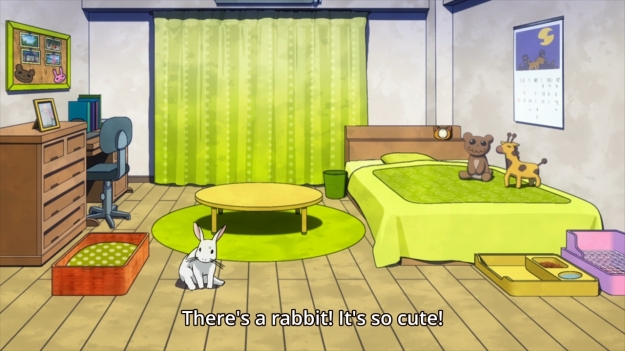 — Koda gets a pet rabbit, so I think he should win this contest. The stuffed animals on the bed are also disgustingly cute. 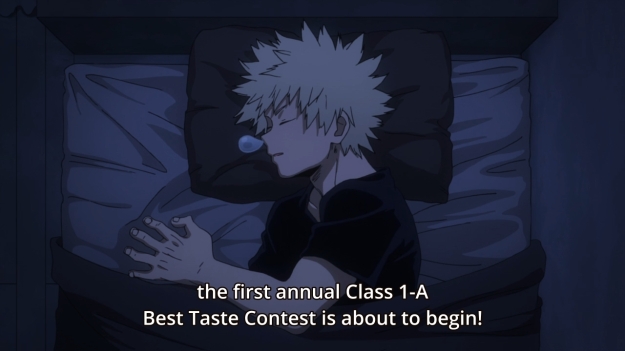 — Bakugo won’t be showing off his room, because he’s busy sleeping. I think he’s too young to be asleep at this hour, but whatever. I remember staying up till four or five in the morning just hanging out with people on the same floor, though. 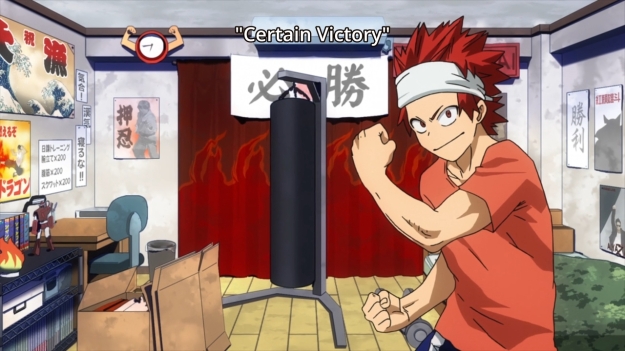 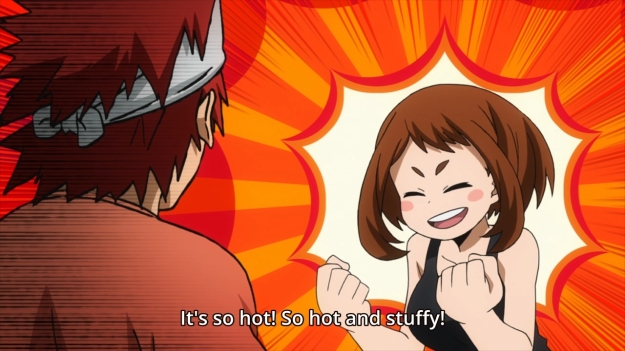 It even impresses Uraraka. Eh. 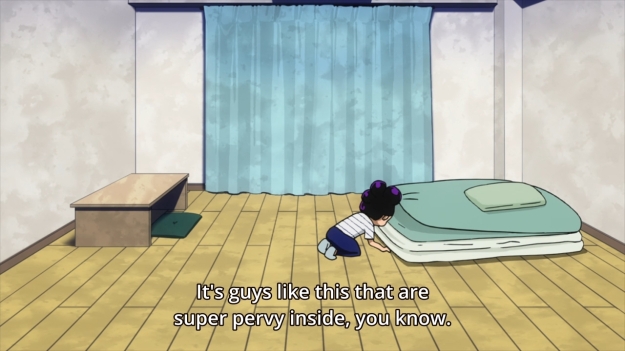 — Shoji takes the minimalism thing way, way too far. What did he even do to his bed? 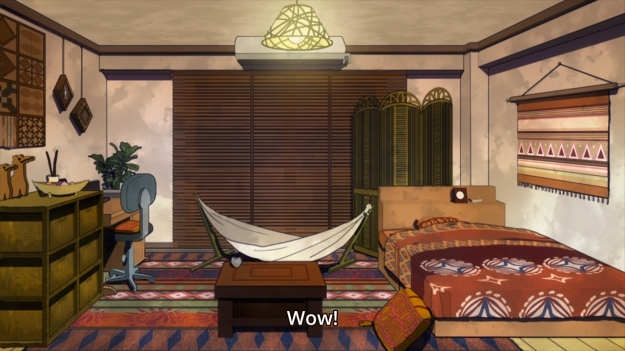 — I often forget that Sero even exists. I don’t care for the theme, but at least his room looks well put together. 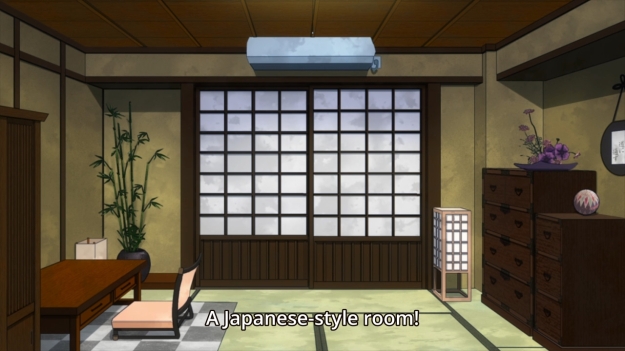 — Second to last for the boys is Todoroki’s ode to Japan. Fancy. All of the girls were super interested in seeing it, too. What a popular guy. 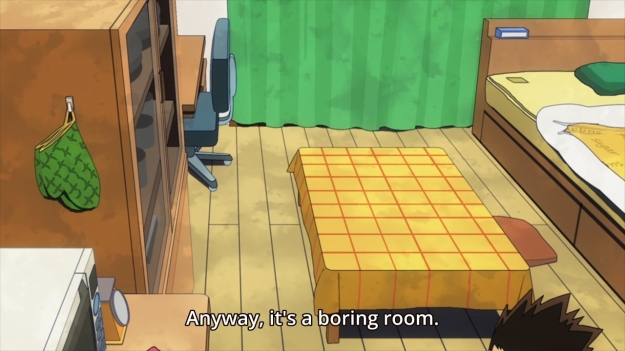 — Finally, we get to Sato’s room. It looks boring, but… 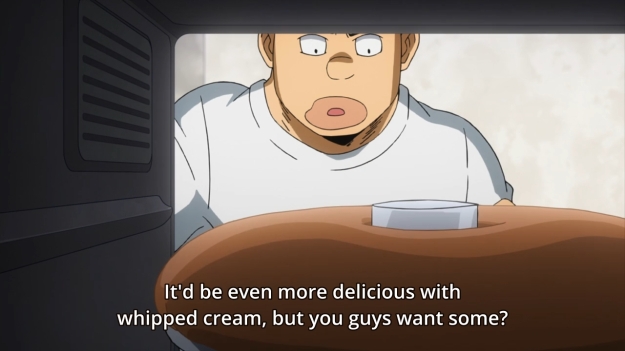 …he has a miniature oven for baking sweets. I’m surprised that this is even allowed. Back in college, they would’ve considered that a fire hazard. No cooking devices were allowed in any of our rooms. 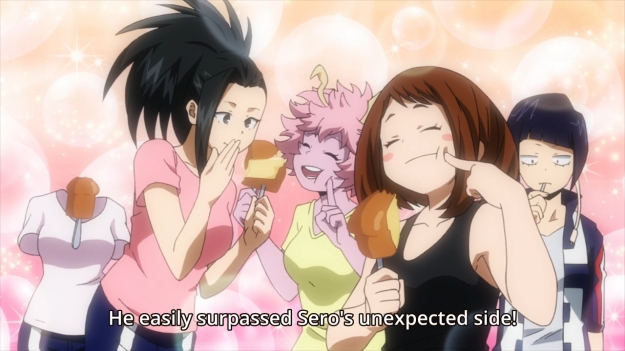 Sato predictably gets on the girls’ good side. 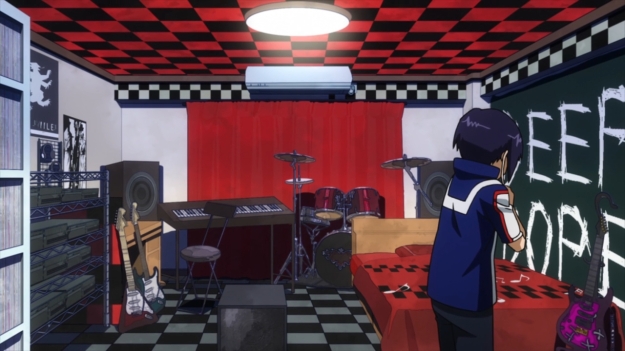 — It’s time to visit the girls’ rooms, but there are only six of them. Oh well. Jiro’s up first. Yeah, it looks neat and all, but how exactly does she expect to play any of those instruments in a dorm? Wouldn’t she bother everyone around her? 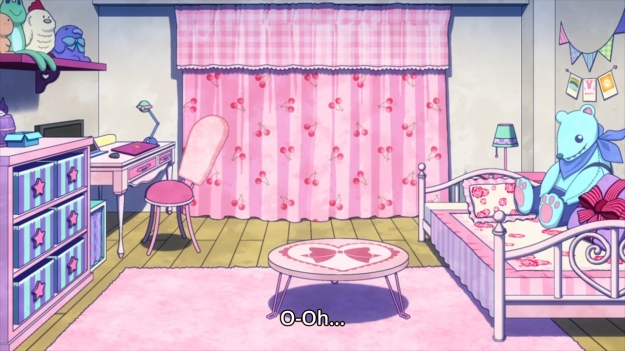 — Hagakure’s room is so… girly. I would’ve included a mirror just to fuck with people. 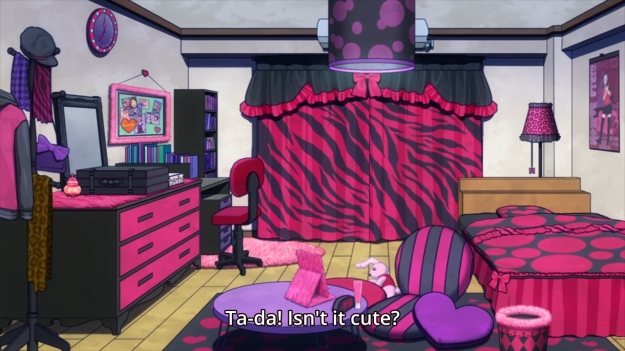 — We then get to Ashido’s room, and man, these kids love the color black to complement their primary color. 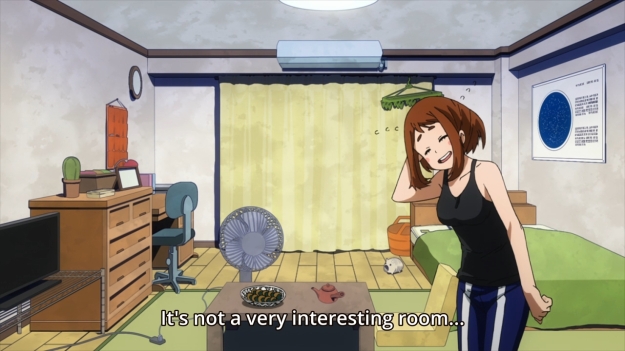 — Poor Uraraka lives plainly. But it’s okay, because she’ll be rich one day.

— Meanwhile, we don’t get to see Asui’s room, because she claims to not be feeling well. Obviously, something’s up, but I’m not disappointed that we don’t get to see her room. I know she’s a fan favorite, but she’s probably my favorite girl in Class 1-A. I don’t dislike her, but there’s nothing for me to like either. 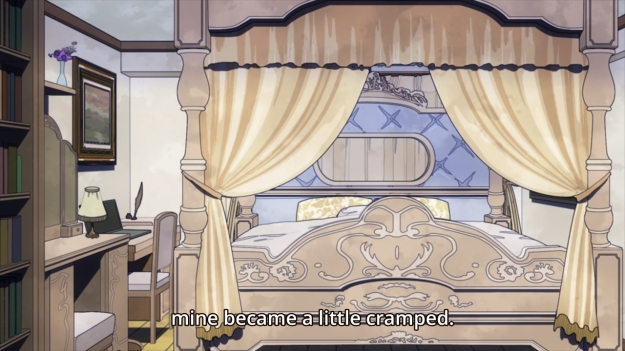 — Last but not least, rich girl Momo (it’s just easier to call her Momo than using her last name) is so sheltered, she didn’t realize her bed would’ve been too big for her dorm room. Oh well, at least her room isn’t an eyesore full of deeply saturated colors.

— In the end, Sato ends up winning the contest, because he had sweets. Yep. I would have given it to the rabbit guy.

— Then once all of the fun and excitement have subsided, Asui wants to speak to the troublesome five by herself. Y’see, back in the previous arc, she said that they would be acting like villains if they broke the rules. At the time, I brushed the comment off, because it just felt like a throwaway analogy. It turns out, however, that frog girl feels super guilty for having said something apparently so mean. At the same time, however, she was disappointed that she didn’t actually manage to stop them from pulling their crazy stunt. As a result, she didn’t feel comfortable pretending as though everything was okay again tonight. She didn’t feel comfortable hanging out with everyone. Not without apologizing first anyways. So y’know, Uraraka does her genki girl thing, then everyone else proceeds to comfort Asui. They promise her that they won’t do anything so reckless again (but I highly doubt that).

— As for me, I find this whole moment both super melodramatic and corny. I don’t really think Asui had said anything all that bad. Clearly, nobody even remembered what she had said. And honestly, I just don’t think it’s worth getting worked up about. Then again, everyone’s programmed differently.