With Yusuke as this week’s focus, Ren is starting to go through his friends’ stories like a hot knife through butter. But this time, CloverWorks finally decides to take some liberties.

— The episode opens with a pair of individuals being arrested. I’ve never heard of this guy nor his father. Maybe the game mentioned them on the TV at Leblanc that I rarely ever watched.

— In any case, Akechi dropping by the cafe and engaging Ren in an extended conversation is definitely new. It’s actually astonishing to me that the detective prince has so many fans outside of the game, because the game never really used his character to its fullest potential. I think the writers’ intent was to have him play a cat-and-mouse game with the Phantom Thieves, but that never really panned out. But with the adaptation, Akechi has a second chance to play a larger role. Big spoilers coming up for anyone who hasn’t played the game…

— More importantly, he has a second chance to convince us why we should give a shit about his eventual fate. That’s one of the things I never really understood. The dude had so many apologists inside and outside the game. Hell, your party members practically want to take him back with open arms. Fuck that. He’s a psychotic murderer. I don’t care if he was put on this path by an evil god and a terrible upbringing, he still had to pull the trigger. But anyways, like I was saying, if Akechi spends enough time with Ren in the adaptation, maybe we’ll have a stronger reason to care about him. I probably still won’t, but I have the luxury of knowing who he really is. He’s already scum in my eyes, but we’ll see.

— I like the chess board is obscured by the chair, because they don’t want actual chess experts to pick apart the game. Hey, don’t look at me. Like Ren, I don’t even know the rules of the game. I don’t care for board games. Never have, never will.

— You can never count on Ryuji to keep your secrets. The Phantom Thieves are getting popular by the day, and all this attention is getting to the kid’s head. The guy who has been seen as a delinquent and a loser all his life finally has the chance to be adored and worshiped by the masses. Is it any wonder that he often screws up? Ryuji’s still a big idiot though, so don’t get me wrong.

— Morgana also splits with Ren to hang out with Ann and Makoto. I think that’s also new. I don’t recall seeing this in the game. Also, Makoto has a very wide-eyed look for some reason.

— But like I said at the top of this post, this is a Yusuke-centric episode. Our eccentric boy is starting to realize that artists need to eat too. Nobody wants to sell out, but at the same time, nobody wants to starve to death and only be remembered posthumously.

— What’s new here, however, is Akechi’s huge involvement in the side story. This is fine, though. In the game, he never really shows off his detective chops. You are instead told over and over that he is brilliant. At least the adaptation is taking steps to remedy that. And y’know, should there ever be a remaster of the game, maybe we’ll get a more involved social link with Akechi. As much as I love the game on a sentimental level, it has a lot of holes.

— I never really understood how something like this could inspire Yusuke. But at the same time, I’m not an artist nor will I ever be one. The only creative thing I’ve ever done was write a few terrible short stories in my youth. And now, all I do all day is write unit tests… ho hum.

— You also don’t run into Kin-ki in the game. Instead, you fight a bunch of slimes. After all, the game doesn’t want you to wipe in the middle of a social link. The adaptation, however, wants to spice things up a bit.

— Ren summons a Lamia, so that puts him at around level 26 or higher. I don’t know why I’m keeping track of his progress. It just fascinates me for some reason.

— Anyways, Yusuke ends up producing… this black swirl. It looks bad, because it’s supposed to be bad. What I find perplexing is when he finally paints something that people actually like, but we’ll get to that at the very end of the episode.

— Kawanabe runs a foundation that supports aspiring artists. He wants to free them from their stifling financial burdens. At first glance, however, it would seem as though he’s only interested in Yusuke for the kid’s notoriety. Obviously, our artist isn’t pleased about this.

— Geez, Akechi, don’t you think you’re being a little clingy. 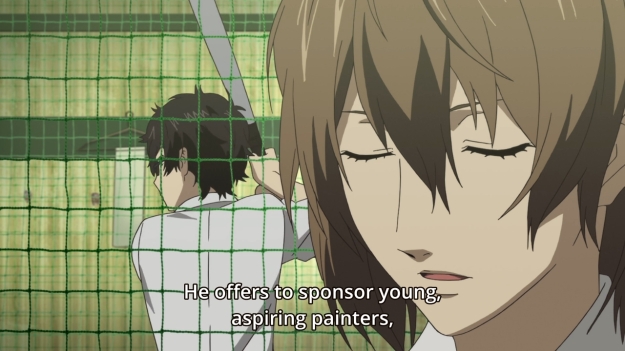 — In any case, the detective prince starts telling Ren all about how there’s shady business surrounding Kawanabe. Afterwards, we even see them working together as they try to crack the case. This is definitely an anime original side story. There’s nothing evil at all about the man in the game.

— Ren hits a home run and reminds me that I never bothered with the mini-game. It’s just not my thing. I love baseball, though.

— We proceed to get a very abridged version of Yusuke’s social link, including everyone’s favorite moment. Hifumi even gets a cameo. In the end, however, Yusuke is inspired by his dearest friends. There’s nothing inherently wrong with desire! Art is subjective! Last but not least, you have to fight for others! As a result, Yusuke decides to inject a little hope into his paintings.

— But before his latest piece is revealed, Ren looks as though he’s trying to confront Kawanabe by listing off a bunch of damning names. The old man, however, acts as if he has no idea what our hero is talking about.

— Later that night, we get our plot twist. So like the game, Kawanabe is completely innocent. Instead, his right-hand man is the corrupt individual! So we didn’t take too much liberties with Yusuke’s story, but we did give Akechi something to be happy about. He gets to catch another criminal and look good in front of Ren.

— At the latest exhibit, Yusuke reveals his triumphant painting. He titles it “Desire and Hope.” Again, I’m not an artist, and I had a terrible time with my art electives in college. I’m sorry, but art history bores the fuck out of me. All those names and dates to remember about some random fucking triptych…. who the hell cares? My point is, I just want to establish that I’m not an expert. So with that out of the way, I gotta say that I have no clue how a painting like this can actually win anything. I think it’s fucking terrible.

— Like in the game, Kawanabe reveals that he was just trying to goad Yusuke all along. More importantly, he’s seen Madarame’s good side, so he can’t fully condemn his former friend. Even if the disgraced artist was evil, he still raised Yusuke like his own son… or something. I mean, freaking out over the kid’s health once isn’t going to change my mind, but let’s just play along.

— Anyways, Kawanabe doesn’t want other artists to succumb to their greed like Madarame. As a result, he offers Yusuke his foundation’s support once more. Our eccentric boy, however, believes in not only himself, but his friends as well. He won’t ever turn to evil, because the power of friendship is just that awesome. But hey, maybe he’s right. All of the bosses in the game were probably loners. Could you imagine anyone being friends with Kamoshida? He had butt-kissers, sure, but genuine friends? Probably not. The same goes for the rest of them. So pay attention, kids! If you’re a loner, you’ll probably have your own kickass palace where all your fantasies come true. Like Ann in a bathing suit. Wait a minute…

— Next week looks to be another Makoto-centric episode. Sure, we just spent a bunch of time with her, but she still needs to ask Ren to teach her about love. I kid, I kid… the adaptation probably wouldn’t include that scene.

— In the after credits scene, Ren actually shows us a bit of his personality. It appears as though he had deduced a while ago that Kawanabe was innocent. As a result, he was really trying to rattle the old man’s second-in-command. It then looks as though Ren manages to beat Akechi in a chess match as they engage in a verbal duel over the Phantom Thieves’ brand of justice. I mean, just look at the way he is sweating: 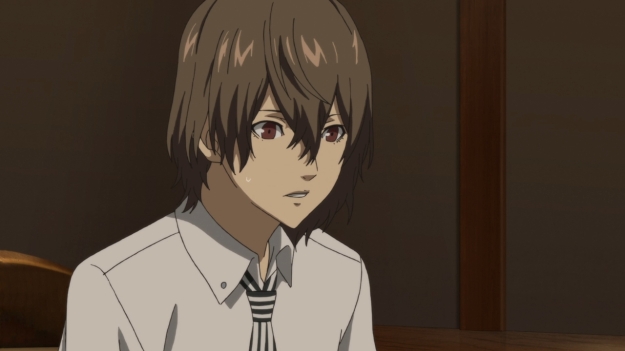 — I think this episode is fine. Nothing mind-blowing, but I actually like the changes that CloverWorks made to Yusuke’s side story. In the game, Ren never really shows off his smarts. The anime, however, wants to prove that the main character can stand toe-to-toe with the detective prince. Time will tell if CloverWorks can be successful with this endeavor.

— That’s it for today’s updates, though. Tomorrow, I’ll get to the latest My Hero Academia episode, then I’ll wrap everything else. Hopefully, I’ll get to watch the Hisone to Masotan finale by then.

14 thoughts on “Persona 5 The Animation Ep. 13: Maxing out another confidant”