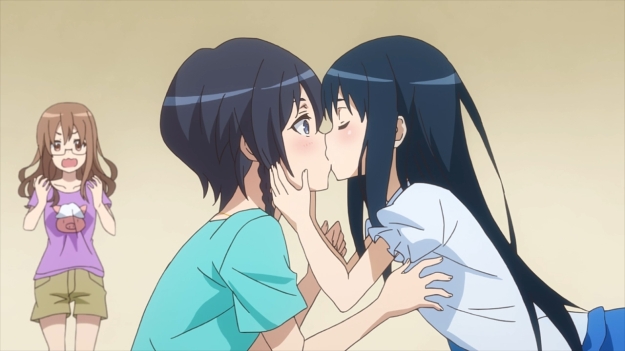 — So no cold opening this week, ’cause we mean business (not really).

— Pito tells Karen that only the latter could’ve pushed her to her limits, which is funny ’cause I remember our heroine missing some point blank shots in last week’s episode. And is Karen honestly that good? Or does she just milk her unfair avatar to its fullest?

— This episode has pretty lousy animation for a finale, but maybe we can hand-wave this away by blaming everything on Karen’s video card. Yep, the “graphics” just suck, because our girl needs to upgrade her rig!

— Haha, yeah, SAO sure did suck, didn’t it? Even our loli heroine from a spinoff is smart enough to see that.

— But for some reason, calling SAO a shitty game really pisses Pito off. I guess she just wants to die that badly. There are certainly people out there always looking for a thrill. What if there was something like an underground VR MMO scene? Just people trying to relive SAO, because they can’t get their rocks off without the looming threat of actual death. That would be kinda fun to explore.

— Karen’s avatar is amazing. It can shrink and enlarge depending on the situation. I’m in awe. Or maybe her graphics card is just screwing up again, wink wink.

— At one point, Pito grabs P-chan and turns the gun on Karen. But there’s no way P-chan would betray her precious loli owner!

— Right on cue, P-chan starts talking to Karen… or maybe too much VR MMO gaming has turned our girl’s brain into mush. Either way…

— Karen realizes that there’s no bullet line coming from P-chan. When Pito pulls the trigger, the pink gun blows up in her face. Wow, I was just making a joke, you guys. I wasn’t trying to seriously suggest that the gun would literally insist on mamoruing the fuck out of Karen.

— After a quick tussle, Pito still gets the upper hand on Karen. She then tells M to come out of hiding with Miyu. At first, it looks like our villainess is going to kill Karen’s best friend first, but instead, she turns on M. She just realized that M has been doing all he can to ensure that she and Karen could have their one-on-one duel. To Karen, this is apparently M’s deep love for Pito. Uh, sure.

— And right before Pito caps M in the head, he confesses his love. Okay.

— Pito: “But you’re not allowed to bring love into the game.” Hear that, Kirito and Asuka? Cut it out, you weirdos. No one ever falls in love in MMOs. No one.

— And now it’s Karen’s turn to overreact. After M dies at Pito’s hands, the loli screams, “You’re unbelievable, you demon! Devil! Grim reaper!” C’mon, what loving gaming couple has not killed each other in a game? Tell me that!

— All of a sudden, Pito starts singing Der Erlkonig, which is just based off of a poem by Goethe anyways (which, in turn, is inspired by something even older). The poem is about a father rushing to get his delirious boy somewhere on horseback. The kid keeps telling his father that Erlkonig is after him, but of course, the man sees nothing. At the end of the poem, the kid is dead. How does this apply to Pito? At this moment, she represents the grim reaper to Karen, but in real life, the situation is entirely different. She’s afflicted by mental demons that others cannot see. She needs to do something about her obsession with death, but nobody can help her if they don’t understand her. But apparently, if Karen can show Pito that life can be just as thrilling without dying, then the latter will just stop being such a nutjob. I think that’s dumb, but whatever.

— Anyways, Miyu has a knife in her hair, so she uses that to free herself. She then charges at Pito. At the end of the day, however, the two lolis know that the kill belongs to Karen. As a result, Miyu frees her best friend by cutting her VR hands off. That’s a neat trick.

— The pink demon then starts biting Pito to death. No, really. I mean, since our villainess only has 20% of her HP left, I guess you could kill with loli bites. If you’re in critical health, a chihuahua could probably beat you up too.

— As the last seconds of Pito’s life ticks away, Karen tells the girl that it’s just a game. C’mon, it’s only a game, so chill. Chill with all this stupid dying stuff.

— M is totally grateful for this, by the way. So grateful that he must have spammed /cry in the game.

— Man, what a bunch of party poopers: T-S crashes the party and mops up. As a result they get to win the second ever Squad Jam. A victory’s a victory, but no one’s going to respect that.

— In the aftermath, Karen thanks all the high school lolis by buying them a bunch of cheap snacks. They return the favor by getting her a heart-shaped necklace for her birthday. Geez, the gifts are a little lopsided here.

— Afterwards, Goushi, a.k.a. M, takes both Karen and Miyu to see Pito in real life. Look, we all know it’s Elsa Kanzaki. This is like the worst kept secret ever.

— This is exactly what a dangerous person would say.

— Minors? Well, she’s right. Apparently, you’re considered a minor if you’re under 20. Karen’s about to graduate to adulthood, but she’s not quite there yet.

— We still got a bunch of time left in the episode, so Goushi decides to regale us with the oh-so-romantic love story about how he and Elsa first met. The man used to be fat… like super fat.

— He also used to stalk Elsa, but then she turned it around on him by beating and berating the shit out of the guy. Afterwards, he became her manservant because he likes being mistreated. Yeah, I don’t know either. At some point, he lost a bunch of weight.

— Goushi is still trying to pretend as though Pito isn’t really Elsa, so he tells Karen that Pito owns a music club. In any case, we get to watch a private Elsa concert.

— After the terrible concert, this woman pretends to be Pito, but Karen walks right past her to Elsa. We all know Pito is really a loli in real life. C’mon, this is SAO Alternative‘s shtick. It’s a lolipalooza. The show is so obsessed with lolis that even the super-tall Karen wants to be one.

— Anyways, Karen has known for a while now that Pito was none other than Elsa. After all, it is the worst kept secret. But seriously, who else would’ve known about LLENN? 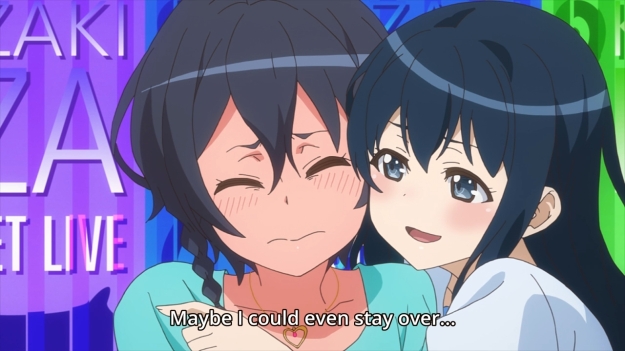 — Elsa proceeds to put the moves on Karen, but Goushi isn’t even fazed. He’s a fanatic, so he’ll love whatever she does. If Elsa wants to dump him for a woman, he’d love that too.

— In the after credits scene, we see Karen and Elsa hang out in GGO, but there really isn’t much more for the story to say. Elsa merely tells her friend that she no longer cares about dying. She can have fun in other ways. Sure.

— So… yeah, that’s Sword Art Online Alternative: Gun Gale Online for ya. It’s not as bad as SAO, but I mean, it’s not as interesting either. None of the characters are all that interesting. For instance, Karen’s complex was just an excuse to make her a loli. As soon as she won the first Squad Jam, her complex pretty much disappeared from the story, and she barely had anything else going for her. As for Elsa/Pito’s obsession with death… god, I don’t even know what to say about that. It was never really fully developed, then it went away just as easily as it had arrived. All in all, the show’s pretty mediocre. I don’t know why people are so impressed by the action, because it’s pretty average if you don’t know anything about shooters. If you do know anything about shooters, however, you’d quickly realize how unrealistic the whole thing is.

— Last but not least, I wouldn’t really want a sequel to this show. I don’t hate the girls, but the story doesn’t exactly give them a lot of room to breathe and grow. Unlike SAO, it doesn’t look as though Karen would ever be interested in trying other games. Even though she’s no longer really depressed about her height in real life, she gives no indication of branching out. As long as she still has that loli avatar, she appears to be a GGO gamer for life. But that’s precisely the problem, because GGO sucks ass. A sequel would just mean another shitty Squad Jam. Do you want to watch another Squad Jam? ‘Cause I don’t.

4 thoughts on “Sword Art Online Alternative: Gun Gale Online Ep. 12 (Final): We all know what you guys are here for”