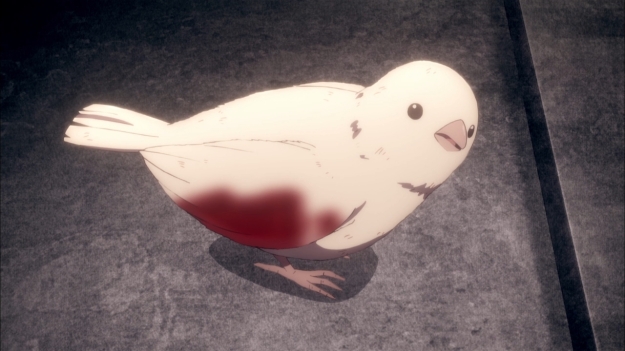 Don’t worry about the cute bird. I’m sure it’ll be fine.

Welp, that’s a lot of blood for one bird. But don’t worry, ’cause we can fix it right up.

See? All better. Anyways, the basic gist here is that Rachel, our heroine, regains consciousness only to find herself on the bottom floor of some massive subterranean building. All she can remember was coming to the hospital after seeing some people die (probably her parents), and all she wants to do right now is to get back to her dear parents. But judging by the series 16-episode length, Rachel won’t find it easy to escape from whatever hell she’s in. The floors are all bizarre, too. B6 is set up to look like a series of dark, scary alleyways. B5, however, looks like a hospital. On each floor, there appears to be a deranged resident. B6 has a dude covered from head to toe in bandages. He’s deadset on killing Rachel, but only if she’s scared. If she isn’t scared, he quickly loses his interest. On the other hand, B5 has a untrustworthy doctor who covets Rachel’s eyes. Sadly, his portrayal is more hammy than creepy. In addition to the lunatics, Rachel often finds cryptic (Engrish) passages written on some of the walls. Good luck deciphering them. Just to make you feel a teensy bit less safe, there are video cameras everywhere watching the girl’s every move. Last but not least, a woman’s voice rings out from the many loudspeakers, informing everyone that Rachel has been selected as a sacrifice. A sacrifice for what? Pfft, don’t ask me. You think I can solve this mystery with the scant amount of information that we’ve been given? I wish.

I was lowkey intrigued by the first five minutes of the anime, but then Isaac (I think that’s his name) had to show up and start ranting and raving like a generic horror lunatic. As he was stalking and skulking around for Rachel, I was suddenly reminded of the Clock Tower series, those Japanese horror games where you often play as a defenseless maiden doing her best to hide from Scissorman. Unfortunately, Isaac wields an edgy scythe and talks too much. The real problem is that he even talks at all. Still, the fact that the anime reminded me of Clock Tower couldn’t have been an accident, so I decided to look into the show’s background. Well, what do you know? Angels of Death is actually based on a freeware game created from the RPG Maker engine. This opening episode just had that certain je n’ais se quoi, y’know? The nonsensical set-up, the heavy reliance on impossible space, the main character with their missing memories, riddles that you’ll have to piece together, etc. — it all screamed cheap, indie horror game. You can even get a translated version of the game off of Steam for the low, low price of $9.99! I’m not going to do that, because every single gameplay video of it looks completely unappealing. Plus, 2-D horror has never scared me. Still, if you want the proper Angels of Death experience for yourself, just know that the game is out there. I’ll try to enjoy the anime adaptation instead, which won’t be easy. 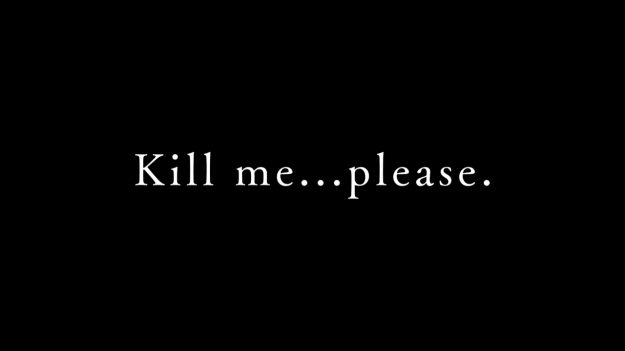 I can, however, agree with that.

Chio just wants to get to school on time, but she always seems to find herself in ridiculous or uncomfortable situations. In this opening episode, our heroine has to hop across rooftops like Ezio from Assassin’s Creed. Along the way, she has to dodge various suburban threats like an old man brushing his teeth. The last thing Chio wants to do is call attention to herself. Let’s just say she has quite an overactive imagination. Blame it on her gaming addiction. She apparently stay up til 4:30 in the morning just to beat a level in her favorite game.

With comedies, there typically isn’t hype action, deep characterization, profound subtext, or whatever it is that you might enjoy regardless of a show’s overall quality. You either laugh or you don’t. I find Bo Burnham incredibly funny. Others don’t. That’s fine. That’s just how it is. Sure, every so often, you get something transcendent that can combine comedy with other storytelling elements at a high level (for example, I would nominate Kung Fu Hustle), but this only happens once in a blue moon. Unfortunately, I don’t share most anime comedies’ sense of humor, so it doesn’t surprise me at all that Chio’s School Road‘s first episode did nothing for me. Not once did I crack a smile. Still, I’ll give the show another shot. Maybe I’ll find it a little more entertaining when Chio and her friends stumble into even crazier situations. I doubt I’ll keep writing about the show, though.

Welcome to yet another sports anime. There’s always a character who used to play the sport at a high level, but quit for some reason: 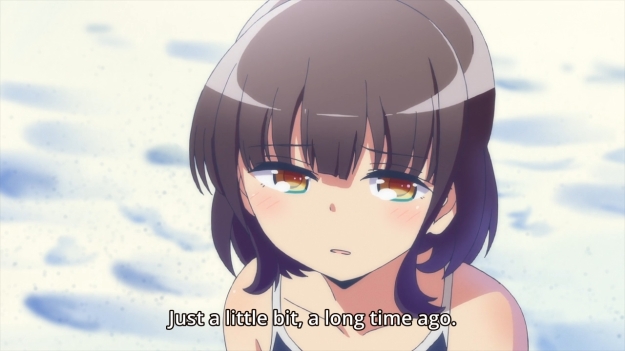 I really hope it doesn’t have anything to do with her dead mom, but it’s starting to look that way. In any case, Haruka, our happy-go-lucky heroine from the mainland, gets to try and unlock the secrets of her Okinawan cousin’s troubled heart with her warm, gregarious nature!

But that’s not all, folks. In sports anime, there’s also always a prickly character who takes the sport way too seriously: 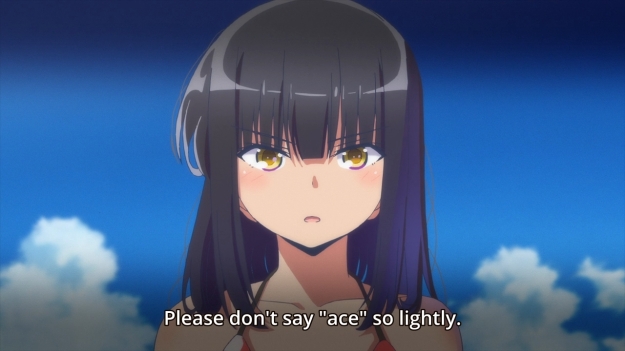 Chill, Michael Jordan. It’s okay if a newbie doesn’t fully understand your precious sport. But try as she might, Narumi can’t scare Haruka away from the game. Our girl’s too just too cheerful and enthusiastic that she even enjoys losing 0-7!

Yeah, you go, girl! Split that ass in half some more!

Anyways, Harukana Receive has far superior eye candy to Hanebado! For instance, Haruka doesn’t actually have twigs for thighs like most female anime characters. But at the moment, I’m just not feeling the drama. Our heroine has to practice hard and impress Narumi, because… because… I dunno, I guess we just care what Narumi thinks. And in the process, Haruka will help Kanata rediscover her love for volleyball. Yawn. But moving on, I also don’t think its sports action is anywhere near as good. For instance, what is this sand effect?

C’mon. The bigger problem for me, however, is the episode’s heavy reliance on slo-mos.

Volleyball is already one of the slower sports out there, so I felt like I was watching a bunch of hot girls drag themselves through molasses. I’m sure there’s a certain appeal in that, but as far as the sport of volleyball is concerned, I was left underwhelmed. Hopefully, once Haruka gets up to speed, the game’s pacing can keep up. Depending on how the next two episodes play out, I might continue blogging this along with Hanebado! 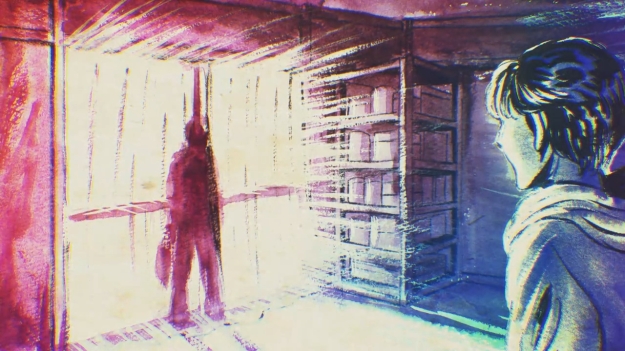 Less than five minutes per episodes? Man, that’s not enough time to get scared. Unfortunately, I don’t think it’s worth covering this show.

Imagine being so disillusioned with your life as a businesswoman in Japan that you’d rather waste your life away in a fantasy world based off of a gacha game. 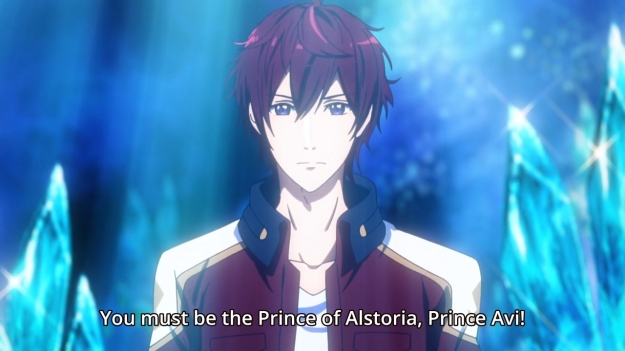 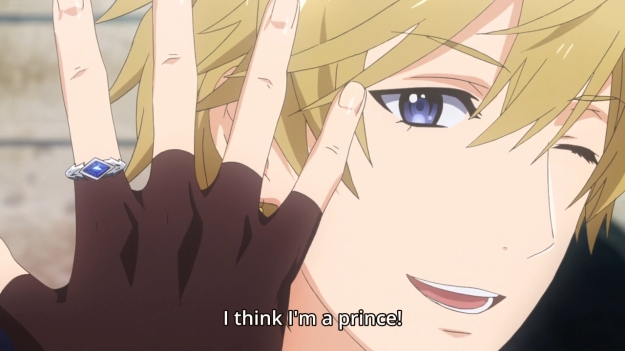 How many rings can you collect? How many hot princes will you meet! Good lord. I don’t even think the poor girl gets a name. Everyone just refers to her as Hime. If you wanna do an isekai with a female MC, at least give her a proper identity. Sadly, she’s even blander than all the demon lords we’ve been getting lately.

I mean, just look at her dorky face. She’s clearly meant to be an unassuming blank slate. Anyways, I definitely won’t be blogging this. If I need to cover a reverse harem at all, I’d rather waste my efforts on Phantom in the Twilight.

3 thoughts on “What I Watched Today: Too many shows to list”