For once, I get to use the word “smash” in conjunction with a show full of high school girls and not sound like a pervert.

— The match between Ayano and Nagisa is underway, and our lefty is winning easily. She’s not shutting her opponent out, but her defense is apparently impenetrable. At one point, however, memories of that woman comes flooding back, so she stops playing all of a sudden. Memories of… her mother? Yeesh, her mother abandoned her? Well, yeah, that’s a good reason to quit. I’d quit too in her shoes.

— Even though Elena dragged Ayano into this mess, the latter is still very polite to her friend. I would have just stormed off. Her best friend then announces that she’s going to serve as the team manager, and… well, I guess that’s that. Ayano joins the team just because Elena is in it. That’s weird. I wish the story would’ve given us a better explanation than that. Hell, just give us any explanation period.

— Let’s just say Elena isn’t here because she cares about badminton. She’s got other things on her mind. It looks like she just wanted to help her best friend rediscover her love for the sport, which is sweet, I guess…

— Meanwhile, Kentarou won’t just serve as the girls’ coach. He’s also going to moonlight as a therapist. He won’t solve Ayano’s personal issues this week or maybe even next week, but don’t you worry! He’s going to get to the bottom of it!

— After all, this week is still all about Nagisa and her issues. We’re told that the tall girl has been slumping lately, but she still manages to beat Riko, her best friend, 21-19. Yeah, that’s a close score, but a win’s a win. 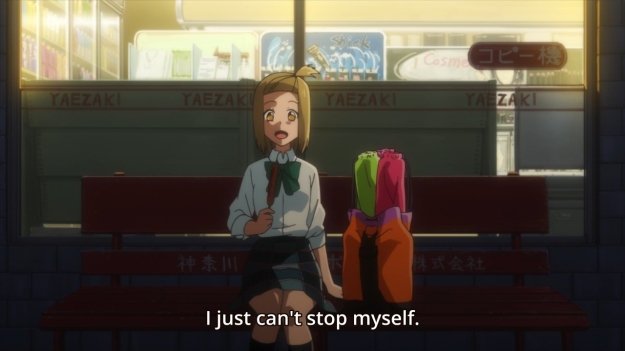 — This episode has a running gag where Yu, one of the girls on the team, always munches on meat immediately after practice. This also lets her catch up with her former teammates. Meat’s good and all after a workout, but she needs some carbs especially since there’s so much cardio in badminton. Just sayin’…

— The next day, Kentarou has Ayano and Nagisa team up for a game of doubles. As you might expect, the two girls can’t play together whatsoever. The coach, however, seems to pin this on Nagisa. She’s too hellbent on doing everything herself that she won’t rely on her teammates. Ah, the Kobe Bryant problem…

— When Riko swaps in, we see her yielding on a shot that she can’t properly reach. This should help open Nagisa’s eyes, but unfortunately, she just gets petulant. She accuses Kentarou of using her just to make the star player (Ayano) look good. I mean, on the one hand, Ayano didn’t seem to get any criticism. She was bumping into Nagisa, too. But we don’t get to watch the whole match, so we can’t really tell whose fault it is. We just have to take Kentarou at his word. And because Nagisa has been a bundle of negativity lately, it’s easy to pin the blame on the girl. She’s obviously in the wrong, right?

— I’m more surprised at the fact that Kentarou isn’t being tougher on the girl. She’s so toxic to her own team, but he’s still going to take the softie-softie approach. Sure, there’s more than one way to skin the cat, I almost feel like everyone’s coddling her feelings. I guess I’m more used to direct confrontation from my coaches.

— A flashback of sorts reveals that people have always overlooked Nagisa’s hard work. Even though she trains harder than everybody, they attribute her success on the court to her height and her height alone. As a result, she tries to practice even harder to prove them wrong. At some point, however, I have to wonder where the adults are. The adults are supposed to set good examples. The adults are supposed to squash all this problematic attitudes and set the kids on the right path. Unfortunately, it really seems as though Kentarou is the first positive adult role model to enter these kids’ lives.

— Speaking of which, I want to go on a tangent and talk about League of Legends for a bit. I notice pro players can get really torn up after a loss. A good percentage of them can also be really toxic in general. And when you really think about it, you come to the realization that most of these kids have never grown up in a proper team environment by the time they become pros. It’s so much different with football, basketball, or baseball. You have to learn to play with others from a young age in those sports. In League of Legends, you hone your talents in solo queue until somebody notices you, then you are dropped into a team with four other socially stunted individuals. It’s hard to learn good sportsmanship on the fly.

— There’s some teamwork in badminton and tennis if you play doubles, but if you’re a singles only player, then what can you do but rely on yourself? It’s not really a sport that’s as naturally conducive to teamwork as, say, football. As a result, you need a strong guiding hand, but who was the previous coach until Kentarou came along? Shrug.

— In the locker room, Nagisa asks Riko if the latter had taken it easy on her in their last match. Y’know, the one that Nagisa had won 21-19? Apparently, Riko’s not so bad at the game herself. But to protect her best friend’s feelings, she threw the game. Why is everyone coddling Nagisa? Athletes, especially talented ones, need to learn to lose and lose humbly. When she lost so badly to Ayano, someone should’ve been there to help her learn the right lessons from the lopsided defeat. But again, we have no clue who was coaching these girls back then.

— Afterwards, Nagisa enjoys some meat with Yu, but lashes out when the other girl doesn’t use the right words in an attempt to praise her natural talents. This catches the upperclassmen’s attention, so they stand up to her and tell her off. More importantly, one of the girls says that she wasn’t actually envious of Nagisa’s height. Rather, she was envious of the girl’s love for badminton. Oooooh.

— Y’know, the drama here might be a bit overwrought at times, but I kinda like it. It keeps me interested in the show. The thing is, I don’t know a damn thing about badminton. I’ve never played it. I played tennis in high school, but the two sports aren’t very similar at all. It looks like you need a lot quick reflexes in badminton, but whatever. My point is that I don’t actually understand the sport, so that’s not where I can derive my enjoyment. As always, it’s about the people. The characters and their conflicts need to be compelling. Sure, Hanebado! is laying it on thick, but this sports anime is a lot more compelling than a lot of the recent ones I’ve tried to watch.

— And honestly, I’ve always watched sports for the narrative. I like baseball because I can track a player’s career through the minor leagues to the big show. On the other hand, I can’t enjoy soccer, because I know nothing about the players or the history of the sport. I don’t have a narrative to latch onto, and just watching the sport by itself is not enough for me.

— The next day, Kentarou challenges Nagisa to a one on one match. For some reason, she tries to brush him off even though he’s a former Olympian. Like shit, don’t you think you could learn a thing or two about a guy who actually went pro with the sport?

— Needless to say, he can read her every move on the court. He can tell exactly why she’s missing her shots. Even though the girl’s strength lies in her smashes, she’s pulling her punches in order to attain more control. Unfortunately, being a jack-of-all-trades usually doesn’t pay off.

— And then… it’s therapy time. Kentarou can guess that others have derided the girl for her height. Maybe he’s gone through the same thing. Still, he acknowledges her hard work, and… well, just look at her. Jeez, I didn’t expect him to get through to Nagisa so quickly.

— After being thoroughly humbled but properly support at the same time, Nagisa suddenly does a 180 in her personality. Not only does she apologize to her team, but she’s beaming as she encourages them to work hard together for the upcoming prelims. I just think this happens way too fast and way too easily. Like shit, couldn’t the story have given her a night to reflect on everything before having Nagisa just change wholesale on us?

— Yu then gets her sausage eaten by all of her upperclassmen. The girl just can’t catch a break.

— But yeah, like I said, I’m enjoying Hanebado! more than I expected. For now, anyways. It’s a bit heavy-handed, but I prefer the show to err more towards drama than, well, nothing. Also, the animation has been pretty solid. That always helps.