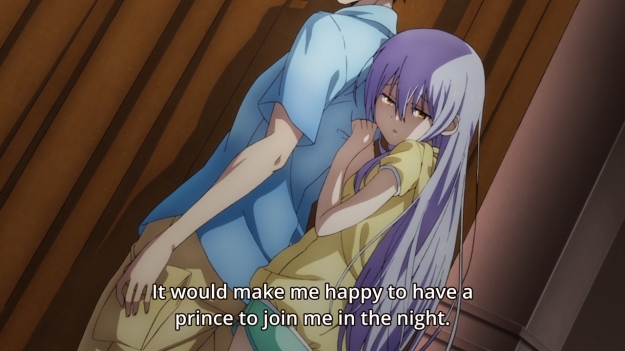 Now that the story has gotten settled in, it’s proven itself to be quite dull. Once again, Rinne insists that she step outside into the sunlight. She has “soot blight syndrome,” so the sun will kill her. It’s just funny, because the OP starts playing immediately after this scene, and what should we see in it? Rinne frolicking in the sun. Alright then. Anyways, Setsuna will come to learn, however, that although the disease is apparently real, the girl doesn’t actually have it. This is according to her mother, anyways. Five years ago, the girl disappeared, and when she returned, her memories were gone. As a result, she’s been clinging ever since to the island’s most infamous legend. Ah yes, the legend. The legend of incest. Why am I not surprised?

Basically, a former Rinne fell in love with her brother Setsuna, and this made a former Karen very, very jealous. As a result, she went to a former Sara to curse turn Rinne into a monster. The latter then killed herself, because monsters can’t be loved. Trust me on that. In order to lift the curse, Setsuna would have to reunite with Rinne when she revived at some later date. Isn’t incest just swell? But anyways, I think the legend only came about because the stupid sunlight-killing disease cropped up. It’s being used by the three major families to maintain control of the island, but it’s hard for me to see how this is the case. After all, Sara’s parents apparently died in some fire. Rinne’s mother is a shut-in who never leaves her room. The only person who seems to exert any control over the island is Karen’s clownish-looking father. But control over what? 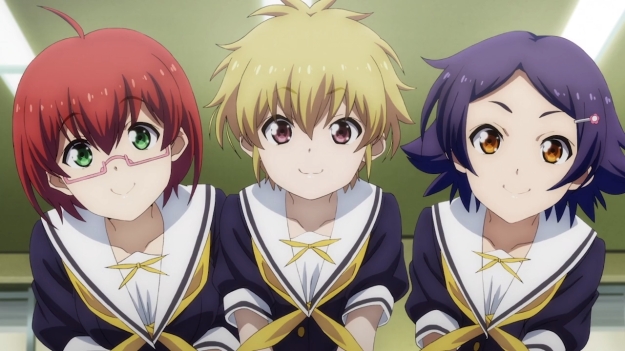 As Setsuna explores the island, with or without one of the three main girls by his side, he finds practically nothing but empty streets after empty streets. Like I asked last week, where is everybody? A dying island is one thing, but this place looks practically abandoned. It’s a ghost town. The main character might run into Karen’s high school friends, but none of the other kids. Even when we get to see Karen looking bored in class, the camera never pulls back to reveal the rest of the classroom. I don’t even know if there are any boys her age on this infernal island. At some point, Setsuna and Karen do come across an old lady selling shaved ice. She, however, eventually falls weak due to the soot blight syndrome (so it’s real). As a result, we get to see an old doctor. So yeah, just young girls and old people on this island so far. The policeman from last week’s episode is the only young man that we’ve seen besides Setsuna.

Anyways, other relevant facts that you might need to know is that Karen’s mother ran away from the island five years ago. I’m sure this incident is somehow related to the “intricate” central plot involving Setsuna and the other two girls. In any case, the girl wants to save up enough money to leave and find her mother. You can tell she’s in her rebellious phase, because her outfits are way too revealing for any high schooler, Japanese or otherwise. She ends up getting a part time job as a maid for Rinne, which leads right to bog standard anime fanservice. As for Sara, her parents died from an arson incident at the shrine also five years ago. She originally stayed with Karen’s family, but she ran off to be on her own. Even so, it’s funny how tragedy struck all three girls at the same time. 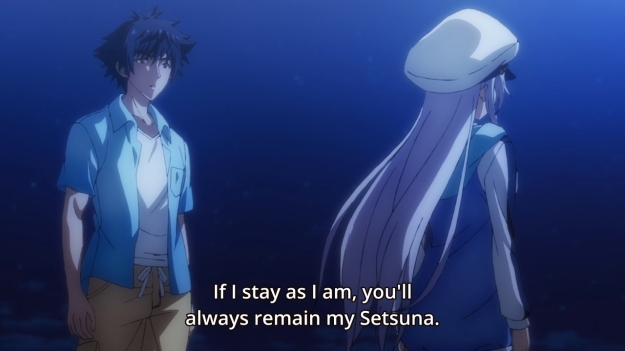 Somehow, Setsuna is supposed to unravel this mystery and save Rinne, Karen, and Sara from… from what? Honestly, I don’t even know. Rinne’s mother insists, however, that only Setsuna can take care of her daughter. After all, the girl is fixated on the legend, and she desperately wants Setsuna to be her fated prince. Still, I don’t understand why Kuon would put her trust into the main character at all. First, she barely knows him. And second, she wants him to save her from experience the curse for the rest of her life? She’s got all this money, so you’d think she’d fly in top notch psychiatrists to talk to the girl. Or maybe just leave the island herself and drag Rinne to some professionals. But nah, a strange dude showing up out of nowhere is truly the key to saving her daughter. Yep.

All I’m saying is that the story isn’t really coming together. If anything, it sounds inane and nonsensical. It definitely doesn’t look strong enough to convince me that I want to watch what looks like a grown man spending all his free time with loli-looking high schoolers. If the focus was on the main conflict from start to finish, I might be able to stomach it. But the anime often veers off course to give us more typical anime bullshit like the guy blushing over a pair of panties in his hands. This just tells you the maturity level of both Setsuna and the show’s target audience. They’re just panties. Practically everyone has undergarments. Get over it. I’m going to start looking for other shows to blog about on Sundays, because I don’t think this series is going to cut it. But anyways, here’s your moment of zen: