— What a ridiculously oversized… ribbon. But seriously, who actually wears a ribbon like that in real life?

— It’s clear from this flashback that Ayano loves badminton a lot. Almost too much. Just probably not as much as her mom.

— Oooh, her own mom told her to quit the sport, then left to coach the new talent. To make matters worse, Ayano didn’t really have anyone to turn to for support. Sure, she had her best friend, but Elena was and still is just a kid.

— I wonder if her mother wanted to spare Ayano from a certain life. I’m not trying to justify her actions, but parents often do the wrong thing because they think they know better. They want so badly to prevent you from making the same mistakes as them that they get tunnel vision. I’m just curious how she went from being a loving mother to abandoning her child in such a short amount of time. Plus, where’s the dad in all of this? Do I even want to know? Hell, who is she living with right now?

— It looks like the girl mostly coped on her own. She pulled herself out of her depression and tried to make the best of a shit situation. I gotta commend Ayano for that. She’s pretty mentally resilient. How many of us could honestly handle being left behind by our own mother at that age?

— Elena is pulling out all the stops to get her best friend onto the badminton team. At the same time, however, Ayano isn’t really putting up much of a resistance. I feel like anime protagonists just do whatever people tell them to do. It’s not that I want her to quit the sport. After all, she’s the heroine, and what would we do without her? But in general, I just find it strange how these main characters love to pout and slump their shoulders, but at the end of the day, they always go along with the flow.

— It’s kinda nuts how quickly Nagisa has changed her tune. She’s now being a good, supportive teammate. Maybe this is how she used to be before she went into her slump, but all we’ve seen is her berating the other girls up until the end of last week’s episode.

— Speaking of which, everyone’s just gushing over Ayano’s arms and limbs.

— Ayano and her coach are volleying back and forth so quickly that the entire gym is shocked and awed. Apparently, they both have unreal reflexes and reaction speeds. Is this scene realistic? I’m not actually trying to be critical; I honestly don’t know. I’ve never watched two badminton players going at it. Again, tennis was my sport of choice. The only person I know in real life who plays badminton is pretty much the biggest loser ever.

— It’s also interesting how our heroine doesn’t look like she’s remotely out of practice, but she was undoubtedly better back in the day. Nagisa later says that Ayano was practically perfect back then. So why would her mother choose someone else over her? Did it really come down to talent? Or perhaps something else…?

— Elena looks so bored. Or maybe she’s thinking about the past. Who knows? But she’s the only person not enthralled by the display of skill in front of her. She’s probably seen it a thousand times. She eventually ditches practice to go to the movies.

— I like this girl overanalyzing emojis. That’s pretty much what everyone does.

— I guess Elena feels as though she’s not needed…? She feels left out? After all, she doesn’t even play badminton. But I doubt she’s unneeded. No one else there knows anything about Ayano. 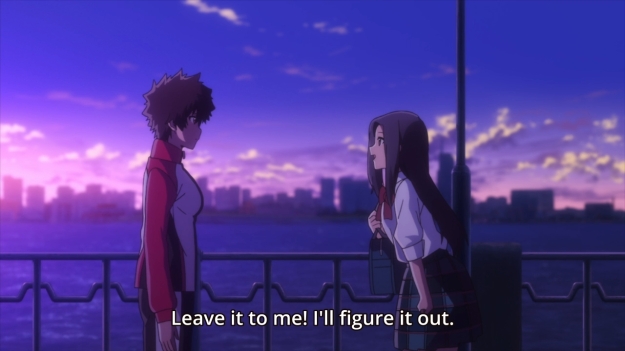 — Nagisa wants to know why Ayano had quit the sport, but Elena doesn’t answer the question. She simply insists that she’ll save Ayano somehow. Hm. I guess you shouldn’t share your friend’s personal business with others. Oftentimes, we rail on anime characters for not communicating, but I can’t hold it against Elena here. If I was Ayano, I wouldn’t want my best friend to talk about my family drama either.

— But really, what about Elena? She’s putting forth so much effort for Ayano, but who’s looking out for her? Friends are not bottomless wells of support. Eventually, they run out of energy and patience as well. It’s a give-and-take, and it’s hard to see what Ayano is giving to Elena in return for all the help.

— Nagisa’s being a bit dismissive here.

— Oh man, I had completely forgotten about this twin-tailed girl. In a show full of mostly realistic-looking characters, we suddenly have someone who definitely belongs solely in an anime. Sorry, but she looks ridiculous.

— Apparently, Pinky McTwinTails over here is the ace of a rival high school. She even challenges Ayano and is winning easily. Our heroine looked kinda shaken when she first saw the girl. Hm.

— After the humiliating loss, Ayano insists that she’s going to quit the team. The next day, she didn’t even bother coming to school. Now I’m really curious what her current home situation is like. Looks like we’ll find out real soon.

— Kentarou’s not going to let a star player slip out of his grasp, so he’s enlisted Nagisa to help him pay Ayano a visit. I don’t think I’ve ever seen any of my grade school teachers outside of school.

— A confectionery shop? Oh god, we’re about to see a pair of adorable grandparents or something, huh?

— Hm, her mother was masterful at badminton (I hate how her shirt clings to her chest like that). Obsessed with the sport, you might say. It’s starting to look like she didn’t want her own daughter to go down the same road. I’m actually hoping that this isn’t the case, because I don’t want the story to be so trite.

— Meanwhile, Elena knows exactly where to find her best friend.

— What the hell? Apparently, Kaoruko literally infected Ayano with a cold back in middle school in order to win a match. That’s biological warfare.

— A sick girl shouldn’t be pushing herself to play a match. Even the best athletes in the world know how to rest their bodies and not risk further injury.

— From Ayano’s perspective, her mom left because she lost a match against Pinky McTwinTails. Our heroine then dedicated herself even harder to the sport, but no matter how many matches she won, she couldn’t convince her mother to return. The woman still decided to coach someone else up. Ayano probably couldn’t help but feel as though she had been replaced as a daughter. So why bother? Her reason to quit badminton is understandable enough.

— A lot is left unexplained, though. Could a mother really abandon her daughter over one loss? Maybe. Maybe she’s evil. But I dunno. I still really feel as if she didn’t want Ayano to turn into her. She saw how her daughter pushed herself to compete even with an illness and decided that the best remedy was to abandon her completely. That’s still stupid and heartless as fuck, but it makes a little more sense than shunning your own daughter over one loss. But we’ll have to wait and see, I guess. People are never too dumb to pull the dumbass stunts that they come up with.

— I’m a petty person, so if I was in Ayano’s shoes, I would’ve wanted to beat my mother’s new prodigy. Then again, that’s all talk. You need to have an immense amount of drive to be that good in the first place, and I definitely don’t have that.

— In the end, Elena decides to turn to Nagisa for help. Ayano and the team captain are both in love with the sport. Elena doesn’t share this obsession, so she can’t relate to her best friend on this level. Nagisa, however, might be able to get through to the girl. Nevertheless, Elena cares about Ayano so much that she’s willing to put aside her ego to help Ayano any way that she can. Her selflessness is really quite remarkable.

— The rest of the team eventually congregate at the playground, and we soon see afterwards that both Ayano and Elena have officially joined the club. I guess it just comes down to separating the sport from her mother and having fun with it. But like with Nagisa, it kinda felt like we tied a neat, little bow on this problem a little too quickly for my tastes, though. I think I would’ve explored this subplot a little longer, especially considering how it concerns our heroine and her motivations to play the game. But ah well, this is still the best sports anime at the moment for me.

1 thought on “Hanebado! Ep. 3: One childhood trauma at a time”