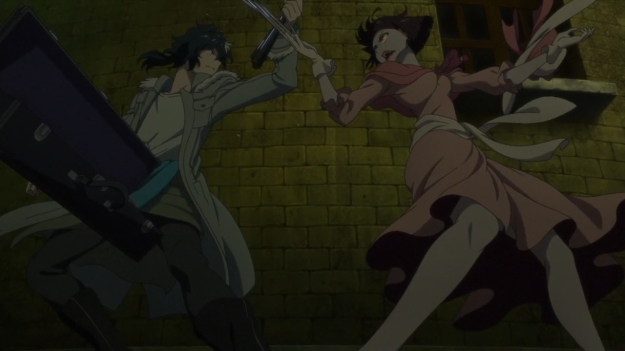 Better late than never, right? It looks like I’m going to have to shift my schedule around to account for the fact that this anime needs to be fansubbed. Hey, I like paying for my anime as much as the next person, but when Netflix pulls these stupid stunts, what option have I got? I even have a Netflix subscription, so whatever. Anyways, I don’t expect this show to blow me away or anything, but I’m just dying for something to get excited about. So far, the only summer anime that I’m really looking forward to every week is Asobi Asobase (love that ED). Unfortunately, that’s a comedy, so it doesn’t have any plot — good or bad — for me to chew on. And so far, I have a Banana Fish, a badminton show and… and… what? Is that’s it? Hoo boy, that’s bad. I don’t need Tenrou: Sirius the Jaeger to be stellar. I just need something somewhat marquee-ish to talk about. Alright, enough nonsense. Let’s get started.

— I’m not racist but these folks all look the same. Just sayin’.

— Instead of adapting, this clan — of vampires, I’m assuming — would rather mold the world to fit their needs. I mean, that’s still adaptation, is it not? I can’t chase down a deer, but I can sure as hell put together a gun to hunt them down. Isn’t that me adapting to my environment? I dunno, maybe it’s a matter of semantics.

— Must have been cheap, shitty wine.

— So the dudes are all bad guys? And all of the women in this room are victims? This is just a party for male vampires? 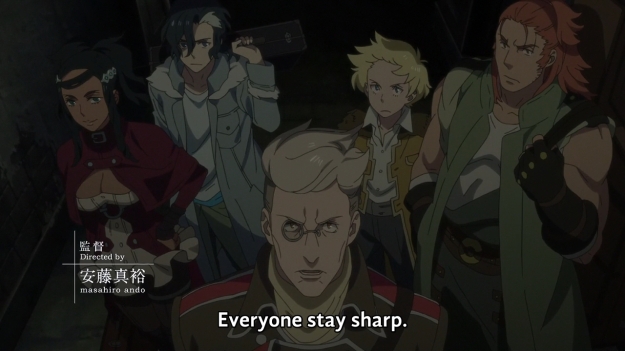 — Our hero has arrived with the rest of his team, but he takes off on his own as soon as he smells blood in the air. It sounds like he’s a loose cannon. He’s outta control. A maverick. Something like that.

— His weapon’s got some rather tiny blades. I guess I’ve come to expect something a little more bombastic from anime.

— Can’t say I really love the monster design here. They look rather apish and thus silly. But maybe the eventual story wants to lean hard on the evolution/adaptation angle, so this is why we’re getting such an bestial version of a vampire.

— The animation is nicer than your average show for sure, but it’s no KyoAni. PA Works is solidly a notch below them.

— God, do you ever feel for the poor sap who has to do the clean up in the aftermath?

— Nevermind. The vampire corpses end up turning into dust. Still a mess, but a little easier to deal with than a room full of blood and dismembered limbs.

— It sees that the good guys operate under the public-facing name “V Shipping.” But really, they’re a band of vampire hunters known as the Jaegers. And even though the setting eventually shifts to industrial Japan, our protagonists are all foreigners. That’s interesting.

— On the other hand, the Professor asks Yuliy if he feels nostalgic. Our hero says no, but maybe he’s got Japanese blood in him or something. Y’know, despite his Russian-sounding name.

— Speaking of Japan, it appears to be rocked by both political unrest and a recent spate of murders. This unfortunate string of killings is being blamed on an escaped convict, but it’s obvious that the vampires are behind this.

— She’s not wrong; I kinda like Dorothea’s character design. Unfortunately, she’s more than likely not the love interest. Our hero needs a bog standard Japanese maiden, especially one that epitomizes purity.

— Like this girl! Just look at her. She’s got main love interest written all over her blushing face. Geez, did she fall in love at first sight or something?

— I also cheated. I looked up the cast for this show, and Ryoko is voiced by Takahashi Rie. Yeah, she’s a bit notable. On the other hand, Dorothea’s voice actress hasn’t had any big roles in anime yet, but fun fact: she was the runner up for Miss Universe Japan in 2012. Gosh…

— And just for good measure, the voice actor for Yuliy was also everyone’s favorite Hiro from last season’s hit anime DARLING in the FRANXX. Hopefully, he won’t have to proclaim his love too many times in this series.

— Once again, Yuliy splits off from the gang just because he smelled something. This time, he smelled flowers. What is he? A dog? Wait, is he a werewolf? I know vampires versus werewolf is a thing, but c’mon… is he really one?

— I dunno why this girl has such an inordinate amount of interest in our hero already. This is the first time they’ve met.

— He tells the girl that the flowers will soon die, because they’ve supposedly been spoiled. Look at Mr. Botanist over here. Man, the story really wants to work this adaptation angle, huh?

— Anyways, we’re still in the set-up stage of the plot, so the first episode has to painstakingly introduce all of the various factions to the audience. We already know that the central conflict involves the Jaegers and the vampires. There’s also the Hyakko Party, a group of anti-government protesters. According to the government, these guys are really just robbers. But I mean, who can you really trust here? You also got the military, and they’re none too happy about the fact that Home Affairs has asked the Jaegers to lend a hand in Japan. No one likes foreign involvement. But in addition to that, it sounds like the military might also be up to no good. Last but not least, we have the lovably bumbling police force. You always gotta make a fool outta somebody.

— So what are foreign vampires doing here in Japan? Is Japanese blood really that superior to Western blood? Are they weeby bloodsuckers now?

— Yuliy tells his comrades that they won’t ever truly comprehend a vampire’s mindset. Oh boy, sounds like he isn’t really human.

— Philip, the short blond guy on the team, then taunts our hero by calling him a pup. Yep, he’s a werewolf. Ah well.

— As if it wasn’t obvious, the murderous convict was broken out of jail simply to serve as a scapegoat. The vampires can ruthlessly murder and feast on civilians, and the police are too stupid to realize that they’re chasing after the wrong person.

— This lady appears to be the only female vampire in the story. For now, anyways. They look kinda dumb when they’re about to attack.

— In less than a day, our team of Jaegers have already managed to crack the case. Yuliy tries to confront Agatha in an alleyway, but I don’t know why he doesn’t just surprise attack her instead of giving himself away to the enemy.

— A high speed car chase ensues, and I’ll never understand why these are almost always rendered in cheap-looking 3D now. If they can animate Yuliy’s fast-paced duel against Agatha, surely they can also draw a few cars on a road, right?

— These fire effects are especially bad.

— I mean, the direction is alright, and the animation in general is pretty smooth. But when you have what looks like a solid B-package, it’s the little blemishes that stand out.

— How come she gets to stay in her human form? All of the other vampires transformed into something more animal-like. Is it because we want her to stay hot?

— Yuliy is apparently one of Sirius’s something something. In fact, he’s probably our… wait for it… Sirius the Jaeger.

— Agatha literally pays an arm and a leg for her crimes, but she still manages to get away. Why? Apparently, she’s a Royal… whatever that means. Well, one thing it does mean is that she can float somehow. Yep.

— Also, she got away because this guy interfered. Kinda reminds me of the gun-toting bad guy from Kabaneri of the Iron Fortress.

— It looks bad initially, but our hero only suffers a blow to the shoulder. He should be alright.

— This ED is terrible. Literally just the perspective of someone looking up from a boat or a vehicle.

— In the after credits scene, we are introduced to a more stereotypical-looking vampire in Russia. This is quite the international anime.

— So what are my first impressions of the show? Well… it doesn’t have a heart yet, so there’s not much that I can say at the moment. “Yet” is the operative word. Tenrou: Sirius the Jaeger‘s episode is so concerned with setting up the story that there is really little else going for it. Hardly any characterization yet. Hardly any subtext either. It’s literally just a whirlwind of events to get us up to speed on this Jaeger versus vampire world that PA Works has crafted. And hey, there’s nothing wrong with that. For now, at least. With just one episode under our belt, I’m not going to go and lambast the show. But yeah, there’s just nothing to evaluate but the animation quality, which was alright. Speaking of which, I’d be lying if I said I wasn’t expecting a little better from PA Works, but compared to most shows, it’s more than fine.

2 thoughts on “Sirius the Jaeger Ep. 1: Another age-old conflict between vampires and werewolves”