I guess I should watch this show even though it’s also afflicted by the same problem as Tenrou: Sirius the Jaeger. If you’re curious about Kakuriyo no Yadomeshi and Phantom in the Twilight, I might cover them tomorrow. Again, I’m tweaking my blogging schedule a bit, because Netflix pretty much mucked everything up. Anyways…

— Oh, this whole show is in 3-D. I don’t really mind it as long as the anime goes whole hog in this direction, I guess. I think it actually looks pretty good here. Well, it’s certainly not as bad as that last fully 3-D anime I saw. What was that show called again…? Oh yeah, Knights of Sidonia. Ugh, lots of bad memories there.

— Haruo is the main male character of the show. He’s pretty much mediocre at everything but video games. How inspirational. His counterpart is Akira, a rich girl who is even better at games than Haruo. She’s also smart. But other than that, I don’t know much else about her yet.

— This appears to be a love letter to 90’s arcade games. I wish I could say that I’m an expert on this topic, but sadly, this is not the case. I was never really allowed to waste my money at the arcades as a kid. I spent most of the 90’s playing platformers like Mario, Sonic, and Mega Man. I didn’t even get around to touching JRPGs until midway through the decade. Plus, it’s not like a lot of the games being shown in the OP were ubiquitous in the West anyways. Once in a blue moon, I would get to play The Simpsons beat’em up. Or maybe Teenage Mutant Ninja Turtles 2. Sure, I owned a copy of the original Street Fighter II, but with only the AI or my stepdad as potential opponents, I hardly became an expert the game. I got proficient at Chun Li, and… well, that’s about it, really. 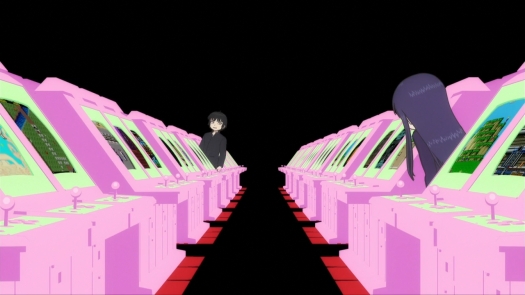 — The OP kinda gives off the vibe that the Haruo and Akira would eventually develop a romantic interest in each other. But considering their ages, I seriously wonder if this pairing would honestly come to fruition over the course of the short anime adaptation.

— I guess you could say that girl gamers were uncommon in the early 90’s.

— “Forcible Finger?” I don’t know if it’s the fansubs or if that’s really his nickname. If I had to guess, the subs are probably being a bit too literal in this case.

— No matter the decade, nobody likes players who turtle. It’s bad enough that you have to use a top tier character like Guile against Zangief.

— Getting cocky after one round. Yeesh.

— This peanut gallery is annoying. The kid was shameful for turtling. Now the kid is manly for fighting fair in the final round. Make up your damn minds.

— God, I do not know this much about Street Fighter II. Look at all the useless knowledge that I am currently gaining by watching this show. But seriously, the last time I touched a fighting game was probably Street Fighter III: 3rd Strike. I’m just done with the genre in general. Dragon Ball FighterZ looked cool, but I just know I don’t have the time nor the patience to “git gud.”

— I actually expected Haruo to lose to Akira again despite his lame tactics. I guess he gets his cheap win for now… 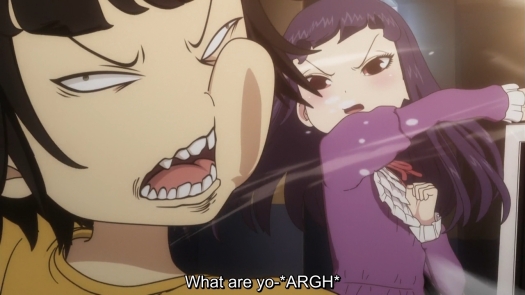 — Oh wow, they’re both brats. Before it was suddenly cool to be into gaming, I guess a good majority of gamers would be considered socially maladjusted.

— Haruo may have won the match, but he lost the war. But c’mon guys, it’s just a game. I’ve seen videos of people punching a hole in the wall over a video game. I just don’t get it.

— Does Akira ever talk? We’re nine minutes into the anime, and so far, she’s only grunted.

— Oh wow, this is now an ad for the Street Fighter 30th Anniversary Collection. I wonder if they got any money from Capcom for this. Actually, Capcom probably helped them with all the Street Fighter II stuff. Anyways, no thanks. But I am going to pick up the Mega Man X Legacy Collection once I get paid on Thursday. I know the games are trash after X4, but eh, it’s my childhood.

— Haruo wants to make a living off of playing video games. He just has to wait another decade or so to become the next Daigo. Or get into MOBAs. Yeah, MOBAs are kinda lame, but I think that’s how you make the most money as a gamer. There’s just a bigger audience for either League of Legends or DotA 2 than probably every fighting game put together.

— Akira is smart, pretty, and rich. She also mains Zangief. Last but not least, she can even win with busted cabinets. Some people just have it all, I guess.

— Speaking of which, I always thought Sagat was harder than Bison. Oh right, he was called Vega in the Japanese version. He wasn’t so bad, though. Just overwhelming the first time you fight him.

— Splatterhouse? Dude, I’ve literally never played this game. Was it honestly ever in the arcades in the West? I don’t recall ever seeing it.

— Twelve minutes into the episode and she still hasn’t uttered a single word. The girl just starts chasing him out of nowhere.

— I dunno, for a comedy, this hasn’t made me laugh. I’m mainly only tuning into the show for the video games. The kid’s ranting and raving all the time is actually kinda annoying. And since Akira has yet to utter a single word, she’s not much of a character yet. I just wonder how long the show’s singular gimmick can keep me interested.

— One day, Haruo throws a match against some random opponent, because the guy sounds like rager. Then again, Akira literally punched him ’cause he played cheap so…

— But here comes Akira to the rescue. I mean, what’s the rager gonna do? Beat up a girl in real life?

— Wow, the rager’s girlfriend is a rager too. The perfect couple does exist.

— Haruo tries to step in and defend Akira, so he eats a bunch of physical punishment in her stead. The girl then gets up and retaliates against them. Eh, is this supposed to be amusing? I don’t really care for randomly beating people up. It’s not funny, and the show has barely any story right now. All we have is a bunch of talk about old arcade games and non-stop crooning over Akira’s amazing gaming abilities. The violence is leaving a bad taste in my mouth, so honestly, this show seems kinda overrated.

— Jesus, talk about obscure video games facts. Akira is taking advantage of an odd quirk in Final Fight‘s programming to maximize her score. I guess that’s the only way she can feel challenged in a video game these days. 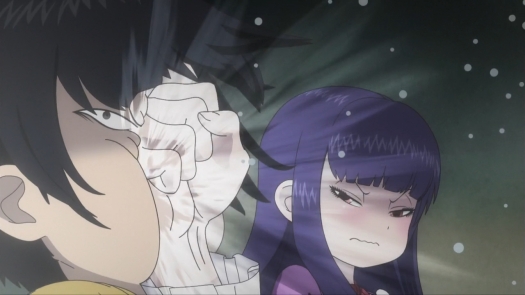 — In the episode’s final mini-story, Haruo gets in the way of Akira trying to get the highest score in Final Fight, so every time he screws up, she hits him. I know the violence isn’t serious. I know it’s supposed to be slapstick. Hell, he literally gets hit by a car shortly afterwards, so you definitely know that the violence isn’t real. But I guess I just don’t find it funny?

— After they both finish the game, Haruo apologizes to Akira by getting her a lollipop. He also got one for himself, so she takes both of them. Eh.

— With only one episode to judge, I don’t find the show very appealing. It’s boring. More importantly, the characters are unlikable. Haruo is grating to listen to, but Akira is somehow worse even though she never speaks. If there’s a compelling story here, the first episode doesn’t do it any favors. I guess I’ll give it one more shot, but so far, it’s not look too hot.